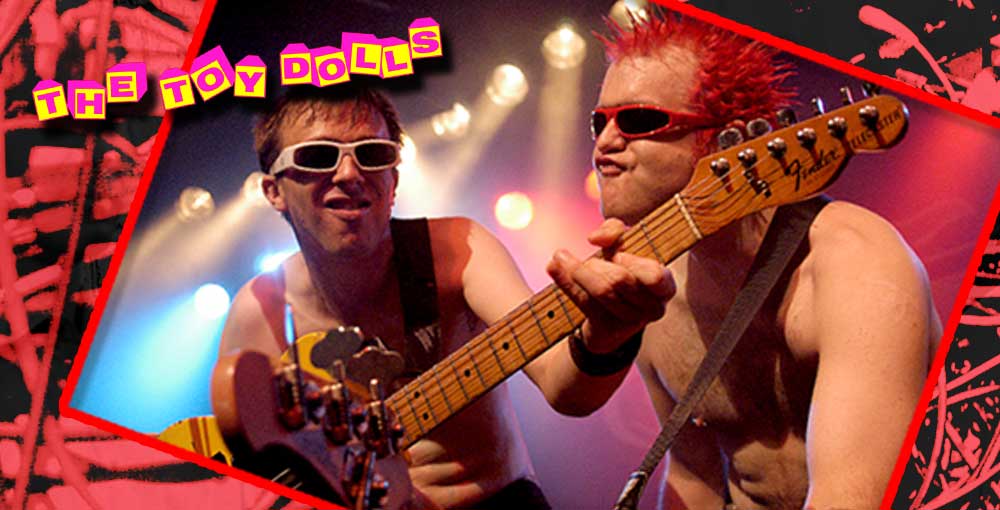 The Toy Dolls are a band renowned for a frenzied sound and an explosive stage show, fronted by founding member and guitar playin’ lunatic front man ‘Olga’. Recently the band recorded their first album in 4 years ‘Our Last Album’ following this up with an extensive tour which saw almost all the shows sold out in sixteen European countries. This band has been going for 27 years now and would seem to be as popular now as way back in ’79. We caught up with Toy Dolls bass player Tommy Goober down the pub to ask him a few questions about life in The Toy Dolls…

Hello Tommy, give us a brief history lesson of the band
Well, Olga formed the band 27 years ago in the North east originally, started by playing locally and then made it further down south, released lots and lots of albums, toured all over the world, got on the telly with ‘Nellie the Elephant’ and had a million different people on bass and drums over the years. More recently I joined the band and we released ‘Our last album?’, ‘Our last DVD?’ and did a big old tour called ‘Our last tour?’ which hasn’t actually finished yet. We just got a new drummer called Duncan who’s from a band called Snuff and Billy No Mates. He used to be in Gun’n’Wankers n’all, Brill. We just recorded a live album which I think is out in July.

How would you describe the sound of The Toy Dolls?
Hard to say, when I first heard the band it was like nothing else I’d heard before, quite quirky, a bit mental, defiantly a punk sound, but not like any other punk band I’d seen or heard. Olga thinks he sounds like Orville the Duck but I don’t see it myself! That wasn’t a very good description was it?

How did you get to be in The Toy Dolls?
Olga (singer/guitarist) was playing bass for a band from L.A. called The Dickies and I was their backline technician for that tour, we had a good laugh on tour and I gave him a cd of a band I play in, sort of Crème Brule style “here have one of me demo tapes”, and I reckon he must’ve been really hard up for a bass player coz a year later he called me and asked if I wanted to try out for the band. He must’ve been pissed when he decided I was the man for the job!

So you play in other bands, tell us a bit more…
I play in Goober Patrol and Vanilla Pod also. I’ve been playing with The Goobers for over 10 years, we don’t play so much anymore, but had a right laugh touring all over. We really fluked it and got signed to Fat Wreck Chords in the States and did a few tours over there. We were also lucky enough to do a Peel session too. I joined Vanilla Pod a few years ago and we’ve done a few tours which also have been a really good laugh! We’re gonna record a new album soon.

What’s it like touring with The Toy Dolls?
It’s a lot different from playing with the other bands, there’s a lot of singing for me to do which I’m not too good at and the actual show is about 3 times as long as the other bands. The first tour was quite mental and the festivals we did were even more mental. It was great to play with some brilliant bands like NOFX, Bad Religion and it was great to play with The Dwarves, they know the rules. It was funny playing the same show as Alanis Morissette, she was really short and didn’t talk to us. The crowds that come are really excellent; a cross section of all sorts really, not just Punks and skinheads which I originally expected.

Where are you touring next?
We’re off to Norway for a week in May, a few festivals and at the end of the year we’re heading to Japan, North and South America, nice one!

Has anything funny, embarrassing happened to you on stage?
Err, in Germany I had Olga on my shoulders playing a song and I fell over, it was a right disaster.

Are there any local bands that are worth checking out?
There’s a few good bands at the moment in Norwich, my particular favourites are Visual Offence and Semtex. Project Mork are good but I don’t know if they’re playing at the moment. Unfortunately a lot of good bands from here have split up.

Marmite. Love it or hate it?
I like it, isn’t it quite good for you or was that a lie?

For more info on the band check out – http://www.thetoydolls.com/