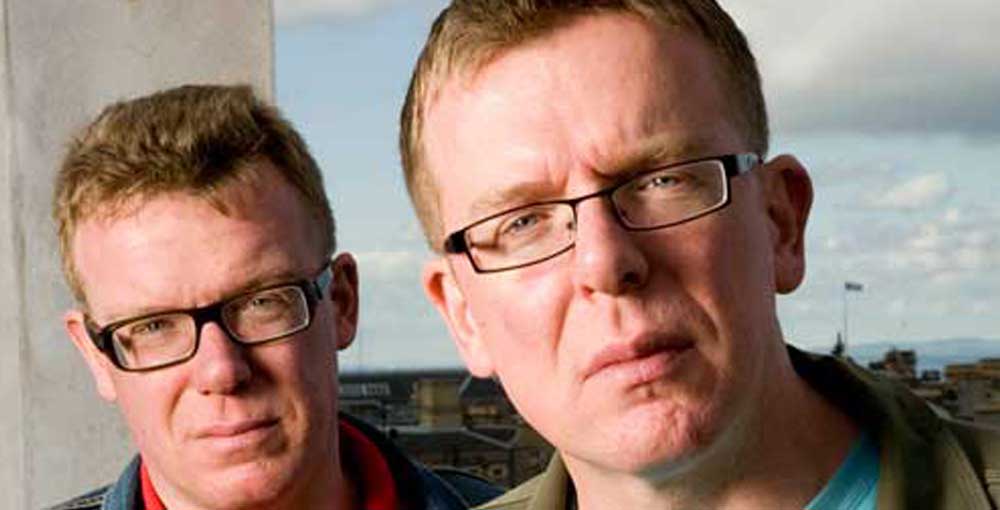 As youngsters was being in a band with your brother something you envisaged doing?
I don’t think so, at the time when we started playing and just before we got signed we had been unemployed for quite sometime. I think allot of bands at that time were. So the main thing was getting off benefits and getting on the road and playing in a band. I don’t really envisage that it was the same. I think what you wanted was to get out there, do what you want and make a living out of it. I’m not saying it don’t cross our minds that we could do better but it wasn’t the main thing. It was just getting out there and playing professionally.

Who was the naughtiest twin?
I look back and I think we were both at it quite a bit. I wouldn’t say we did anything terribly bad but we were slightly devious. I think my dad was very strict, probably stricter than most people at the time. There wasn’t any badness but there was certainly dodges and stuff. In those days in Scotland you used to get belted over the hand for any Mr Meaner and if you screwed up at school, so we used to get belted quite a bit, but everybody did. I certainly don’t think that we were any worse than anyone else and I certainly don’t think that my naughtiness exceeded my brothers, it was a 50/50 thing.

Who influenced you and your brother musically and professionally?
The Beatles – that was just an influence whilst growing up, they were a cult when we were children. The Punk movement was a massive thing in getting out and doing stuff your own way. The Clash, The Buzzcocks, The Sex Pistols, we had a lot of influences, anything from the British Pop thing to punk to the old jazz or blues records.

What would you walk 500 miles for?
To be in the Scottish cup final (laughs) or any of my kids, my mum, family, anything that you love! I actually like walking, but I don’t like it that fucking much.

What was it like working with Mat Lucas for Comic Relief?
Absolutely fantastic! We’ve met Mat a couple of times; he’s a bit of a Proclaimers fan from way back. We didn’t know Peter Kay but we got to know him as well, they were fantastic. To work with, I suppose were almost the two most famous comedians in Britain at the time. It was fantastic, a great honour for us, we were really happy to do it, they were really nice lads.

What was it like playing at the Champions League final at Hamdon Park?
It was brilliant! We went on, did it and had to stand on this platform which was in cased inside this huge football. It was pretty cheesy, we felt slightly ridiculous but we came off and walked up the steps and got a fantastic view of the game, the best seats we have ever had at a football match and we had a great view of the winning goal. Anybody who’s a football fan wants to go to a European Cup final and to see it in your own country and to be a part of it was wonderful.

Who are your favourite bands at the moment?
I’ve gotta say some of the bands that have come through in Britain in the last 5/6 years are as good as anything I’ve heard in Britain since I was a kid. And then that was as good as it ever was in Britain with the Beatles and The Who and stuff. I think the level of song writing now has got really good again. The Coral are consistently really good, every time I look around I’m hearing a record that I enjoy. It’s really hard to pick one out, I pick a band out for a special appraise and there is so many people doing really well. For me The Red Hot Chilli Peppers are still a class of there own. I listen to as much Classical or Folk music as I do Rock, I just enjoy music. I saw an interview with Van Morrison recently and he said “It’s hard to hear something new in your mind” and he’s like 62. I know what he means, people rebuild it every year and it sound a little bit different. I like people who innovate, have good lyrics, and have good melodies be it Folk, Blues or Rock n Roll. As long as you believe the singer in the band and they move you, that’s what it’s about!

What do you put your longevity down to?
The number one thing is we like doing it. If you give a lot of energy off on the stage to the audience you’ll get the same in return, it’s definitely a two way thing. There’s 2 or 3 songs which people remember of ours that are played on the radio, the obvious “Im Gonna Be” is played a lot. People still hear these records, it still seems to mean something to them and you gig a lot then it keeps you in the public eye and somehow you manage to keep on going. For us now and in the past 6 years the live thing has been the main thing by quite a way.

We have noticed you have a busy schedule coming up…
Yeah, were off to Australia, New Zealand, Canada, and America. Basically when we put a record out we stay out as much as we can to justify the money paid to the band. You’ve gotta wanna do it.

What was V like?
We played the first one in essex, they were both great gigs, I think the best back to back gigs we have played in a while. The weather at Essex was great, or good, but the weather at Stafford was terrible, I really felt for the people out there because it was consistent rain. But really great gigs, I gotta say well organised. Nowadays there are so many festivals going on and they do seem to be better organised then they were before. In a way that may take out the hippy romance out of it but we were treated really well, the audience were fantastic. 10/10 for the people standing out in the rain at Stafford because I don’t know if I would have done it.

What can we expect from your new album?
I think there’s political shatter, it’s mostly personal songs to us. I’m just interested in the world and the way it’s developing. It’s a very interesting time to be alive. There’s times you see changes that won’t be reversed. I’m interested in the fact that we have a whole generation of politicians in Britain and America who have never ever served in the arms services but are happy to send other peoples sons away to do the fighting and dieing. I think there’s a dangerous gap developing between the rich and the poor in this country and all other the world at the moment. People talk about the change in temperature but what is going to be the biggest challenge is the movement of people from continent to continent. It’s a really great time to be alive and take a look at things and have a chuckle to yourself. I thought I had it all worked out when I was 20 but I didn’t know fucking anything, that I find quite amusing.

What’s your favourite track by yourselves?
Probably ‘Sunshine on Leith’ from the second album. It’s a ballad and certainly a slightly more reflective one. I think that’s probably overall, if I had to choose my favourite. I think the new record were about to put out is the strongest thing we’ve ever done. I’m gonna be intrigued to see how well it does, or how well it doesn’t do. Were 45 now so we don’t expect to appeal to the same audience that we did when we were 25, but I like to think that some of the audience stay with you and come with you. And that they, like us hope that the best artistically is still to come.

What are your plans for the future?
I really wanna keep going at this for as long as we can. I want to get really really good at what we do and I feel finally from the past 5/6 years we are in that kind of a realm. We’ve got a real momentum at the moment and I want to keep that going for as long as we can. Beyond that I want to write better songs, I think that’s what people remember you for, they don’t remember you for anything other than the quality of what you do. That’s what endures, if you want to be remembered you want to get better at what you do, what ever it is you do.