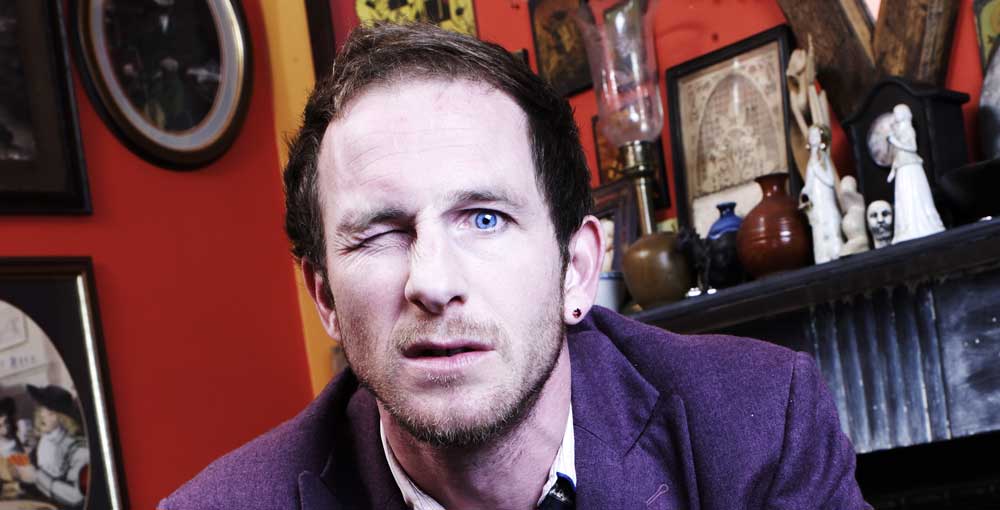 What was your childhood like growing up in Wembley?
It was interesting because you never quite knew what you were going to open the doors to. It could have been a trippy bloke going to see the Stones, the Pope whizzing by in his f**king caddy car or a Scottish football fan taking a dump in your front garden – Never a dull moment!

Was it always your dream to become an actor?
No, on the contrary. I wanted to be a sprinter which I gave up when I went to art school and started drinking and smoking. It wasn’t really conducive to that sort of lifestyle. Then I wanted to be a rock star and I played in bands in my 20’s. I got into comedy by chance just after I turned 30 and it seems to have turned out alright. I had no experience in it until I kind of did it for real really.

What were you up to before you played Dennis Pennis?
I was playing in a band called “We Are Pleb”, and I also had a job at the National Theatre in Tel Aviv painting scenery. Then I got a call out of the blue from someone who had seen this tape I had done. I did a tape wandering around with some mates in Leicester Square with a pair of glasses on being f**king horrible, and 2 years later someone got hold of me from Israel and said ‘We’ve seen your tape, do you wanna go to Hollywood and piss people off’? I said ‘alright then’.

How did you get so close to all the A-List stars?
Charm and a good accreditation; a good laminate can get you a long way! I got found out pretty fast and had a lot of drunken chases with security people and bouncers wanting to snap my fingers off!

Really, care to elaborate?
I got my finger broken in Vegas by a guy, a real good fella who had definitely killed men! I’d bugged the sh*t out of him trying to get hold of Elton John throughout the morning and he warned me several times to get the f**k out of this casino. There was a big mêlée and someone reached in from the crowd and broke my finger. I got my nose broken in Cannes too; it was pretty rough and ready. I think it was before celebs and their entourages realised it was actually quite a good thing to have a sense of humour.

Did the BBC ever get funny?
Yeah, they wouldn’t actually give me a proper BBC cube to put on my microphone so I had a fake one and I got told in no uncertain terms to stop using it. Internally it was all weird coz they kinda seemed to do their utmost to make sure I couldn’t get into any of the big events. Some of the more powerful people would go out of their way to get us thrown out of premieres and press lines. I even got arrested in LA in 1997 before the Oscars. We had an amazing spot right at the front of the Vanity Fair party but we got pulled out by the LAPD and kept in a portacabin for 7 hours. Which is really f**king annoying because I thought my job was far more important than his.

So is that the reason it phased out?
I always thought it was a one album band, I’ve always loved one album bands, you know Pistols, X-Ray Specs etc, it was smash and grab. I would have hated to have overstayed my welcome, cashed in and done a whole load of horrible stuff which would have stained the name. It lasted a year and I did 3 half-hour shows, and people are still talking about it so I’m glad I got out when I did y’know?

Did you ever feel you were taking a risk by creating Mike Strutter, such a politically incorrect, violent character after Dennis Pennis?
I dunno, I’ve always loved Les Patterson and I was brought up on that, and I’ve always got off on appalling stuff. I remember having a copy of ‘Derek and Clive Live’ under my mattress with my porn mags and my parents didn’t even know it existed. I suppose as generations become harder to shock you’ve gotta try a little bit harder to shock ‘em because people love to see stuff that they’re not prepared for. I think it was just taking it to its logical extreme, with everything that you can get hold of on the internet and all the rest of it. There was something exciting about doing an entertainment presenter who’s proud of things that normal presenters conceal i.e. the ferocious coke habit and alcoholism. He’s a modern TV presenter in my mind. He’s the TV presenter that TV audiences deserve.

Mike Strutter had a dig at James Blunt. Was that just harmless fun or do you both have issues?
Strutter just hates everything. He’s a total nihilist who’s on the verge of imploding at any moment and he’s just running on hate; no-one came out of the show particularly well. The targets are just whatever he can get hold of, and he will just rip them to shreds. He’s just got no time for anyone or anything and I think that’s what’s exciting about him- he’s got no redeeming qualities what so ever. He’s f**king fun to play and it’s good for me because I’m pushing into middle age. I lost a stone filming him because the pounds don’t half fall off when you’re kicking people to death! I tell yer it’s the Strutter fitness program.

You also starred in the comedy series Perfect World, presented a quiz show called Liar, and then went on to a slightly more serious role alongside Michelle Collins in Two Thousand Acres of Sky. What was it like playing a more serious role compared to the usual comic characters Paul Kaye previously played?
I don’t really like being a jobbing actor because I don’t really get motivated by things I know 100 other actors could do well if not better, so I’m always searching for things I can make my own and feel that no one could do quite like I do it. They don’t come along all the time but for me the drive is finding stuff that I can put my unique twist on. I’m not sure what it is or where it comes from but I think it’s that desire to do something original I suppose. Be original or die philosophy. Obviously I have to do a whole load of shit in between to pay the bills.

What music are you into?
When I was filming at Manumission DJing in front of 10,000 people all going f**king nuts to dance music, I had “Too much too young” by The Specials in my headphones. I’m old school; I’m still listening to the same old albums I listened to when I was 16; I’m a sad old b**tard.

Why the badger?
It’s a Canadian thing, I didn’t quite get it either, I mean I kinda got what it was supposed to represent…I think it’s a badger and it badgers you – is the depth of it. But I tell you it was the short straw for who ever got into the badger suit. It happened to be this poor kid in the end, and I think he lost about 3 stone in four weeks, because it was 45 degrees and he was basically wandering around in this massive hairy badger suit which we got off eBay.

How much was it?
I think it was about $500. I remember we were up against Star Wars when it came out…It was Chewbacca Vs the Coke Badger and unfortunately the coke badger got beaten to sh*t.

Was it really based upon a true story?
No that was bullsh*t, a deaf man as a DJ? It was making a point about dance music. There’s loads of websites in America that think he still exists and I think someone is writing a book about him. I mean, all the photos of Frankie you will find are me so it’s a bit of a giveaway.

Looking towards the future, what’s happening nowadays?
I would like to do more writing. I’ve just written a film which is called “Born” with a friend of mine and that’s very exciting. I actually originally wrote it for myself but as Kevin Costner once told me ‘I was a low budget guy’. I couldn’t raise the money with my name attached to it so I sold it and Paul Bettany is starring in it. Guillermo Del Toro who produced Pan’s Labyrinth is producing it, and Clive Barker who did Hellraiser is on board; Also, the guys who did Team America are doing the animation. It was kind of bitter sweet at the time because I was writing it for myself but I think Paul Bettany is a wonderful actor so I’m chuffed it is happening really.

When’s that coming out?
Well we’ve only just started filming it so it will be a year and a half to two years. That’s the bugger about movies, they take so f**king long to come out. I guess it’s another string to my bow and I do seem to spend a lot of my time not working, so I’ve got the confidence now to write. Bettany gets sent scripts and he picked mine, so that’s given me the confidence to get on with the next one really.

Before we say our goodbyes we would just like to ask you, do you have any messages for our lovely student reading population?
Just get f**ked up, enjoy yourself. When you leave college it’s all downhill!

What was your new year’s resolution?
Smoke more fags.