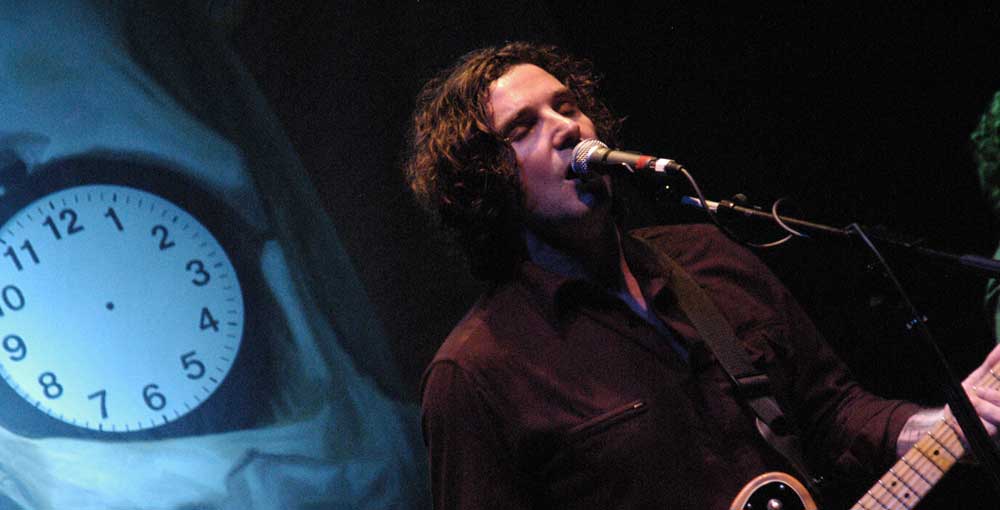 This is your first gig touring your new album Narcissus Road. I must say, I feel privileged sitting here speaking with you after that performance!

Anthony: You know what, I have just had one of the best nights of my life, Martin I’m not sure how you feel about it?!

You’re clearly going to be massive, how does it feel to be on the climb?

Anthony: Hopefully! I like your optimism there. There’s this quote which a couple of people have said that I think is quite good, that ‘by August The Hours will be unavoidable or forgotten’. I tell yer what though, know ones gonna fucking forget us, I’m gonna make that my business to make that the case. I don’t mean that in an arrogant way I just mean that we are not here to fuck about; we are here because of passion.

Martin: I think that’s a nod to the song writing that we have done. I think you either get it or you don’t. I think that’s what they are kinda saying? You gotta remember we are musicians and its f*cking hard being a musician and I just wanna be able to keep on doing it!

What would you say has been the hardest part of your career to date?

Martin: You don’t roll into work in the morning, finish and at the end of the week get a pay packet. Some people do anything and other people choose what they wanna do and if you choose what you wanna do then it’s even harder.

Anthony: The thing is if you choose the life of a musician as any of these guys will tell yer, or any creative thing then there is a massive amount of uncertainty to it. You don’t get into music for money and if you do then you’re a fucking buffoon. I don’t know what the percentage is but it’s gotta be .00% of musicians that actually make any money in their life time. You don’t get into music to make money, you get into music because you’re passionate about it and you believe in what you do. We have all been doing it for a long time.

How long have you been together then?

Martin: We’ve been performing for 6-8 months. But me and Anthony have been at it for about 2 and a half years. Writing and forging the sound of what this whole thing has become. The 2 of you doing that together in the studio is 1 thing. But if you wanna go and do it live then you gotta try and get a few more bods in, so we got all our mates involved.

Anthony: Ben’s just got on board and he’s a wicked drummer. I’ve known Pete for a long time, first time we met was when I went into his dressing room and demanded some drugs off him, I didn’t even know who he was did I Pete?

Anthony: Yeah, you new deep down that I was an alright geezer. But that was in the dark days when we used to be crazy. I’ve kinda gone off track now, it’s an uncertain life being a musician, and we’ve just arrived at this point now. In any other business any where in the world to be our age and to be doing something where you completely feel like you know what you are doing is completely expected. Whereas in the music industry, everyone expects you to be sorted by 23. When I was 23 I didn’t know who the fuck I was! I didn’t know anything, all I was interested in was getting battered. As often as possible at every awaken hour. I would have been happier if they pumped me full of drugs while I was asleep, it would have been much easier. I could wake up high… already battered! It just takes time, Francis Bacon was smashing paintings up when he was my age! Van Gogh sold one painting in his whole life and blew his own head off because of it.

Martin: Thankfully we’ve sold more than one record so we don’t have to blow our own heads off!

I bet its good when you see people singing along?

Anthony: It’s amazing you know I’m still shocked that human beings are going out buying our records and buying tickets to our gigs. I don’t mean shocked in that we don’t deserve it because I think we do, our songs are good and we are a good band live and we deserve to be seen. I’m not sat here in an arrogant way going ‘yeah you’ve gotta come and see us because we’re amazing’ it’s just that we’ve always had such a warm reception. Our music is honest; it’s out there and on the line. If you put your head on the chopping block you’ve got to be prepared for someone to drop the axe on you! People are holding up the guillotine and going ‘you know what? We quite like these lads, lets just keep them going for a bit and see what happens’.

Martin: We supported Kasabian a couple of weeks ago at Hammersmith Apollo, it was a good thing for us to do and we enjoyed it but seeing them and how they work their audience was amazing. By the end of their show it’s just like a sea of arms. And it’s like ‘I want some of that!’

Anthony: I thought we got that tonight, at the end of the gig there was a general feeling of euphoria. I really felt the energy from the audience. People had a genuinely good time. I always like to see the band on stage acting it all together. Jarvis was like that with Pulp so it’s almost a party on stage, in someway that you’re involved, you engage. It’s not just somewhere where you’re on stage going ’check us out, we’re fucking brilliant’.

Martin: Well there is a bit of that (laughs).

Who’s the craziest band member out of all of you?

Martin: These days that should really be who has the potential to be the craziest? It’s all about potential because we’re all pretty down to earth lads who just want to have a good time. We’ve done our ten years of craziness.

Anthony: Exactly, I’ve done craziness; I’m more into sanity now. If I was on a road towards craziness or sanity, for many years I was driving head on towards the wall of insanity. But now I’ve done a handbrake turn and am going the other way.

Anthony: After we’ve been on the road for a while and killed a few people. Butchered them and put them in concrete boots

So how did you hook up with Damien Hurst?

He happens to be our mate so he does our artwork, it’s that simple. He designed it and I went ‘yeah that looks good, wicked, respect. Shall we go for a pint?’ He’s awesome. I went to one of his shows last week in Beverly Hills. 29 new paintings and it was amazing. He sold all his paintings for 2 million dollars each…

Martin: Now there’s a man on a roll.

Anthony: But he believes it, he believes every idea. He’s a very creative person and he has been very influential to us.

Who else has influenced you?

Martin: Everyone I have worked with has influenced me. I’m definitely influenced more by people who I interact with rater than movie stars or rock stars. I need that physical interaction to be influenced by someone.

Anthony: Jarvis who I grew up with just on his level of realism and honesty.

What is your ultimate goal as a band?

Anthony: I’m looking forward to the time when we can play a great venue like Brixton Academy, where I’ve seen great bands play and had such great nights there and seen the audience so involved and passionate. I’m looking forward to going to one of those gigs but instead of going there, through the doors and turning left into the audience, I want to turn right and go upstairs into the dressing room, get ready then walk on stage. That’s what I want to do.

Martin: We’ve done that before with other people’s bands but this time it’s OUR band!

Anthony: No disrespect to anyone else and I don’t know what you think but We’ve both played main stage at Glastonbury in front of 60 / 70 thousand people playing ‘Rock The Kasba’ but it means nothing to me in comparison. I’m not saying that it didn’t mean anything to me, that time that we spent with Joe, but I much preferred hanging out with Joe in the dressing room more than I did on stage a lot of the time. Because if you are just singing someone else’s song quite literally then it doesn’t mean as much. That’s what it says on our record ‘You should sing your own song whatever that is whether you’re a butcher, baker or candle stick maker’. You’ve gotta get up every morning and go ‘yeah I’m gonna be the best fucking butcher, baker or candle stick maker’. People are gonna come in my shop and go fucking hell you seen that c*nts candles…Jesus they smell like heaven. You should love what you do in life and make sure you do what you wanna do because I’ve experienced things. Even yesterday, a friend of mine is seriously ill, I mean incredibly ill and I went to see him and its like fuck is this person going to live, and if they do what is he going to be like at the end of it? We are here for a fucking good time, not a long time! So don’t dibber about singing someone else’s song or thinking to yourself that I have got to succeed on their terms. Decide what you want to do in life and fucking do it. We are doing that the first time and that’s what feels good to me.

Martin: If we can take that as far as it will go. You know we wanna be playing Brixton and selling loads of records. Make our next album and carry on doing it. I’m gonna be doing this in 10 years time because I love it. Not only is it something that we are passionate about, it’s our living. It’s like you and tour magazine, you want things to happen for you. If it’s something that you put a lot of effort and time into, you also wanna bit of payback for it as well.

Anthony: Money, it’s a piece of paper, its nothing. When I went to see my friend yesterday and they were virtually in a coma I weren’t thinking ‘oooh did I save that £600 last week’. When the reaper comes its simple ‘what did you do’ not ‘what did you get’.