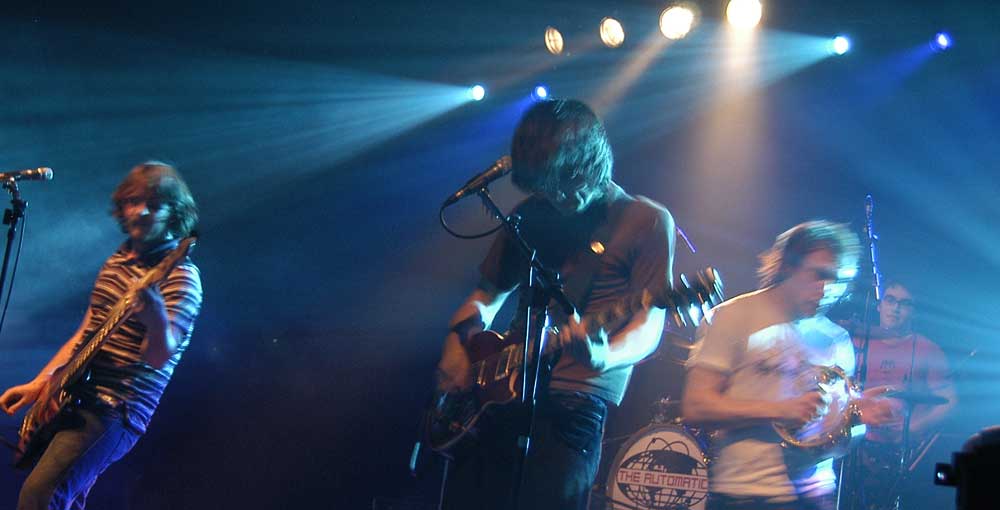 You all met at primary school and formed a band at the age of 12. Have you always had a dream of forming a band and making it big?
I remember being in primary school and making music with Frost before I’d even met Irwin. I played the flute back then and it was a bit weird. We just did it for fun as friends coz we were all quite creative anyway. We used to watch stuff like The Fast Show on television and record comedy sketches as well, so it was like one long creative thing that we did. Over time it became the main one, the dominant one. It became something we did every week, like a relaxation thing. It was also something we just did together and over the years we realised we weren’t mad. Then it started to become serious and we thought we’d take a gap year and work on it. When we got the management deal we thought we have definitely got to take the gap year. Penny joined when we were 16 and we had the synths then as well. It was a much fuller sound which added a new dimension, so it was something that grew over time really.

You must have had some ups and downs in those years, can you give us some examples?
We were just a 3 piece for a long time. For a long time I wasn’t a singer either, it was a role I grew into. So we were always looking for an extra member to sing or somebody to play a second guitar and stuff like that.  So we had quite a few different members, not all of them bad. But some of them just wanted to do something completely different. Coz we always write as a 4 piece, some people wanted to write extra stuff on their own and it didn’t quite work. Another guy was a great guitarist but a metal guitarist and that didn’t really work. So yeah we had a lot of ups and downs that way. The main problem was that we never had any where to practice, or any PA system to sing through so we were quite limited in that respect.

So was it all done in somebody’s garage?
The origins were in my playroom as it was then, bedroom as it is now. With our drummer hitting an inflatable chair.

Where do you think you would have ended up if you had never formed a band?
University because I did alright in school. But that probably wouldn’t have been the best thing to be honest because I had grown pretty simple by the end of A levels and I was pretty sick of education.

Being called ‘The Automatic’ do you all just want to drift through the year and see where you end up? Or will you manually gear a ‘big plan’ for where you want the band to go?
We want to be as big as possible and keep making the music we want without worrying about money. I would like to reach the position where I can keep doing this forever and I’m never going to have to stop.

Are you content with rocking England or can you see yourselves trying to crack America?
America is on the cards, we’ve done our bit in England for now and we don’t want to be over exposed. Were off to Europe at the end of Jan and the states in March and we are gonna do the Warped tour as well.

You went down a storm in Brighton, was that your favourite live permormance?
Yes, apart from it being a really good gig, we played really well and the crowd were really warm. It was boiling hot and we stripped down to our pants at the encore. Then to top it all off we told the crowd we were going to run into the sea, and we were followed by about 100 people which was pretty fantastic. To have the audience follow us was amazing, a sort of baptizing!

You recently filled in for Zane Lowe on Radio 1. How did that come about, did you enjoy it, and has it changed your mind about your career choice?
We were just offered it fairly out of the blue and we were well up for it. We got to choose a lot of our own tracks. The studio had to play a few RnB Radio 1 play lists but mostly it was our choice. It was good to expose some bands that you had never heard of, and show our influences, what we like listening to and where our music is coming from. It was great to be a radio DJ, it was really good fun, I can see myself doing it again. My second cousin is Guy Garvey from Elbow. He’s got a show upon XFM in Manchester and he doe’s that alongside Banks just every so often. It would be really cool to do something like that. Either XFM or Kerrang is going to be moving to Cardiff soon so it would be really cool to do something yeah.

Your cover of Kanye West’s ‘Gold Digger’ was awesome. On the back of that success have you any plans to do more covers?
Yeah, we did ‘Gold Digger’ a lot last year as part of the live set and it was pretty weird playing the flute live. We’ve learned to play ‘Life During War Time’ by ‘Talking Heads’ so we’re going to do that on the next tour hopefully if we can rehearse it and sound check it enough.

Who would win in a gig-off between yourselves, fellow Welsh rockers Super Furry Animals and Charlotte Church?
Charlotte would be wasted and the Furry’s would be stoned so it would be us.

It’d be hard not to mention the success of your hit single ‘Monster’. Do you get tired of people requesting it as you’ve obviously got so much more in the bag to perform?
No I don’t get bored of it at all, I don’t wanna listen to it back but I don’t listen to any of the album back to myself. I prefer it live; I enjoy playing it live still because you can put something new on it every time. You can feed it a different emotion or energy every time you play it and keep it fresh that way. Because you get people yelling the chorus at you or something you’re like “Yeah I no how it goes…Well done”.

Which out of all your tracks is your favourite, and why?
‘By My Side’ because it’s one of the oldest. It’s probably what The Automatic wants to do most in terms of the music. I think I hit the nail on the head with how I was feeling when I wrote it. A lot of it was influenced by where we were recording. We were kinda shut off, there was no phone signal and the internet was down while we were there in Chegway. It’s more about regaining self confidence and stuff like that after a period of insecurity. It’s a very important song to me.

A lot of bands hit the wall with their second album. Have you started work on it yet? Do you have any clues as to what we can expect?
It will be heavier. Hopefully it will be a bit more varied in some respects to the first album. A lot of the first album didn’t have variation in the sound. It was all a very similar speed. So that’s something we want to escape, we want to try a few different ones. Slow it down a bit, not necessarily do a mellow track but a slower track can have a different energy to a fast track. So it would be good to tap into that and see what it does for people.

What is the most ‘Rock and Roll’ thing you’ve all done as a band? Wasn’t there an incident on GMTV?
There was an incident on GMTV and that would qualify as Rock and Roll. But it’s kind of embarrassing, we weren’t boys brought up to do that sort of thing. The fact that we were going on GMTV was sprung on us, we were told it’s not GMTV, it’s something on just after it, some morning programme. We didn’t know what it was and when we got there we found out it was GMTV. The thing is you have to be there at about 6 o’clock in the morning to do it. When you’re on tour you don’t wake up until about 11am normally because you don’t get to sleep until around 3am. So we were going to be a bit jet lagged. Frost decided just to stay up all night instead of going to sleep because there was no point. He did, he stayed up all night drinking so he was pretty wasted by the time we got there in the morning. We didn’t really wanna be there because we thought we had been tricked into it and it wasn’t really our thing. We don’t feel any animosity towards GMTV but I just don’t think we are a band that should have been on it. As soon as Frost’s guitar strap came off half way through the song he just went mental. He started trashing stuff and then he trashed the hired gear that we had got. But it wasn’t as if he damaged anything from GMTV. I think Band Of Brothers was on there as well and he was laughing his head off, he thought it was great.

Who is the craziest band member?
Penny probably, the rest of us are pretty grounded. He likes to be the show man and centre of attention. He often does some crazy things like climbing up scaffolds at gigs and stuff which is quite interesting. I have often wondered “Are you going to die tonight”.

If you could leave one lasting impression on our readers, what would it be?
To write us of as a pop band would be a bad idea, which has happened. We have been marketed as a pop band but if you see us live we are a lot heavier than that. Our direction is going to be a big step away from the norm, which is enough to keep people interested without being ridiculously wanky rubbish. We are a band that means it and we are not a sell out at all.