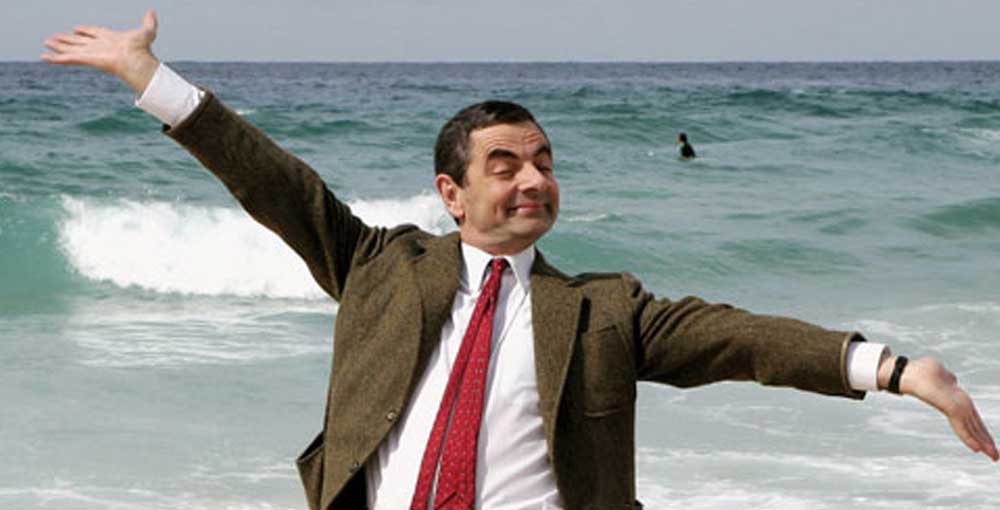 It’s been a decade since the success of the original Mr Bean movie, why has taken quite so long for you to make a sequel?
Well, we certainly never planned a sequel. I mean there was always a ‘demand’. There was always a desire for a sequel that we never satisfied because I couldn’t… I wanted to do something different because by the time we made the movie in 1997 I’d been doing Mr Bean fairly solidly for about eight years and I thought it was about time I did something else.

How many concepts did you go through before you got to the holiday?
It started off with the title Mr and Mrs Bean, the idea of almost a kind of quasi-romantic comedy. But we finally felt it was a bit too cheap and cheerful. We fancied something just a bit simpler but at the same time a slightly more sophisticated idea. Simon McBurney got involved and came with the idea of a road trip through France, and Mr Bean’s dream of a beach in the South of France, with the film following his journey.

What is it about the holiday and road trip that offers more comedy?
France was a good idea because we liked the idea of putting him in a world in which he could not speak the language. Then it means he won’t speak and we like the idea of him not speaking. The idea of France appealed for that reason because we thought there was greater excuse within the bounds of reality to present a visual film rather than a verbal one and, secondly, we liked the sense of an ever changing scenery. Some journeys are always fun because it’s nice to think of yourself on the journey, there is also the possibility of a great variety of situations. You know, you can be stationary, you can be moving, you can be in a plane, on a train, you can be in a car, you can have bicycle, you can be on foot, you can be in the middle of nowhere, you can be in the middle of a city. There’s a huge geographical variety you can get into the narrative and that pays dividends because it means that the film not only has many different locations, and locals, but a variety of situations, and a great number of jokes. That was really what I wanted.

Tell me little bit about the construction of the script. Is it a case of creating physical situations for Mr Bean? How much control do you have when formulating the scenarios?
Quite a lot, I mean I’m not really a writer but I’ve got a fairly clear visual sense when it comes to Mr Bean and the situations in which I think it would be fruitful to put him. That helps to guide all those who are involved with the writing. I act as a kind of guide for the script rather than a writer of the script and I suppose.

How much involvement has writer Richard Curtis had this time round?
To be honest not much. We show him cuts sometimes. It was his idea to get Simon McBurney involved at a very early stage and that was a very good idea because this is roughly Simon’s idea. But apart from that he hasn’t really written any of it. He’s been hovering, I would say, on the outskirts but he’s been hands off with occasional helpful advice.

What are the sheer physical demands of pulling off these scenes over what must be numerous takes?
Well, it’s taxing and, of course, it gets more taxing the older you get. I certainly find it more taxing now than I did ten years ago. It was fine, I mean I was able to do everything. Of course, what I really should do is if I’m going to do bicycling extravaganzas — lots of stunts and silliness — is really get myself more fit than I ever can be bothered to do. I don’t do that sort of Mick Jagger thing spending three months on an electrical trainer before he saunters off on a Stones tour, but that’s really what I should do and can never be bothered to. In that sense it all came as a bit of shock to me. Well, it wasn’t too bad, I was able to do everything I wanted to do but I just found it quite a strain sometimes.

Have you been injured at all?
The only rather amusing injury I got was because at one point I wanted to practise doing a Nazi solute for a particular point so there was an awful lot of (he raises his arm in a swift Nazi salute). I did it with such enthusiasm in the rehearsal room that I ripped my shoulder and gave myself a nasty frozen shoulder for many, many months and it’s only really now recovered. It’s a very unusual problem to have to explain to your osteopath.

How would you describe playing Mr. Bean?
I do enjoy playing him and I find that I know him very well. I find it very easy to play him, and I love his kind of oddity, his strange sort self-servingness. He’s a child, and like as child he has that tension within his personality between the desire to conform and to do what adults expect and the desire to do what the hell you like — somewhere between conforming and non-conforming. And I feel that in me quite often. If there is parallel between me and Bean, that’s it. That sort of tussle within. You know the desire to run down the street with no clothes on and the desire to wear a suit and walk normally.

Do ever get the urge, when playing Mr Bean to speak? Do you not miss the dialogue when you’re making the story?
Sometimes. When playing the character, I don’t miss the dialogue but when it comes to concocting a film, a narrative that’s going to work, it’s very frustrating because one line – say, “lets go to the railway station” You’ve done it whereas suddenly how do you say, “there’s a railway station over there”? It’s always that the visual construction is more laboured in storytelling terms. From the point of view of constructing a film, telling a story only in pictures is very difficult, it’s very time consuming. I mean not only screen time consuming, just shooting a scene which tells a story in a visual way is much more expensive than doing it in a verbal way.

So I enjoyed playing the character but I don’t enjoy filming. I don’t enjoy acting him in films simply because I find the business of making jokes work very stressful and very difficult and very worrying. Particularly when so much of the storytelling is on you as an individual actor and performer. You know you haven’t got a mate in the film, another actor or someone you can talk to. There are other performers and they can sometimes contribute, but in the end I feel the burden of responsibility very much to make the whole thing work and that I don’t find it comfortable at all.

Do you think this is it, have you put Mr Bean to bed?
Probably… but I’m certainly not saying never. Never say never, but at the moment it feels highly unlikely, I cannot envisage a good scenario in which I would play him again, but you never know.

How is it for other cast members? Was it easy for them when you have to  dominate a scene with your crazy antics going on?
I get the impression that sometimes, because is such an eccentric force to work with, a man who’s a sort of law unto himself, that sometimes it is very difficult for them to find a naturalistic or credible way of dealing with such a character. With a performance that is so sort of dominant and so odd… But generally speaking they handled it very well. I mean particularly when you have to push the bounds of reality in terms of what realistically they would tolerate as human beings if someone like that appeared in their path.

Why do people find Mr Bean appealing to watch? In many ways he is someone you would want to avoid if at all possible. Why has he been so successful?
I suppose the two elements in his favour are that a) he’s child and one identifies with his naivety. Not really his vulnerability because I don’t think he is very vulnerable but his sort of naivety, that hint of innocence. That childish side of it is something which people do identify with. And there is b) the fact that people enjoy seeing that sort of that Bean dares to go where we do not dare to go. Through him you can indulge in attitudes and fantasies which our world frowns upon and which forces us all to behave within a certain social norm.

Mr Bean has a natural anarchy within him to be brave enough to break outside that social norm and to just do what he wants. People enjoy watching that. But again that’s just part of being a child, that tension between conforming and that desire to break out. Most the time he’s good-natured, it’s only occasionally I think he’s really quite unpleasant and when he is unpleasant you tend to laugh at him rather than his unpleasantness.