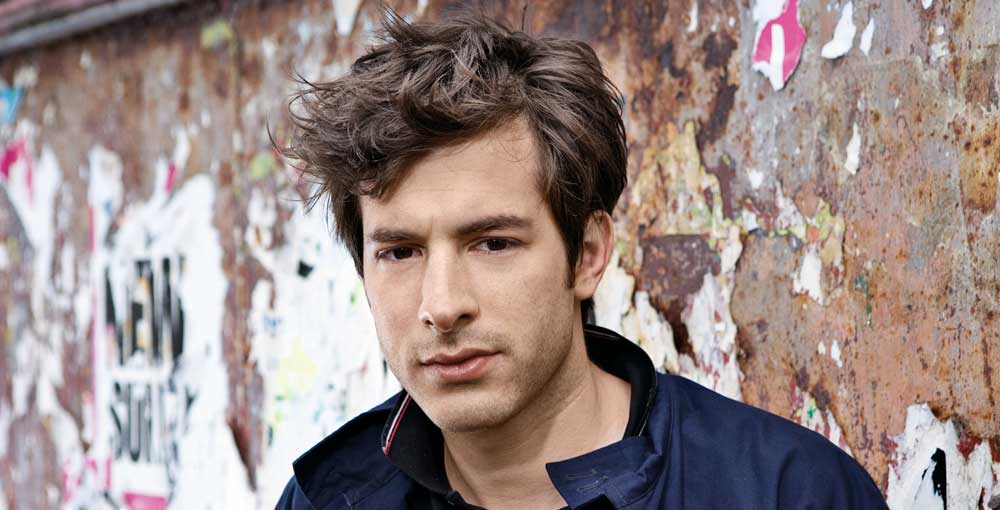 There are not many people in this world that can claim that Music Producer, Artist, DJ and all round legend Mark Ronson called them from LA. We can…

Let’s start from the beginning. What was it like to have Paul McCartney, David Bowie and Mick Jagger at your parent’s house parties whilst you were a kid?
I don’t really remember any of them ever being there. I don’t think they were, everybody thinks I had this incredible child hood. I do remember Robin Williams and Keith Moon but that’s about it.

Oh it’s just like one of those myths that’s just got a bit out of control? We thought these guys might have had an influence on your music?
I don’t think it had any effect on my music whatsoever, I just think it was fun, and I was lucky to grow up in an environment where music was encouraged and my parents were really into music. But it is annoying to see all the stuff in the press about how I must have grown up with celebrities making me breakfast in the morning.

If you were to have the ultimate party, who would you have play?
I would probably have some kind of super group made up of John Bonner on the drums, James Jameson on bass, Steve Cropper on guitar and Stevie Wonder singing.

Is it true you DJ’d at John Travolta’s 50th birthday, that must have been amazing?
Yeah I did, it was alright. It was kind of like playing at any other birthday party for old people, it’s fun, and it is what it is. There were a couple of famous people there but it was just like doing a friends wedding party, it was just kind of normal.

In your own words how would you say your music and style is unique?
I don’t think I can describe music in a word because I think that what I do for my own record, or for Amy (Winehouse), or for Ghostface Killah is quite different. But I definitely have a lot respect for classic 60’s and 70’s, whether its Motown or Led Zeppelin. So I think there is a lot of that that carries over in my music.

Your second album ‘Version’ has given you mainstream chart success. Has it lived up to your own expectations?
Thank you. I didn’t really have any expectations because I didn’t have a deal when I made it and I was just making music that I like so I feel really lucky that it even ended up coming out on a major label. The fact that it has been really successful is really cool and surprising, especially when you make something just because you like it as opposed to something that you think might be a hit so it’s definitely exceeded my expectations at this point.

If I had to pick one, ‘Valerie’ has to be my favourite cover from Version. Which were you happiest with?
I’m kind of sick of all of them. I kind of go through stages in and out of liking them and not liking them. It’s hard to pick a favourite. When I’m DJing I like to play ‘Stop Me’ or when we’re playing live ‘Valerie’ is lots of fun to play so it kind of depends on the day.

How did you come to a decision on which tracks to cover?
I just kind of picked my favourite songs. I had an idea in the back of my head on which tracks might work or not because you can kind of hear it developing in your head. If you’re in an elevator or a shop and you hear a song come on you’re like ‘Yeah that would go well with this’. It’s the DJing part of my brain that knows that stuff and that’s kind of how, I guess, figured out which tracks might or might not work.

Which artist did you enjoy working alongside the most?
I liked working with everybody on the record to be honest. They are all my friends, I’m lucky that I have never worked with any dickheads. I consider Lily (Allen) a close friend and I also consider Amy (Winehouse) a really close friend. Robbie (Williams) is someone I don’t speak to as often but he’s a really good guy. I enjoy working with everybody. I think you get inspired by everybody and each person you get inspired by brings out something different.

What have the responses been like from the artists who you remixed the tracks for?
Well, we had to get permission from everybody, so everybody was into it. Especially to hear people that as a kid you have idolised like Morrissey, say that they like your version of the song or Ed from Radio Head. It’s very humbling at the same time, it makes you think f**k that’s really cool.

Is it fair to say you have played a part in the rise to success of Lily Allen and Amy Winehouse?
I don’t think so, Lilly, when I met her, she already had the demos for Smile and LDN so I’m sure she would have been fine had she have never met me. But I do really enjoy working with her and I am definitely happy to have contributed the littlest things to her album and the stuff we have worked on together for my album.

So what’s next on the agenda for Mark Ronson?
We’re playing a lot more shows this summer; we’re doing a headline tour in October in the UK. I just did a remix for Bob Dylan for his up and coming greatest hits. It’s the first time that he’s ever allowed somebody to remix one of his songs and I did a remix for ‘Most Likely You’ll Go Your Way (And I’ll Go Mine)’ from Blonde on Blonde. He’s approved it so that’s cool. I’m just in the studio working on Daniel Merriweather’s record and I just did a remix of ‘Candy Pain’ ‘One More Chance’ which is her new single, and generally staying busy.

So what has this summer been like for you?
The festivals have been great, Glastonbury was amazing, all the shows have been really cool. I can’t wait to actually get on the road and tour when we have got a normal schedule, because up until now we have been doing every weekend. So it’s hard to build a momentum but the bands incredible and it’s been going really good!

Do you have as much involvement in your videos as you do the music/production side?
Not really, not like Kanye West who’s really into it and really behind it but my videos, yeah, I see the treatment, meet the director and that’s kinda like how it comes out.

I also noticed the video for ‘Stop Me’ was shot in London, and many of the artists you work alongside are British. How much impact does the UK have on your music?
A lot, I grew up there until I was 8. It was definitely somewhere that’s had a huge impact on what I do!

What do you like most about the UK?
The fact that I always feel like I am at home there.