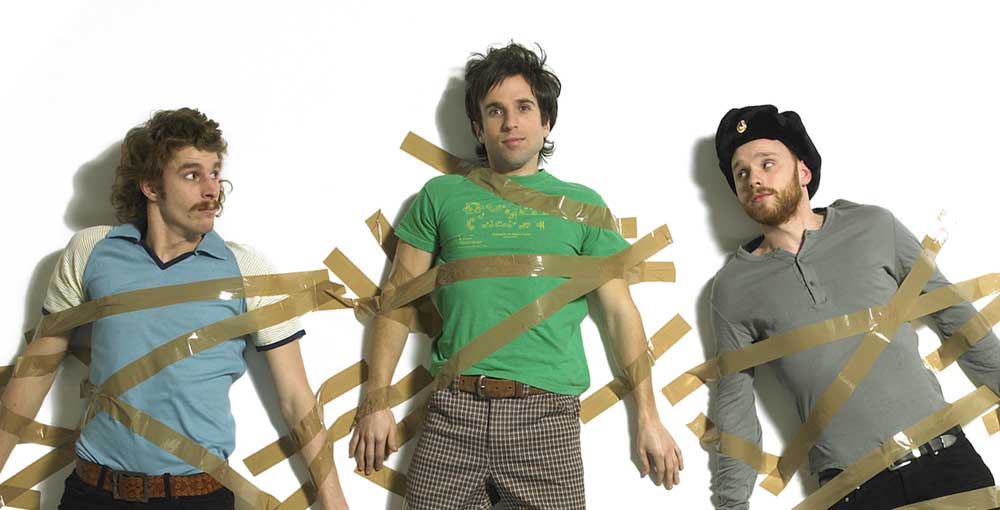 How did you guys all meet?
Al and I were in a covers band would be the easiest way of saying it at school. Two different schools however, but it was at the time when we got offered a tour of Spain. We travelled for about three days with a very dodgy company. They picked us up from Al’s house and demanded £100 each for petrol money as soon as they’d got us away from home. Then we drove for three days, ten minutes away from the venue slammed into a car at 80mph and the whole van turned over on the motorway. The tanks exploded and there was diesel running everywhere with sparks flying so everyone thought we were dead. But it was only the base player who banged his elbow and that was it. He got up and said ‘we’ve got ten minutes, come on we can still make it to the gig’. Me and Al still wanted to do the gig so it was around that time that we realised we wanted to take it a lot more seriously than the rest of the band. Maybe too seriously.

How did you decide on the name?
The Hoosiers? Well just after that we were doing a tour of America. This was following our chemistry teacher who was a drummer in a band. His advice was really like, you cant write about that sort of life unless you’ve lived it a bit. So we took his advice and travelled around and we ended up with a football scholarship in America at Indiana, which is known as the ‘Hoosier State’. So we got it from that, also that no-one else knows what it means so it just means us three.

I bet you get sick of explaining it don’t you?
No, not at all. Each one is different because I just lie every time. So don’t worry, its all fun and games.

Is this football scholarship related to your recent get together with Wayne Rooney?
Well it did kind of help a little actually because we were there and that’s very good, I like your research! We were doing a little hacky sac skills. Personally I think he was intimidated. But that’s only natural.

Did you give him a game of world cup willy?
No we didn’t, just a few tips on his game. And improvements he can make. I think he took it on board.

Obviously Myspace has been quite a good platform, How big a part has this played in launching you guys as a group?
I think it’s one of those things that when labels heard about it, it kind of helped. But I don’t think it’s massive, not as big as it was. So many bands have cashed in on that one. I mean there’s a lot of bands who’ve got a billion friends aren’t going to get anywhere. But I think it does help to know for labels to look at it and go ‘oh you’re on our mailing list’ because we about something like 800 people. So they’re able to see that you’ve actually got the beginning of a fan base. It’s not like starting from scratch. So for that it was useful for labels and for us it was useful to be able to go straight to the punters rather than having to go through a label. Whereas you’re gauging how the public are seeing you, what their perception of you is straight away. It’s really personal, we still do all our myspace stuff anyway because I think it’s really important.

So you handle that side yourselves rather than your Pa doing it for you?
Ha ha, our PA, that’d be nice. One day maybe. But as I say, it’s us three and that’s the way we want to keep it really.

Your first single, ‘Worried about Ray’, why are you so worried? Is it Harry Howson?
Oh no, that was just something completely moved away to something very visual for the video. We had the whole character with the artwork. That’s who Ray was, you can see on the website and on the rear of the cover for the single. We were so into that so I thought it would be healthy for us to just completely forget about it and have a lot of fun for the video. It was actually the director linked to Harry Howson. We’re all big fans of Jason and the Arganauts. It was basically an excuse to tick off a boyhood fantasy of chilling with big Cyclops dinosaurs with an arrow or a drumstick if you will. Who would say no to that?

I definitely wouldn’t. And when hearing your first single being played for the first time, was it on the Jo Whiley show on Radio One?
On Radio One, yes I think it was her. We’ve had it being played on Radio Two, Capital and Virgin before that actually. Before Radio One got involved. For me, hearing it on 2-1-0 or any of the local stations was just immense really. I’ve still only heard it about twice. Whereas everyone else tells me they’re sick to death of hearing it. I’m just glad to cause that strong a reaction. I couldn’t believe it hit top ten.

How did you guys celebrate after getting this amazing chart spot?
Well we haven’t yet actually. But we’re kind of hoping to tonight because we’re going to meet our manager when he comes down to do a tiny sort of practice and then we’re going to go out and grab a bite to eat at Wimpy. Go posh. We’re very aware this is just the beginning, we’re very happy with it but we do want more I suppose.

You played Latitude the other weekend. How was it playing your first festival?
Yeah that was amazing. Just to be there and, when we went off for sound-check there was about 20 people. When we came back on stage in our full regalia there was anywhere between seven and ten thousand people. It was just amazing. We made the most of it because we had a gig in Bristol on the Friday so we didn’t get back from that to London until half five and then we were up at nine to sort out latitude. It was just such a good scene, a good festival. It was sunny and for us it was a career high of a very short career albeit.

I’m sure it’ll be long-lived myself. Are there any crazy rock and roll shenanigans to report or is it undisclosed at this time?
At this one it was probably just the usual. We like to break out the robot in the guilty pleasures tent. But otherwise we were quite safe, because we had a job to do damn it. But seeing Arcade fire was one of the highlights I think. But to let alone share the same stage with them, that was enough.

You were on the same stage and day as Jarvis Cocker is that right?
Yes that’s right. I actually gave him a demo once at a gig where I was flyering. I gave a demo to him and Noel Gallagher. Obviously nothing happened with it because I guess it was a very shit tape but it was very odd to then be on the same stage as him.

You’ve got this pretty manic university tour coming up after the summer, whats the craziest thing you guys did as students all those yeas ago?
I’ve got to think of something you can actually print here… I love it, we could give so many stories here but I’m just going to end up coming out with something really lame like ‘ oh once we got drunk!’ I think we once drunk three whole cups of green tea before reaching the current university record at the London metropolitan uni for helping little old ladies across the road, at Holloway Road. That was pretty fierce. Rock n’ Roll! Yeah absolutely, we’ve given it a whole new identity.

You guys are obviously experienced now at playing in front of large audiences and on TV but how do you, being new to you, prepare mentally before going on stage? Or is this something you build up gradually over time?
It kind of is actually yeah, and I think you know we’re still maybe adapting and still trying to get the best way to do it but definitely its not something that I cant handle it unless I have done silly vocal warm ups and sound like an absolute idiot I think that more stupid you sound the better they are for it.

You don’t do any nervous poos then?
Nervous poos? Oh mate, always. Our base player will leave it like ten seconds, then your on your way to the stage and the musics on and he’s like ‘oh wait a minute, I really need a shit!’ Wiping his arse as he comes out! He’ll be lucky if he’s ever that precise. He might get there for the second song. But generally that’s a pretty good routine to have I think.

Have any groupies come up with any strange requests yet?
We’re actually waiting for the groupies to come up at the minute. But sadly, as we do look like an ugly Millii Vanilli its not really helping things. But no, we’ve been very low on the ground on groupies but hopefully there’s room for improvement.

Well that’s not strictly true, I’ve noticed on your myspace there’s a few hot chicks that have messaged you…
Well, alright, they’re very kind but sadly with them being 12 it’s probably best that I don’t even refer to them.

I read recently that you ate a whole Mr Kipling sponge cake in 20 seconds. Was this for a Guinness world record attempt?
I don’t know if it is, actually I reckon it could be. I’ll have to get it contact with them but I reckon I could break it. So if you’ve got sponge cake I’ve got the time.

I’m sure every man and his dog asks you this but how many times a day do you get mistaken for Ben Stiller?
No but I never get mistaken for him but I really enjoy it when after the gig and someone comes up to you, and there’s always one to ten who goes ‘Oi mate, has anyone ever told you that’, and it’s about that point that you go ‘ OK here we go’.

And is it true Alfonso once got mistaken for a goat?
That is actually a true story. But that doesn’t happen all the time, it was a one off.

I saw a goat up a tree once in Greece. Did you? Yeah, did you think they could climb trees? No I didn’t, but I shall tell him this. I don’t think he’s very good at climbing trees. Perhaps that goat was dressed up. Yeah maybe so, maybe it was half leopard!

Marmite… love it or hate it?
Love it. It’s a staple part of the student diet isn’t it!