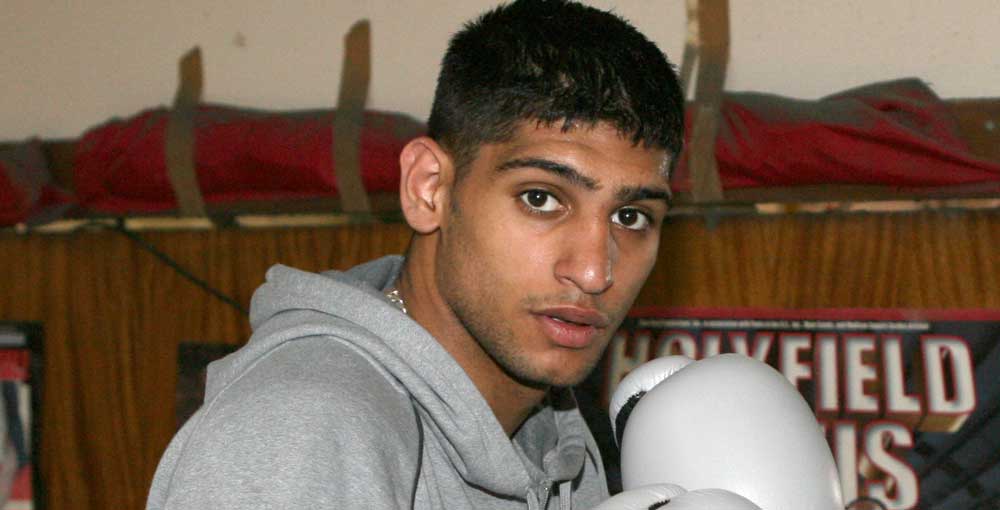 He won the Junior Olympics in 2003, he was Europe’s no.1 light weight at 16 and now he wants to be world champion by the age of 21! Amir Khan steps out of the ring for a few moments to tell us about his past, present & future.

Were you at College during 2003 when you won the Olympic Silver and if so what did you study and how did you fit it in?
Yeah it was mad, I qualified in Sports Development. I wanted to study hard but I couldn’t do it all at once. I was working & doing my assignments but I found it hard. I ended up qualifying in my course and getting my grades though.

How old were you when you started to box?
8 years of age, from there I took it on.

Being a professional boxer at 19 is a great achievement but do you feel that you have missed out on a typical teenager’s life?
Not really because I’ve got lots to come. I’m sure there are lots of people out there who would rather be in my position. I’m a dedicated fighter, I want to be world champion, this is the way I want to be.

You are an inspiration to many people out there. How does it feel to be a role model?
It feels good, all I’m doing is boxing and I’m getting looked up to by a lot of youngsters and older people too. It gives me that push in the sport and makes me do more & try harder.

How do you feel about people saying that you should be fighting tougher opponents?
All the opponents so far have been tough opponents, but I am just one step ahead of them all and I make it look easy.

How would you describe your relationship with your new trainer Oliver Harrison?
Oliver’s a great guy, we’ve got a great relationship. He listens to me, I listen to him. He tells me things, we learn things from each other. I think he’s the only guy who can get me to the world title!

You are often compared to Prince Naseem. If both you and Naseem were in your prime could you take him?
Definitely yeah, I would beat him.

What do you do to wind down in between fights?
Chill with my mates. We go cinemas, paint balling and go-carting. I just live a normal life.

Are you looking forward to Rocky 6?
(Laughs) Yeah, I think it’s going to be wicked.

Who is your hero?
Muhammad Ali.

If you could have 1 round with anyone, fighter or non-fighter, who would it be?
Sugar Ray Leonard’s.

You are very quick with your hands, feet and brain. Do you have a weak spot?
No weak spot at all. That’s the good thing about me. I’m a champion without any weak spots.

You have been offered film contracts, is it true you were offered a music contract by Simon Cowell?
Sort of yeah. He asked me to sing but I can’t sing to save my life so I gave it a miss.