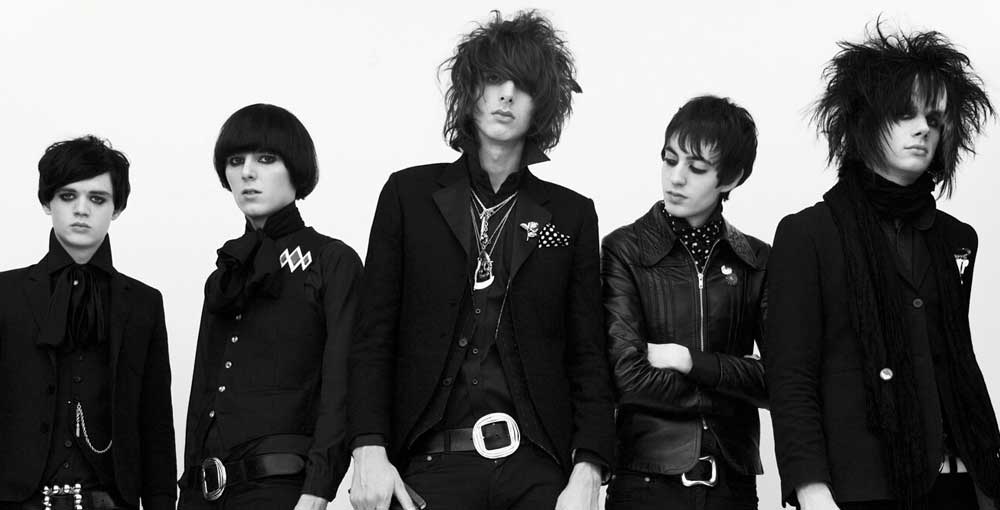 Dubbed the most exciting British band since the Sex Pistols, The Horrors have seen it, done it and played it all in their short-lived careers. Tipped by Jarvis Cocker as the future of British Rock and appearing on the cover of NME after only 2 singles, it’s easy to see why. All the gruesomeness aside, they are 5 very nice chaps…

Hi guys, it’s been a big year for The Horrors with the headlining of the NME festival to name one of your many achievements. How did events like this compare to what you were doing a few months before?
It’s excellent because it’s the first time we’ve done a big show under our names and headline. It’s exciting and refreshing to see the amount of people who are getting into it.  Now the albums out as well so everyone knows the songs which makes it a bit more fun.

This year has seen you have a crack at America, how did people react to you over there?
Very well indeed, people were cutting themselves and tearing there clothes off and generally causing a scene.  We play as big venues over there as we do here, it’s weird.  We played at the Bowie Ballrooms and it sold out.

So which has been your favourite place to play so far?
Iceland was nice,  yeah Iceland when Bjork came and played with us.  I liked that one underground, the miners strike, teas really good down there as well.  LA is good,  it’s great.  I don’t like the place but the crowds are great.

Do you prefer England or America?
England.  I don’t like the American culture, there’s just something strange about Americans.  That’s obviously not the case with all of them,  there’s plenty of really amazing people out there but I guess,  it seems that if you meet someone in America who seems a bit weird,  they’re actually an absolute psycho and unbearable.

Jarvis Cocker has labelled you as the future of British rock, how did this make you feel?
I can’t really comprehend that, it’s such a good complement. Anybody like that who’s said a complement to the band, I find that quite reassuring because it shows you are doing something right.

Are you big Pulp fans?
Not really!  We all really like Jarvis, I’ve just never really got into it, it was a bit before my time really. He did a really good compilation that was full of good music though. People like him.

Your album is called Strange House. How did you come up with that name?
We spent 3 days shouting names at each other and then laughing at how ridiculous they were. We decided on that, but it originally comes from a band called ‘The Attack’ who did a song called ‘Strange House’.  They were a British psychedelic band, it never got released but it’s one of our collective favourite tracks of theirs so it’s quite fitting.

What’s the strangest thing you’ve ever done?
We’ve done lots of strange things; Josh ironed an egg in my house once!

Any reason for that?
I was in a highly jovial mood! I don’t know, I’ve probably done some really strange things but you forget them after a while.

Since you released your album, are people more focused on your music as opposed to your image?
I think the album was a good deciding point. It was finally a statement of intent, a combination of a year’s work so I think it got really well received. The idea of us being a ‘whatever’ band is gone now.  A lot of people probably don’t like it and will probably say the same thing. If people are a bit unsure but they like the album then it’s probably the deciding point.

So what are your plans now you’ve released an album?
Go and do another one! But first we have to tour every corner of the globe. I’ve never travelled before, so it should be quite a fun experience.  We’re going to Europe afterwards and see all the European cities I’ve never seen.  We’re on a bus it’ll be good. When you get there at eight o’clock, get up and walk about a bit and do a sound check at the gig.

On your website you said that on your way back from a gig you had a UFO sighting. Care to elaborate?
Yep, we did. We were driving home from the Vice party, the Vice festival in the middle of nowhere. We got there at 9 o’clock at night and we were playing at 6am so we had 12 hours of just standing in a field in the freezing cold, it was raining as well. When you stay up for that long and you’re that tired you end up tapping into some really weird energy. It’s like a sort of back-up drive, you’re not quite running on full but you’re running on enough. Everything gets a bit primal, you just run on instinct. But it’s really good, you play really well.  It was weird but it ended up being a really great show. On the way back, we were driving down the road and this flying object appeared in the sky. I wish I’d said something but I just looked and pointed in the sky and went “Euhh Euhh!” there was this flashing thing over our heads and then it disappeared. We don’t know what it was, so yeah it must have been a UFO.

Does anything in particular scare you?
Theft is the biggest scare I’ve had recently. On the way back from America we managed to get all our gear back safely, but from the connecting flight up to Liverpool they lost it all, so we had to get stuff shipped in from Australia to replace it. I went white as a sheet; we found it all eventually though. We found it and then someone said ‘actually no, a load of your pedals have gone missing’ but then we found them as well. Yeah that is pretty scary actually. It’s the idea of someone taking your hard work and exploiting it with their sh*t band.

Why do you think you’ve received so much hostility from other bands?
I think it’s because journalists, who don’t like us have cornered them, got them drunk and said “Oi, this band are shit aren’t they?”, and they’ve gone “yeah their a bunch of wa**ers aren’t they!”, “yeah they’re sh*t, you think their sh*t don’t you!” and that’s it. That’s what happens and then they end up regretting it later. When you meet them they go “oh sorry, I was really drunk”.

So who has influenced you musically?
Everyone and anyone who ever made good music. I think we’re more influenced by sound, the way in which you can twist sound around and make it sound interesting. I think as far as bands are concerned in general it’s a very long list but you can hear it in the music. We never sat down and said I want to write a song like this band or one that’s really spontaneous. That’s just a natural sort of spontaneity that seeps through. We never set out to just write a song like ‘You Really Got Me’.  The thing that keeps it really fresh is that if we all wrote a song we’d probably all hear that song differently in our heads. Someone will listen to it and go, ‘this sounds like Big Black’, someone else will go ‘this is a great garage record’. So when we approach it in a completely different manner, that’s what keeps our music interesting.

Who are your top bands at the moment?
How about Grinderman, These New Puritans. If you’re in a band and you go see These New Puritans you’ll want to quit your band shortly after seeing them because you’ll see just how amazing they are. That’s never happened to me before.

Can you give our readers a good piece of advice?
Buy more records. Don’t worry too much about whether the meat is cooked properly. People should eat more raw meat!  Beef should be red inside, it tastes really good. Chicken should be tender.

Thank you guys, very much.