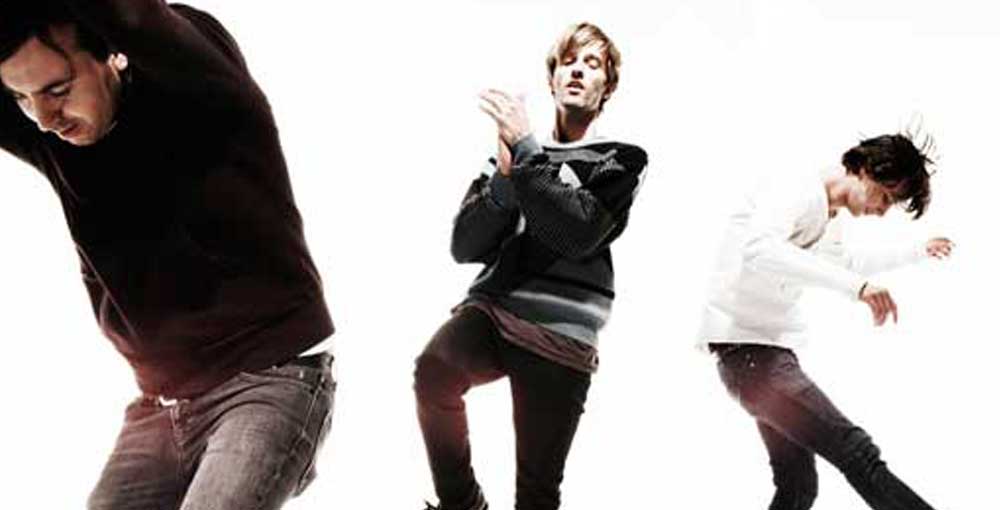 Australian music has been relatively thin on the ground in the UK in recent times. If you’d asked someone to name their favourite Australian pop star, chances are the answer would have been “Kylie”, “Jason”, or even “Pugwall”. But all that is soon to change. Handpicked to open up for Daft Punk, they have taken Down Under by storm and are now ready to take over the world. Get ready to meet Cut Copy…

So you guys have been travelling a lot lately, haven’t you? It must be so exciting taking your sound around the world… Yeah we have been. We were only over here a month ago and since then we have been all over the place. We’ve been to Sweden, Norway before that and we’ve been in Australia doing V Festival. I think the rest of the year we will be in one place or another. It’s really good to get in front of a new audience and get back to places that you may not have been for a while. It’s always exciting to play to fresh new places.

You’ve played a lot of gigs and festivals here in the UK. Is there any particular performance that stands out in your mind? Oh god there has been some great ones here in the UK. We toured around with Milo and there were some great shows there. I know playing up at Barrow Lands in Glasgow with Milo was amazing. We’ve done some quality ones in London as well, there have been loads. All of the festivals and shows we have done here have been good.

What was it like to have the opportunity to play with Daft Punk? Their show is just incredible. A pyramid on stage is not something that you get to see every day!

Do you prefer the festivals or more intimate gigs in small venues? It’s kinda hard because there is good and bad things about both. It’s amazing to get in front of a million people at a festival and just have that immediate reaction from people, who are not necessarily there to see you and reaching out to a different audience. There’s also something amazing about doing your own show where you can have things just how you want them in terms of the production, the sound quality, and having the captive audience there to see the show in its best state possible. So I guess we prefer our own live shows because we can have a bit more quality control on how the show sounds and is presented.

What was it like working with Tim Goldsworthy from DFA Records? It was fantastic; we had a brilliant time working with him. DFA are an incredible label, both the label, and their own production. We really thought he’d have a really good handle on the Disco – the sort of typical DFA sound. It was really cool, and we found out that he actually dropped out of high school to follow around My Bloody Valentine, so he really took to some of the much more guitar driven songs from the record and we were really happy to take it in that direction. So yeah that was awesome, absolutely brilliant.

‘In Ghost Colours’ reached number 1 the week it was released in the Australian charts. What does this mean to you? We were still in the top 10 after a month and that completely blew our minds. When we started the band we didn’t really have stars in our eyes. Yeah it’s always been something we have really been into and we have been really happy with the records that we’ve made but we didn’t think that chart success was something we were destined for. It was a brilliant, nice surprise.

What’s your favourite track from your new album? One of the things I really like about the record is that it is not really a record of singles and hopefully there are only a couple of standout songs, so I really do have a few of them and it changes quite a bit. I quite like ‘Feel the Love’ which is the first one, and ‘Strangers in the Wind’ is another one that I’m really fond of, but I could pick a bunch of them and be really happy with them.

Can you remember the first record you bought? It was ‘Push’ by Bros and I’ll be honest, it’s not really one I still listen to. Do you still have it? I probably do somewhere.

Who has influenced you musically? We really have a lot of musical influences. We try and borrow things from all of the things that we like and then find a way to make it our own. I guess that’s our approach to music so we’re happy to take on board anything. Some of the strong influences have been from the 70’s middle of the road bands like Fleetwood Mac, and E.L.O., and a lot of 90’s guitar music like Sonic Cube and Guided by Voices. There’s really all sorts of things, Daft Punk have been a really big influence. There are sort of a million things and then for this record taking it in a more psychedelic direction with bands like Tangerine Dream, Cam and things like that.

There are so many sounds out there it’s hard to pinpoint Cut Copy with a description. If you had to describe your own sound, how would you? It’s a tough thing to describe and to describe well but one thing I would say is that it was really underpinned by pop music. So that’s what maybe draws together all of the influences that we want to and try to build into the music. It’s really a pop framework with our sort of unavoidable take on it. Once you run it through the Cut Copy process it comes out with this element that is there in the way we work, so it’s pop music.

What songs do you listen to when you’re chilling out? I guess I go back to old favourites like My Bloody Valentine or The Beach Boys.

Dan is also a Graphic Designer – does he design the artwork for you guys? Yeah, Dan has his own graphic design company and he does a lot of the stuff. Do you all sit down and discuss designs or do you leave it to Dan? A bit of both. We try not to interfere too much but we discuss generally what we want it to look like.

What advice do you have for new bands? I don’t know, people ask this and it’s a funny thing because when we started as a band success was pretty far from our mind and it wasn’t something that motivated us. We just wanted to make music we are into and I think the success has come in spite of that. So it depends on what your goals are – I’d say get your goals in order and if you’re doing it purely for your own enjoyment then that’s probably the right way to go about it. But I think if you’re starting up a band just wanting to be successful and make money or something then I’d say you should probably do something else.

Does Cut Copy have a goal? I think our goal is to be able to keep making music which is what we want to do and hopefully get that music to people and at least give people the opportunity to hear it. Then if they like it as well then hopefully that’s a bonus.

How do you think MySpace has helped musicians get their sound all other the world? Obviously this is a great thing but do you feel it’s made the music scene harder to break due to increased competition? I think it’s made it a lot easier. People can get their record out and get noticed without having to spend any money. It’s reduced people’s reliance on record labels to give them the initial push and be able to get any notice. It’s broken down the power structures in a way to be able to get noticed to a large extent. I guess the Arctic Monkeys are a classic example of becoming this massive band before they had record label support thanks mostly to the internet.

Where do you see Cut Copy in 10 years time? I’m not really someone who thinks about the future but maybe in 10 years we’ll be doing the Cut Copy reunion tour or maybe we’ll be releasing our third record, who knows?

Cut Copy return with the release of their second album ‘In Ghost Colours’, which follows their highly acclaimed 2004 debut ‘Bright Like Neon Love’ and is available from all good record stores.