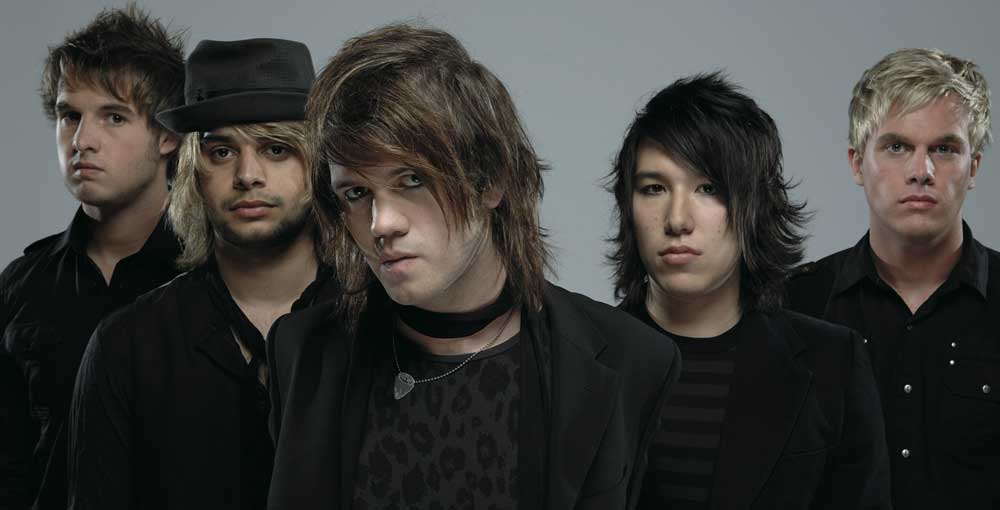 Britain’s best-kept secret (up until now) Elliot Minor are a new breed. Fusing together an eclectic mix of classical music and rock influences, it’s all too easy to see why. With their first four single releases all reaching the Top 40, along with a forthcoming album that’s set to storm the charts, we just know they won’t be kept under wraps for long.

For those that may not know Elliot Minor how would you like to introduce yourselves?
Were a 5 piece rock band and we in corporate a lot of classical music into our music and we’ve been around for 2-3 years.

You used to be called The Academy before Elliot Minor. Why the name change?
We had to change our name because of trademark reasons.

Was this anything to do with the Carling Academies?
Maybe but I think it was mainly the music colleges.

As well as playing the Carling Academies you’ve also played at the Newcastle Arena with McFly. Are there any bands in particular you would like to play with in the future?
Oh yeah – we’d love to play with ‘The Used’ who are on the same label, that would be really cool and I think my dream would be to play with ‘The Muse’.

Elliot Minor have been compared with Muse haven’t they, along with Busted and Fall Out Boy. Although I can see how these similarities are founded, I’d rather pick up on a band’s originality opposed to their similarities. Yeah definitely! On the back of this what makes you unique as a band? I think the songs are very diverse. We hate being pigeon holed into one category of music so we try out new things.

So you guys must be excited to see what the next few months will bring with your tour and debut album soon to be released?
It’s pretty cool, the albums coming out on 14th April. Up until then were a support band for a band called ‘Simple Plan’ who are going around Europe so were going to be joining them on that tour. Then after were going to start our own tour in April which I think will literally be about 8 dates. We have come back now from a little break and we are going to rehearse for both of those tours so it’s pretty hectic but it’s really fun right now.

You have a wide variety of tracks on your self-titled debut album, what’s your favourite?
It’s a track called ‘Broken Minor’ which is quite different compared to a lot of the tracks. It’s very piano based and it’s got a lot of orchestral backing to it. And there’s a guy who played on the Titanic soundtrack called Eric Rigler, who played an instrument called the uilleann pipes which is an Irish instrument playing on that track. That means quite a lot to us.

I noticed your orchestral influences in the album. All-in-all your album is totally different to any other I’ve heard bringing a totally different sound. Would you say it’s the originality of Elliot Minor which is the key to your success so far?
I think so yeah. That and the fact we really worked MySpace ourselves from the beginning. I think people appreciate that rather than getting signed right from the beginning. Maybe it is the classical thing coming through as well but then again that’s not in every song so it’s quite hard to say why.

I noticed you have quite a lot of fans on MySpace. Especially females…So are you all guys in relationships or are you living the rock n roll lifestyle?
Only two of us are in relationships right now.

Who’s the craziest band member?
Ali. When he gets drunk he goes absolutely crazy and gets naked most of the time.

You have been described as Britain’s best kept secret…Can you tell us any other secrets about yourselves?
We live literally 20 minutes away from each other all in villages around York and Ed stays with me because his family live in Japan.

Has anyone got any bad habits which annoy one another?
They only come out when everyone is drunk. Ted has urinated the bed a few times. We’re quite messy, we have got a letter of complaint and the bus driver isn’t too happy and if we want the bus back we have got to be tidier. The letter was quite funny. The opening line was something like “I’m aware of Elliot Minor’s drunken state and bring girls back to the bus”. I thought that was quite funny, it sounded quite rock and roll.

Weren’t you all in an orchestral group together?
We all know each other from school and I guess it was mainly music based. We were just around that environment of chore music and stuff because it was a sort of choir school in York. It wasn’t really a specialist music school it just leaned towards music more.

Have you grown up together?
Yeah, it’s really weird because 4 of us went to the school in York and then we went to secondary school and literally didn’t see each other for about four to five years. Then we met up again when we were 18 and formed the band during our gap year. It was quite weird because I only really know the guys from the early years really so we sort of missed growing up together between the ages of 14 – 18. But we’re getting to know each other properly now we’re all 20 – 21.

Jo Whiley has invited you to Radio One’s Live Lounge, what will you be playing?
I think we’re going to cover Sugar Babes ‘Call The Shots’.

That would be a great achievement making the next Live Lounge Album.
Yeah we’re really going to put a lot of work into it, it’s quite important!

What is your ultimate goal as a band?
We want to build everything up and keep on growing and be around for ages. It’s so much fun standing up playing in front of 10 people, then 100 and so on. The whole process to it is so exciting.

What’s the biggest crowd you have ever played to?
13,000 with McFly and our biggest headlining crowd so far was probably about 1,100 at the Estoria.

Do you get nervous playing to large crowds?
Yeah I do. The shows you don’t get nervous for you just don’t have that feeling for. But at most of the shows we do get nervous; we get that adrenalin rush and it brings the best performance out of us.

What’s the most common phrase you use?
Apparently I say ‘awesome’ and ‘oi oi oi.’

Marmite love it or hate it?
Love it!