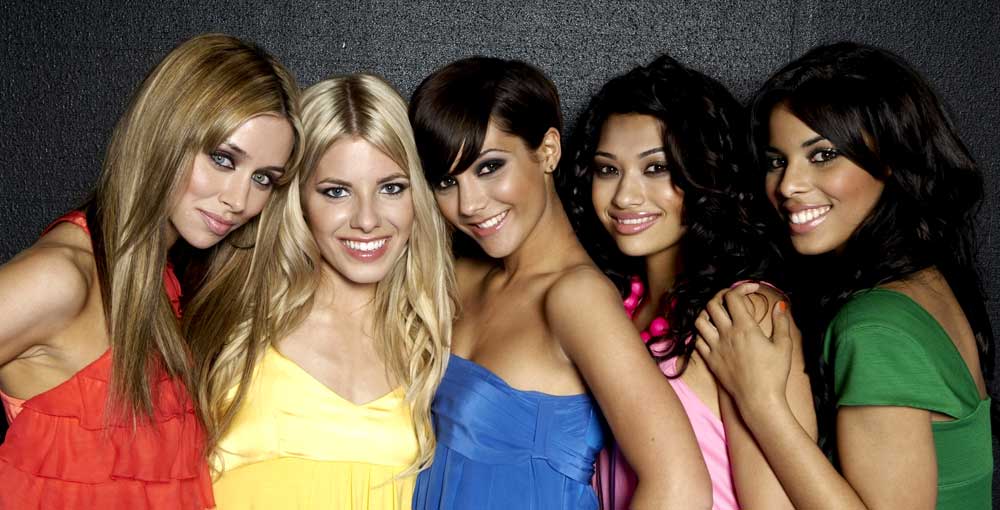 With a gold album under their belt – Up, is exactly where they went. Comic Relief’s Just Can’t Get Enough is true enough of the Great British love affair with them and with a hefty UK tour this summer, work is something The Saturdays are not at all afraid of as Rachelle explains…

How was the band formed, was there a massive audition process?
Yeah there was an audition process. We all had to perfect our singing and dancing. I always say it was a bit like the X-Factor but without the TV show and the judges.

How did you find out that you actually made the band?
They called us in for a meeting and I just thought I was going back because we had been to so many auditions and stuff I just thought it was another part of it. They started telling us all these plans for the band and I was like ‘are we actually in the band?’ They were like yeah you are the band.

The Saturdays are certainly injecting some fun back into the charts. Does the fun aspect of the band reflect your personality?
Yeah definitely all we wanna do is sing pop and have fun.

How has your life changed since becoming a member of The Saturdays?
I’m just so busy at the minute. It’s good though, it’s everything that I wanted to do and more but its chaotic at the minute, a good busy.

What’s it like getting recognised when out and about? Is it strange going through that transition from normality to fame?
That’s the weirdest part I think. You kinda see people staring at you and you don’t understand why until they’re like “Oh are you the girl from The Saturdays?”

What was it like touring with Girls Aloud?
Girls Aloud were so nice to us and they didn’t need to be that nice, they really welcomed us on their tour and made us feel at home.

You are headlining your own tour in June – Can you tell us a bit about it?
We start on tour on June 5th until June 27th. We’re doing a small theatre tour. Were doing Hammersmith Apollo and places like that. We just wanna do somewhere that’s kind of up close and personal. We wanna be really close to the fans for our first tour and put on a good show.

Are you a festival goer yourself?
I’ve never been to one. Frankie’s really into festivals. I was gonna go to V Festival last year but I didn’t wanna camp. I just wanted to go, hang out and listen to people. This year I’m hoping we are going to be able to stay and see other acts perform.

Who would you like to see live?
I really wanna see The Script live.

What are your top 3 tunes on your iPod?
The Scripts new song, I’m a big fan of Music Soulchild (he’s quite oldskool but he’s on at Indigo at the o2 a day after my birthday so I’m gonna go and see him), I also like Shontelle’s track T-Shirt at the minute.

Which if your own tracks is your favourite?
My favourite tack is still Issues. I like Chasing Lights from our album as well.

Yes, I was going to mention your debut album ‘Chasing Lights’. Congratulations for going Platinum! Are you now thinking of a second album?
Yeah were starting to work on it now.

How will this differ from the first?
We’re writing on the second but it’s not like we’re trying to grow up or change our sound. It’s just going to be a progression of the first album.

It’s a massive honour being given the opportunity to sing the official comic relief single. Would you say that the comic relief single has been The Saturday’s greatest achievement to date?
Absolutely, it’s a dream come true for us, we’re absolutely chuffed to bits about the Comic Relief thing and it’s our highest chart position so we are just overwhelmed.

How did this come about?
They called us and asked if we wanted to release the single and we jumped at the chance. Is refreshing that they actually picked a group that’s not actually that established.

You’ve previously mentioned that you are called The Saturdays because “It’s everyone’s favourite day of the week, and it’s always the best night out.” What is your ideal Saturday?
My ideal Sunday? Err… my ideal Sunday is roast dinner with my family, watching EastEnders omnibus, watching DVD’s.

Yeah but what about the Saturday?
My favourite Saturday is to go shopping, get my hair blow dried, and to go out for a meal.

I did read you are a bit of a shopaholic…
Yeah I am. It’s not so good for the bank balance but it makes me feel good.

What would you come back as if you were re-incarnated?
I’d come back as a dog. Why is that? Because everyone loves dogs. Any particular breed? A family dog, a Labrador or something.

If you could be anywhere in the world right now, where would it be and why?
I’d be on a beach somewhere like Dubai. What would you be drinking? Water of course.

Who out of the band is more likely to win The Gladiators?
Una, without a doubt!

What’s the most heroic thing you have ever done?
One day I went to watch a football match with my friend. It was one of those games where everyone was standing at the park and the ball came at her towards her face and I jumped in front of the ball because I’m a good friend and I got hit instead. You took the bullet. I took the bullet and it hurt. Who do you support? Tottenham!