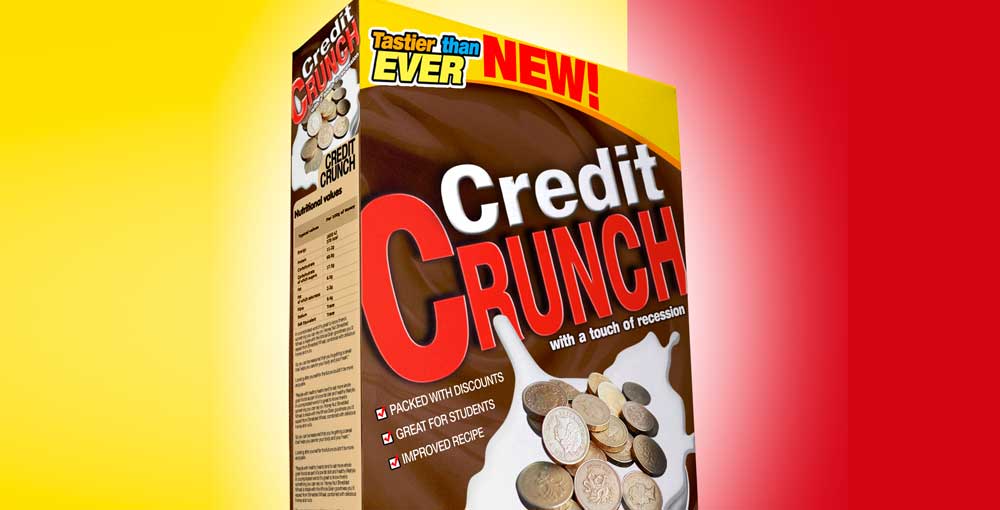 Why we love the Credit Crunch

Just when you thought you couldn’t take any more references to the dreaded credit crunch, even your favourite mag, ‘The Student Pocket Guide’ gets in on the act.  Our eardrums and eyeballs have faced constant credit crunch bombardment 24/7 with doom and gloom stories. Never fear, The Student Pocket Guide is here to take you through some of the reasons to get up on the roof and shout – “I love the credit crunch.” Shouting costs nothing; just for God’s sake don’t break the roof.  There’s no way you’ll afford a new one.

So here we go; 10 reasons why we love the credit crunch:

1. Firstly, what with the financial equivalent to World War III rumbling around us, Kerry Katona and Barrack Obama no longer control the news.

2. ‘Credit crunch’; the best two-worded excuse in history. Even beats that one that only girls can say. “Where is my Christmas present?” Credit crunch. “How come you never called?” Credit crunch.  When chubby Cheryl from the Kings Head asks “What’s your name?” Credit crunch. You get the idea. (NB. “Why didn’t you vote on X-Factor?” Because it’s crap!)

3. Your friends who work full time aren’t quite as loaded anymore. Fact.

4. Whatever you did outside the kebab shop last night, won’t be half as embarrassing as the head of Iceland’s central bank (this is not Kerry Katona), who issued a statement announcing a £4 billion loan from Russia when Moscow hadn’t actually agreed to it.

5. Supermarkets now sell everything. Where else can you acquire an energy saving light bulb, a tartan shirt, the Sunday paper and a tin of cat food in a single visit… with change from a tenner? Also…

8. In order to capitalise on a captive, if somewhat skint audience, TV execs have had to ensure telly is better.  Didn’t they do well; Holly Willoughby is now quite literally fronting at least 36 shows on our telly-boxes. Result!

9. Graham Norton however, £2.5 million a year for finding Nancy! Not anymore.

10. Finally, as a direct result of the dreaded credit crunch, it’s now more likely than ever that we’ll live to 100.  Scientists say that the need for organisation, contentment and more traditional family values will make us all healthier, happier and around for longer. Healthy? Happy? The same might not be said for the head of Iceland’s central bank. Or the face of Iceland.

So there you have it. Maybe this credit crunch malarkey isn’t all that bad after all. Why are you still sitting there? Get up on the roof!