Chase and Status are a Drum n Bass production duo from London consisting of Saul Milton and Will Kennard. Their own releases have made serious headway in the UK dance chart including 3 number ones and the guys are only just getting started. The SPG caught up with Will to find out a bit more.

Where did the names Chase and Status come from? Chase and Status are both individual graffiti names from when me and Saul were younger. We used to run around spraying on walls, getting into trouble, as you do. When we teamed up years later, we couldn’t come up with anything more original so we went with Chase and Status.

How did you both get involved in the Drum n Bass scene? We met up through the Drum n Bass scene and going to raves. We were both very much into bedroom DJing and buying records. We always used to go down to Black Market Records in Soho to buy the latest tunes and go straight home to practice mixing them. 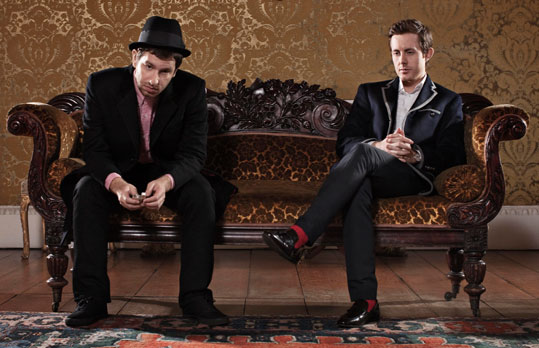 What music or artists have influenced you most growing up? I was a massive fan of Joy Division and then New Order when I was growing up. The electronic sound that New Order had really interested me. I went from that to discovering early hardcore rave and The Prodigy were one of the biggest influences early on. I heard their stuff on a pirate radio station around 1993 and I loved it. I eventually got into the beginnings of Drum n Bass after that, everyone from Shy FX to Grooverider and Goldie. I was also a big Nirvana fan, that’s why I learned how to play the guitar, so a whole bunch of stuff really.

Did either of you go to college or uni? Yeah we both did. We went to the University of Manchester.

You’ve made the move from DJing into production, which do you prefer? We started producing because we realised that was the only way to get any real DJ work. We were often just DJing at any old party for free, taking our decks all over the country DJing to no one, for nothing. We realised that unless you produce and release music you’re never gonna get a chance to DJ to the bigger crowds. Initially it was all about DJing for us but as we got more and more into production something changed. It’s impossible for me to pick between them though. Production is more timeless because you write a song and it’s there forever where as DJing is very instant and then it’s on to the next gig. Production is a little bit more special I guess but the feeling of playing to 20,000 people is unbeatable.

As well as producing tracks you also remix a lot of other artists records, are there any that you are particularly proud of? One that worked out well for us was a remix we did for Plan B a number of years ago, a song he did called ‘No Good’. It stayed quite underground that mix but it became quite a big track. Plan B absolutely loved it and since then we’ve done a lot of great stuff together. The Jay-Z remix we did recently was massive for us as well.  Jay-Z has never had anyone remix his tracks before, so to get asked to do it and for him to give it the nod of approval was really big for us. More recently we’ve been fortunate enough to work with The White Lies and Dizzee Rascal as well so it’s been pretty cool.

Does being in a team of 2 people help or hinder when working with other artists? I think it helps. We’ve been working together for a while now and we’ve got a good understanding. We both produce so it’s double the ideas and double the input. When you’re sitting in a studio all day you can go insane because it’s hard to have any objectivity. It’s hard to know if what you’re doing is any good. I know producers who work on their own and are constantly wrecking their brains, going round in circles and never getting anything finished. To have someone else there to give you that confidence that what you’re creating is on the right tracks is a real benefit. 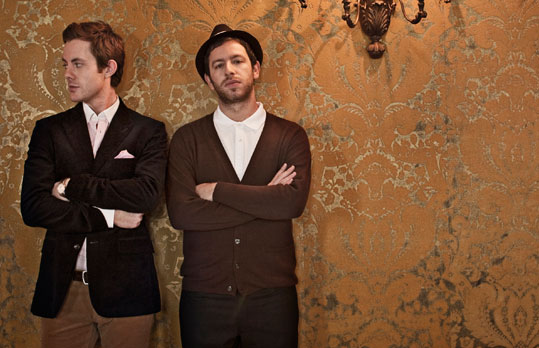 Do you embrace new technology in terms of DJing/producing or stick to what you know best? What we do is quite technological so it’s important to try and stay ahead of the game. We’re massive lovers of vinyl and in the beginning we used to spend all our money cutting dub plates, even though they only lasted a few months. In some respects it’s quite sad to see the demise of vinyl although the Dubstep guys are really bringing it back. Time moves on and technology changes so if it can improve the output and creativity, then we’re all for it.

How big is your record collection and where do you keep it? It’s a nightmare. Both of our record collections are combined now and they’re kept in a storage facility at the studio with the rest scattered between our houses and who knows where else. I’ve probably got about 4,000 records; it’s hard to keep track of them all. I need to get them catalogued as soon as possible really.

Who are your DJ idols? An obvious one is Andy C. He’s been on top of his game for so long now. Seeing him play live in the beginning was mind boggling, it blew me away.  Another one is David Rodigan; he’s a big inspiration. He’s a Reggae DJ who is probably the coolest DJ I have ever seen. He’s an absolute legend and he’s about 45 years old and still killing it. David and Andy are definitely my biggest idols in the DJ world.

What are your top 3 albums outside of the Drum n Bass scene? Probably ‘Songs in the key of life’ by Stevie Wonder, ‘Black on both sides’ by Mos Def, and ‘Substance’ by New Order.

What does success mean to Chase and Status? I think ultimately it’s about writing good music that stands the test of time. It would be great to write albums that keep selling and become well known not just in the present but years down the line. To be remembered for your music is what we strive for, it’s got nothing to do with money or anything like that. We’re very ambitious about where we want to go with our music and what we want to achieve.  If we can achieve half of it we’ll have been very successful.

Which destinations do you enjoy playing most? There’s so many but a stand out gig for me would be playing in St. Petersburg in Russia to 30,000 people earlier this year. Playing in Australia is amazing as well; we have a huge fan base over there.

Finally, what advice would you have for our student readers who want to pursue a career in the music industry? The most important bits of advice I could give is keep persevering no matter what the set back. You have to be completely obsessed and in love with music to get anywhere because it normally takes so long to get noticed. The second thing is networking. It’s really important to meet people face to face and get your music out there. It’s quite disheartening to begin with but once you get your foot in the door you’re laughing.

Thanks for talking to The Student Pocket Guide and good luck for the future.

Cool, no problem, take it easy.