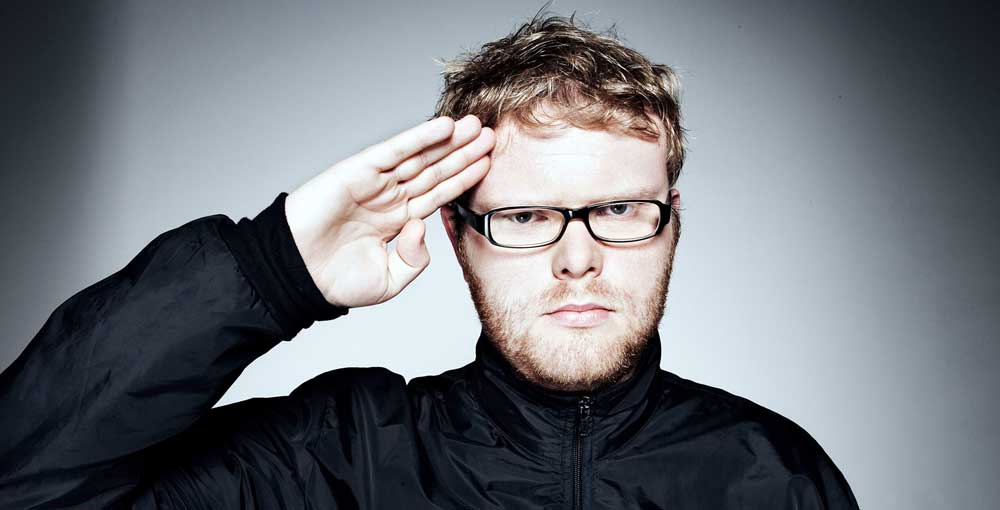 So you’ve just come off the back of hosting the main stage at this year’s Reading Festival. How was it?
It was fun – getting to see the bands before and after their sets is great, and playing tunes before they go on is a great opportunity for a mass sing along. It can be quite nerve wrecking – the worst scenario is forgetting the bands’ name. Hasn’t happened yet, thankfully!

Did you get a chance to sneak off the main stage and see any of the emerging acts on the other stages?
I did. I had to go and see The XX because they’re incredible. I love their album. I saw Everything Everything on the BBC Introducing stage and Not Squares from Belfast who are both great live.

Who stood out for you both in the tents and on the main stage?
Enter Shikari were my main stage highlight. I hadn’t seen them live before, but I have got into their second album. Seeing the crowds and the band feeding off each other was immense. My friend described it as ‘apocalyptical’ which summed it up; the dust, crowd surfing and weird electronic rock was special.

Describe the feeling when you see bands you have championed on your Radio 1 show do so well at festivals like Reading?
It’s great of course. If you’re a fan of a band when they’re starting off, seeing that band take off and move onto bigger things is a great feeling. When a band you love gets on a big stage at a festival, gets its first radio play, that kind of thing is special for the band and the fan.

Which artists would you tip to breakthrough over the next year?
Everything Everything has a bright future I think. They have a different sound, a big shiny happy one at that and really weird lyrics. Ellie Goulding is a phenomenal talent, really lovely voice and isn’t afraid to experiment in the studio too which is good. I’d also tip The XX to win next year’s Mercury Music Prize. If I’m wrong on any of those, don’t blame me.

The BBC Introducing show is responsible for many acts breaking through, most recently The Ting Tings. In a way they kinda owe a small part of their success to you guys. What’s the magic formula for a band to rise from relative obscurity to the main stage at a festival?
There’s not one formula that can guarantee a band’s success. The main things are creative ideas and hard work. The Ting Tings were nominated to play the BBC Introducing stage but before and after that Glasto gig they were gigging hard and have continued to do so. A band with a local fan base and who look after those who come to see them can expect a loyalty in the future. That’s what BBC Introducing is perfect at doing; tapping into local scenes and giving those artists a bigger platform.

Alongside your continued drive to promote new artists on your show, you also have established your own new music festival. How did that come about and what can the punters expect from it?
Swn festival is in its third year now and is a festival based in venues in Cardiff. I’d been to similar festivals around the world and decided Cardiff needed its own one! There are 150 new bands and DJs playing. Really new bands who a lot of people won’t have heard of and some more familiar names like Los Campesinos! and Dananananaykroyd. It’s basically a big party showcasing new music and this year promises to be the best yet.

How did you get your break in radio broadcasting and specifically Radio 1 itself?
I started off doing hospital radio in Cardiff. I was also writing for magazines, managing a band and reviewing records for the radio show. Everything I could basically. Then I met Beth Elfyn who was a producer for BBC Wales at the time and she asked me to do a demo with her for Radio 1 who was looking for new Welsh presenters. It was a case of right place, right time and I couldn’t believe my luck. I do believe you can work hard to be in the right place at the right time though. We started the show and were obsessed with the Welsh music scene. Right now I’m presenting Wednesday nights on Radio 1, and I love it as there’s so much good music about.

Moyles or Mills?
OOOOh, I can’t answer that. They’re both amazing talents.

Vernon Kay or Pete Tong?
Again, too hard to answer.

The Ting Tings or Bombay Bicycle Club?
Ting Tings for fun times in a field, BBC for a stunning album.

Anthem of the festival season?
Bonkers by Dizzie.

One tip for next year band or artist wise?
Ellie Goulding.

Huw Stephens, thank you very much.