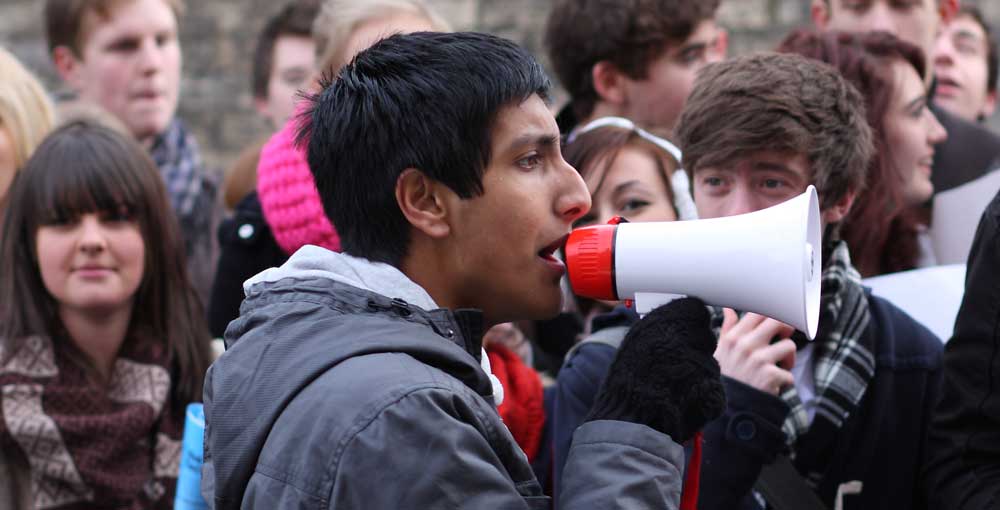 Let us make one thing clear, here at The SPG we fully support the protests which are being undertaken by the vast majority of students. And rightly so; the democracy in which we live is based upon the right to peaceful protest which, if used correctly, serves as a powerful tool that enables any group to justifiably voice their opinion fairly and without fear of recrimination. For those who are currently running around talking of the 1714 Riot Act whilst making the Team America panic signal: firstly stop, secondly Google it and thirdly calm down – it has been repealed for some time. However, I for one believe that non-violent resistance is where we have to draw the line. Think of it like this, if someone in the street didn’t move out of the way on the first time of asking you wouldn’t then instantly attack their shins with the nearest blunt object.

Admittedly that was a slight digression on my part but the sentiment is the same. Violence cannot be the answer and those who believe it a necessity in raising awareness of the issue are entirely misguided. Yes it gains publicity but it is of the negative and counter-productive kind. For many, the concept of student protests now conjures up images of violence rather than the actual cause for dissent.

The whole point of the protests is to demonstrate discontent, with the concept of students being expected to cover the costs of proposed cuts to higher education funding, through the payment of as much as £9,000 per year in tuition fees. And yet this is a point which is becoming passed over more and more by the press in favour of stories covering the violent outbursts occurring in the nation’s cities.

Now obviously it is only fair that everyone be expected to endure similar adjustments as a result of the national spending review, and it is only right that students be no exception. However, the new figures generated for tuition fees will in numerous cases be at least double the current amount – perceived by many to be a disproportionate alteration to the current system. What’s more, the issue is exaggerated by political implications; many students feel betrayed by the coalition government comprising many Liberal Democrats who pledged to oppose such comprehensive changes.

How are we to respond to this then? Well the vast majority of students – pat yourself on the back here if you are one of them – are going about this in entirely the right way. Those peaceful protests being carried out are achieving the first priority, which is to get people on side and so provide the movement with momentum and authority. The facts speak for themselves often enough; in Brighton’s November demonstration around a handful of people were arrested out of the 3,000 protestors. To put that into context, less than 2% of those involved sought to voice their anger in a violent manner.

Unfortunately though, the issue of violence continues to cast a shadow over proceedings. As a result of this the distinction between student protestors and those non-student radicals hijacking many of the protests is now blurred. For the sake of all the movement stands for, the violence must stop. Any further examples of utter idiocy in the form of drug-fuelled Tarzan impressions and the desecration of national landmarks will result in the death of the cause and, far worse, the tainting of freedoms we treasure through the abuse of our  so called ‘liberty’.