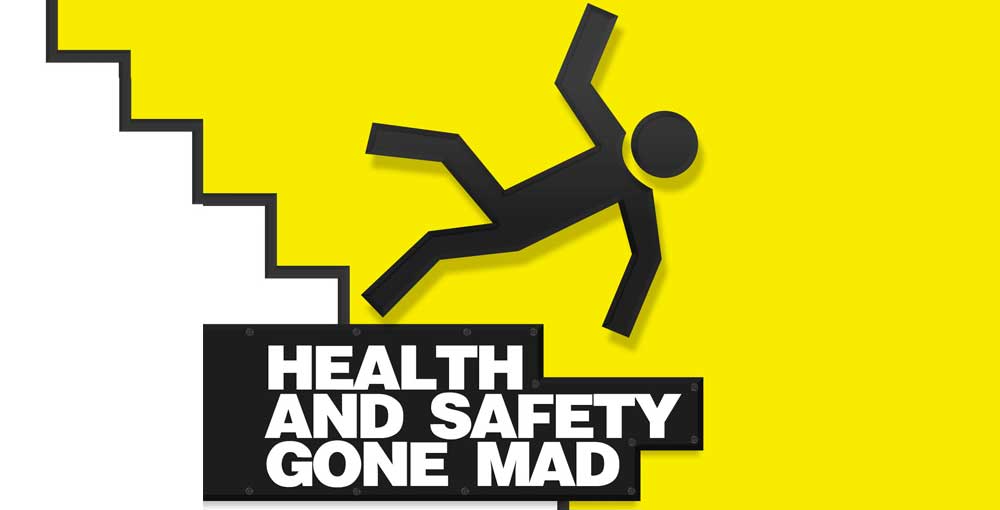 Now, it’s safe to say that health and safety has gone too far in this country. Ridiculous isn’t even a strong enough word to describe some of the bizarre legislation put in place over the last few years, and you really can’t help but wonder who on earth is responsible for passing these obscurities? So blatantly defying any form of common sense or logic, health and safety has left me so confused that I’ve even started wondering if a chocolate teapot would work. Here are just a few examples of excessive and downright inexcusable health and safety bloopers. I mean, honestly…

June 2011 – 85 year old pensioner Charlotte Cubitt from Colchester, Essex, decided to get rid of her old television set which, by all accounts, was far too heavy to move on her own. She contacted her local council who offered an £11 removal service, which a) seemed reasonable, and b) provided the ideal solution. All seemingly straightforward? No. When speaking to poor old Charlotte, a council officer informed her that staff would not be able to enter her home and remove the television set on the grounds of health and safety, and instead, she was told to drag it to the kerbside for collection. Now, let’s think about this. The council offer a removal service, which means people pay to have their possessions removed. Yes?  And not only that, but you would think that the staff employed by the council would be physically suitable for a job such as this? Unbelievable. 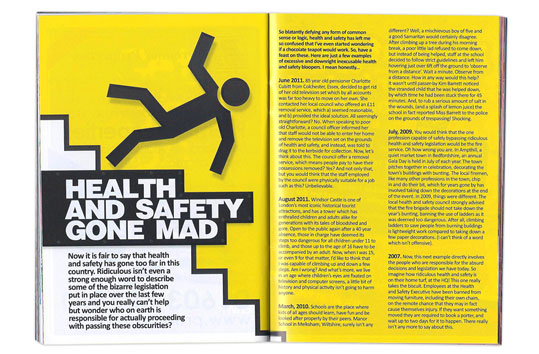 August 2011 – Windsor Castle is one of London’s most iconic historical tourist attractions, and has a tower which has enthralled children and adults alike for generations with its tales of bloodshed and gore. Open to the public again after a 40 year absence, those in charge have deemed its steps too dangerous for all children under 11 to climb, and those up to the age of 16 have to be accompanied by an adult. Now, when I was 15, or even 9 for that matter, I’d like to think that I was capable of climbing up and down a few steps.

March, 2010 – Schools are the place where kids of all ages should learn, have fun and be looked after properly by their peers. Manor School in Melksham, Wiltshire, surely isn’t any different? Well, a mischievous boy of five and a Good Samaritan would certainly disagree. After climbing up a tree during his morning break, a poor little lad refused to come down. But instead of helping, staff at the school decided to follow strict guidelines and left him hovering just over 6ft off the ground to ‘observe from a distance’! Wait a minute… observe from a distance?  How, in any way, would this help? It wasn’t until passer-by Kim Barrett noticed the stranded child that he was helped down, who by which time, had been stuck there for 45 minutes. And, to rub a serious amount of salt in the wounds, (and a splash of lemon juice) the school in fact reported Miss Barrett to the police on the grounds of trespassing! Shocking.

July, 2009 – You would think that the one profession capable of safely bypassing ridiculous health and safety legislation would be the fire service. Oh how wrong you are!  In Ampthill, a quiet market town in Bedfordshire, an annual Gala Day is held in July of each year. The town pitches together in celebration, decorating the town’s buildings with bunting. The local firemen, like many other professions in the town, chip in and do their bit which for years gone by has involved taking down the decorations at the end of the event. In 2009, things were different. The local health and safety council strongly advised that the fire brigade should not take down the year’s bunting, banning the use of ladders as it was deemed too dangerous. After all, climbing ladders to save people from burning buildings is lightweight work compared to taking down a few paper decorations.

2007 – Now, this next example directly involves the people who are responsible for the absurd decisions and legislation we have today. So imagine how ridiculous health and safety is on their home turf, at HSE HQ! This one really takes the biscuit. Employees at the Health and Safety Executive have been banned from moving furniture, including their own chairs, on the remote chance that they may cause themselves injury. If they want something moved, they are required to book a porter and wait up to two days for it to happen! There really isn’t any more to say about this.