With the current nature of chart music, you could be forgiven if you thought that the days were numbered for the ‘Auld Guard’ of rock music. Lostprophets are a band, however, who are fighting aginst the odds and continuing to produce music void of the modern day trends and influences. Having stormed back into the UK charts with their top ten album, ‘Weapons’, the Welsh boys plus one Englishman, Luke Johnson, are back in the big time and set to unleash another set of anthemic records which symbolise all that they are about. We caught up with drummer, Luke, whilst on their UK tour, who spoke of what we can expect from their new album and how an uphill battle will never defeat them.

Hey Luke, how’s it going?
Yeah really good thanks, the tours been wicked, a lot of sold out shows. We had a good time at our hometown show in Cardiff. We had a lot of people turn up there; some nice ladies at the front screaming and stuff! We played the whole of ‘Start Something’ which is the first time we’ve ever done that which was really well received. On the whole it’s been a really good tour.

What do you make of the new boys, Modestep?
Good! They are definitely the right type of saccharin support band. I’ve obviously watched them a few times now. They’re sonic boom bass layers really do get the vibe going you know, so it’s been wicked having them on the road with us.

You’re the newest member of Lostprophets. Can you tell us a little about your journey into the band?
Yeah, my previous band split up in the winter of 2008. We played at Summer Sonic in Japan on the same stage as Lostprophets the summer before so I sort of knew the boys a little bit, but not very well. It was announced shortly after the show that the drummer at the time was leaving. I wasn’t in a band by that point so I thought, you know what, I’ll reach out and see what the vibe is. They were working with John Feldmann at the time, who I’ve recorded with numerous times so I asked him for contact details and got in touch with the band. A couple of months went by as they were making a record so I hopped on a plane to Los Angeles to stay with a friend and waited it out. I got my chance, did a couple of auditions, and it’s fast forwarded to now really! We just seemed to bond really well, those guys are from a similar background to me and we just seemed to click, which really locked us together. I feel really comfortable in the band, we’re all on the same page and there’s a real good team spirit, like a band of brothers. It was an instantaneous click between us all.

Have you learnt any Welsh, being the only non-Welshman?!
Yeah, there’s definitely some expressions that come out every now and then, you know what I mean!? One of the secret ones we have is, ‘I’ll be there in a minute’. Haha. 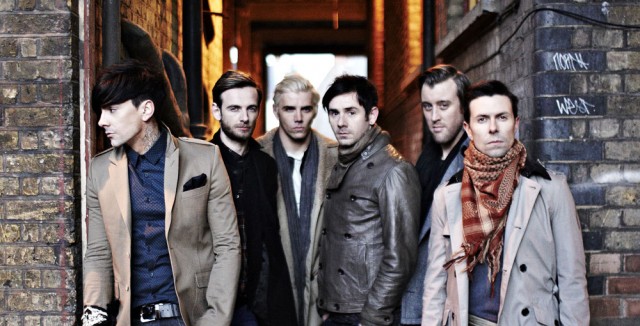 Your new single, ‘We bring an Arsenal’, has been tipped by many for success. What’s the story behind the record?
Yeah, it’s basically a rally song. It’s a very big, chant chorus kind of song. Already it’s been pushed on the radio and there’s been a lot of hype surrounding the song. When we play it, it’s like being in a football ground but at a show, you know? We count it in and kids already know what they’re doing, they just sing it. We used to get really excited about fans singing ‘Rooftops’, or ‘Where We Belong’, but I think this song could potentially take the new crown as the loudest sing-along we’ve got. I definitely think it will have its place on the football terraces as well!

Did you feel there was any pressure on you emulating the anthems like ‘Last Train Home’, ‘Burn Burn’, ‘Rooftops’ of previous records?
There’s always pressure when you’re making a record. Whatever your highest point was previously, you will always try and top that and out-do your previous best, you know? There’s always that pressure in the studio when you feel like, “Are we going to smash these singles?” or “Is this going to be better than the last record?”; there’s always that wonder in the back of your mind. I also think it’s a good fuel to push you through an album process and inspire you. There’s a lot of anthemic songs on this record; we’ve definitely got the ‘Lostprophets anthem’ feel nailed. I’d actually say there are fewer harder songs on this record which wasn’t really apparent to anyone until we started playing them live!

You guys had a harder time of it with your previous record, ‘The Betrayed’. It was quite a long-drawn process with dropping songs and starting over. Is it nice to have turned a leaf?
I came in on the tail end of that process and realistically the boys had a real hard time with it. They had already recorded it once and I can imagine it being quite devastating getting to the end of that process and thinking, “This isn’t f@cking good enough”. There must have been an element of doom about it all but they carried it forward. Stuart [bassist] produced the record and honestly, I think the record smashes heads! It has a load of banging tunes on it. ‘Where We Belong’, is definitely one of the stand outs and every time we play tunes off the record, they get taken in by the crowd as do the other catalogue tunes that Lost Prophets have. I think it will stand the test of time. In terms of that record, and this record, how hard making ‘The Betrayed’ was made this record making process seem easier. 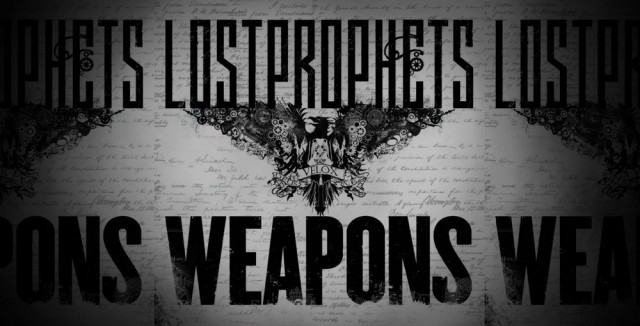 With the new album, ‘Weapons’, you recorded a demo in Norfolk am I right?
Yeah we had a writing session for a month in Norfolk, in a small village called Dersingham. We had a house and set up all our gear in the living room and just jammed out for a month!

Did you manage to hide away?!
Well, for two days we were hiding away! Then word got out in the village that we were there, so 30 to 50 kids were outside every day, standing at the bottom of the garden chanting, ‘Lostprophets, come out!’ At first it was disruptive to the writing process, the doorbell kept ringing so we had to get rid of that; stones being thrown at the window, banging on the windows; our cover was well and truly blown! After a while we embraced it. We used to sneak out round the back gate and jump out of the bushes and freak the kids out! We went out quite a lot though – had photos with the fans and hung out, so it was cool.

Then you were off to LA to record it – quite a change in scenery!
Yeah! Most of the band live there but also with studios in LA you get more for your bucks, so it is a central point of operations for most of the band. We have a cool studio called NRG, in Burbank and we work with a really good producer out there called, Ken Andrews. It was a smooth process!

You guys have obviously played all over the world. Is there one country or venue that has a special place in LP’s heart?
It’s funny you ask that! Last night we played at Nottingham Rock City and that has always taken me back. It’s one of the venues in the UK that has been around the longest, alongside Manchester Apollo, Glasgow Academy, Brixton; all of those sort of old venues. We always sell it out; it’s smaller venue but the shows there are just incredible. The crowd is so close to you on stage, it’s really intimate and a bit of a sweat-box! We came off stage last night high as kites, it was brilliant. So I do love Nottingham for that but in the scheme of the world map, going to Australia is always killer! You get to have a nice little surf trip and hang-out in the sun. There’s not really anywhere in the world I don’t look forward to playing to be honest! We’re a band that is really privileged to have such a fantastic fan base. I almost feel sorry for bands that they don’t experience what we do. We have fans in Latvia and Russia who made a huge video which went online with our lyrics written down on loads of pieces of paper, asking for us to come back there. When I see things like that I get a lump in my throat.

What’s lined up for 2012?
We are non-stop. We finish touring in the next few days then we are off to shoot the video for ‘We bring an Arsenal’ on our next day off. We’re then heading straight into Europe for a headline tour, then back to the States for a couple of weeks off, then back to Europe for festivals, a Vans Warped Tour, Japan, Australia and I imagine we’ll be back in UK towards the end of the year. It’s nuts!

One final question. Do you think times are harder now, more than ever, for rock bands and rock music?
Absolutely. Absolutely. There’s really only live these days – that’s only where it counts. It’s cool if you’re Adele and selling 27 million records, you’ve struck a chord with people. But it is increasingly harder to sell records and it’s increasingly harder to crack the British top ten if you’re a rock act. Our album was number nine in the charts; that’s our fifth top ten which is fantastic but you look at the top 30 or 40 that week, and there will be nothing else that is rock or even guitar music. We’re definitely up against it as a rock band, but we’ll always continue to fight, always continue to do what we believe in and like I said before, we’re a band of brothers. I don’t think any of us really know anything else than being in this band and doing it, so we’ll always be here, punching through the obstacles that are put in our way.