In 2010, Devlin burst his way onto the mainstream bringing with him the underground roots and unique delivery which first brought about his recognition. His debut album that year featuring collaborations with Yasmin, Emeli Sandé and Labrinth received gold certification, and now two years on, he is back for more. The second album ‘A Moving Picture’, will be released this October, and after the immediate success of first single, ‘(All Along The) Watch Tower’ ft. Ed Sheeran, Devlin is sure to be in for more of the same. We caught up with him to hear his side of things whilst also discovering what his worst chat-up line is! 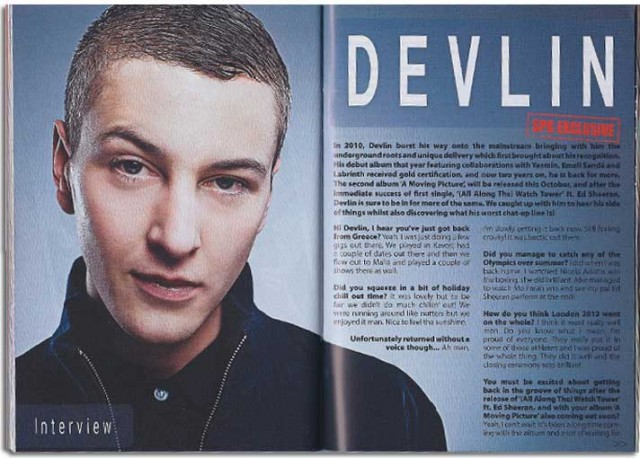 Hi Devlin, I hear you’ve just got back from Greece?
Yeah, I was just doing a few gigs out there. We played in Kavos; had a couple of dates out there and then we flew out to Malia and played a couple of shows there as well.

Did you squeeze in a bit of holiday chill out time?
It was lovely but to be fair we didn’t do much chillin’ out! We were running around like nutters but we enjoyed it man. Nice to feel the sunshine.

Unfortunately returned without a voice though… Ah man, I’m slowly getting it back now. Still feeling croaky! It was hectic out there.

Did you manage to catch any of the Olympics over summer?
I did when I was back home. I watched Nicola Adams win the boxing, she did brilliant. Also managed to watch Mo Farah win and see my pal Ed Sheeran perform at the end!

How do you think London 2012 went on the whole?
I think it went really well man. Do you know what I mean, I’m proud of everyone. They really put it in some of those athletes and I was proud of the whole thing. They did it well and the closing ceremony was brilliant.

You must be excited about getting back in the groove of things after the release of ‘(All Along The) Watch Tower’ ft. Ed Sheeran, and with your album ‘A Moving Picture’ also coming out soon?
I can’t wait. It’s been a long time coming with the album and a lot of waiting for things to fall into place behind the scenes. But, now we’re ready. I’ve got another single coming out after this one and then the album’s out. I can’t wait man! Just to be back in the charts, competing and selling records is nice.

How did the single come about with Ed?
I met him on Example’s tour about two or three years ago; we were both supporting him. We just really clicked man. I admire his talent and he’s just a nice fella.

Has he taught you anything on guitar?
Haha nah. I take my hat off to anyone who can play guitar, it’s so intricate. My hands are too big and clumsy I think! 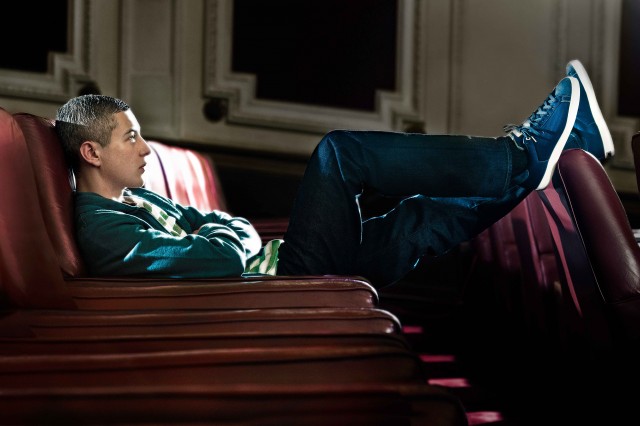 I really like the short movie approach with the ‘(All Along The) Watchtower’ music video. Is that cinematic feel going to be an ongoing theme with your future releases and videos? Yeah, definitely man. It was the treatment which came through that made it. The director Corin Hardy had loads of ideas about shooting it as a short film. I was elated about it and yeah, we’ve set the bar now so I think I better come up with some good videos!

You had a great acting line-up in that video as well, Neil Maskell (Football Factory) being one. Yeah we had Jaime Winstone (Kidulthood), Tilly Vosburgh (Eastenders) and George Russo (Turnout) as well. All of them just made it so much easier. It put me at ease, you know?

Did you feel a little pressure acting in front of them?
I was nervous mate! I turned up and there’s a room full of 20 people who you don’t really even see. They just turn it on like nothing matters! I’ve got a new found respect for actors as well. So yeah, it was difficult, but I enjoyed it.

What can we expect from the rest of your album?
Just me. I’m trying to keep as close to Devlin as I can. I feel we’ve grown, the music’s grown; I’ve lived two years of life in the mainstream now so I feel like I’ve improved and am just a bit further down the line now. I’ve got a bit more to talk about and a bit more freedom. You can expect me. If you’re a fan of me, then you won’t  be surprised.

Obviously with your debut being such a success, do you think it’s added a bit more pressure and expectation on your shoulders?
Definitely bruv. You couldn’t have said it any better! It’s been a long while and the second album can be a jinx for a lot of people. But now I’m glad; Watchtower has been circulating well. Of course, there is pressure, but hopefully we can go gold again or even better.

Did you get the chance to have a break and get away from it all in-between making the two records?
I did. I got to spend time with friends and family but really I’ve just been writing behind the scenes man. I’ve written so many songs but obviously only 13, 14 got used for the album in the end. We just tried to give ourselves as many options as we could.

You have a UK mini-tour in November. Are you playing any venues you haven’t before?
I think I’ve been everywhere before but it’s just nice to get back out there and do my own gigs. I’ve been doing festivals and other gigs, but just to do shows for you, knowing all your fans are there is something I’ve missed. It will be good to get back out there to my fans and give them some new music. 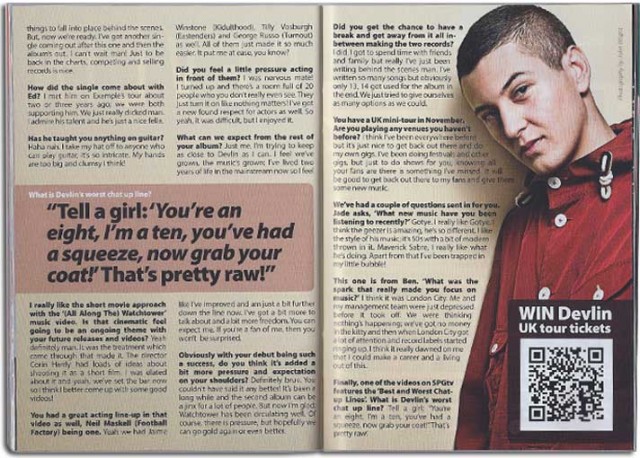 We’ve had a couple of questions sent in for you. Jade asks, ‘What new music have you been listening to recently?’
Gotye. I really like Gotye. I think the geezer is amazing, he’s so different. I like the style of his music; it’s 50s with a bit of modern thrown in it. Maverick Sabre, I really like what he’s doing. Apart from that I’ve been trapped in my little bubble!

This one is from Ben. ‘What was the spark that really made you focus on music?’
I think it was London City. Me and my management team were just depressed before it took off. We were thinking nothing’s happening; we’ve got no money in the kitty and then when London City got a lot of attention and record labels started ringing up, I think it really dawned on me that I could make a career and a living out of this.

Finally, one of the videos on SPGtv features the ‘Best and Worst Chat-up Lines’. What is Devlin’s worst chat up line?