For many of you reading this, you will have just embarked on a whole new chapter in your life. A ‘first’ so to speak. It may well be that you have moved away from home for the first time, just started out at university or turned over a new leaf from lazy layabout to proactive hard working student. Each and every day, people are making ‘firsts’ and our history is laden by these achievements. Here to coincide with and motivate you on your new journey, we have grouped together a series of all things ‘firsts’. A celebration so to speak of the major achievements and landmarks of the human race! Who knows what first you will become…

Billionaire
Money is so often the pinnacle of how the success of a business or person is evaluated. And most I am sure have been left day dreaming about being inundated with wealth. But who was the world’s first billionaire? The answer. It was in fact, American industrialist John D. Rockefeller, whose net worth officially surpassed $1 billion on September 29th 1916. Yes, 1916! That roughly translates into around $200 billion today.

Miss Universe
Starting in Long Beach, California, by Catalina Swimwear as a bathing suit competition, Miss Universe is now the largest beauty pageant in the world. On June 29th 1952, 29 beauties from across the globe showcased their talents to the viewing public, with Finnish beauty Armi Kuusela being crowned the eventual winner. She became an instant pin-up girl and even starred as herself in Finnish movie ‘Maailman kaunein tyttö’ (World’s most beautiful girl). I imagine the attire compared to today’s pageant slightly differs, wouldn’t you agree? 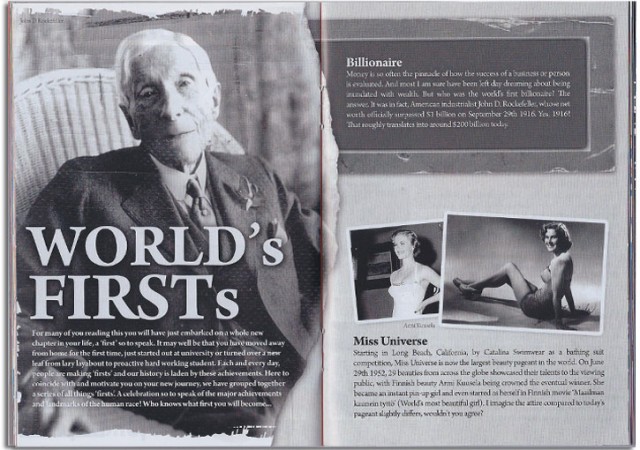 Black Professional Footballer
Long before the time of Viv Anderson, the first black footballer to represent England’s national team, Arthur Wharton made history by becoming the world’s first black professional player. Born in 1865 in Accra, now the capital of Ghana, Wharton moved to the North East of England at age 19 where he trained as a Methodist Minister. His sporting talents however were soon recognised at Darlington FC, which saw him sign for the prestigious Newcastle and District team in 1885. Like other great goalkeepers past and present, he quickly gained a reputation for being eccentric. Think of him as an old school René Higuita! (Scorpion save against England).

Female Space Tourist
When considering all the firsts in the world you could well get your mind stuck in a bit of a time warp. With Anousheh Ansari, however, you need not look any further back than 2006. On September 18th that year, Ansari became the first female ‘space tourist’ for her ride on the Russian Soyuz TMA-9 capsule which took her to the International Space Station. She was also attributed to being the first Iranian and the first Muslim woman in space. How you ask? She paid a small fee of around $20 million. Pennies.

Coca Cola
Coca Cola is arguably the most recognisable universal brand. It’s dominance across the global markets have accredited the company’s value at just under $75 billion. But where did it all start? Coca Cola was in fact originally created as a tonic by pharmacist John Stith Pemberton in 1886, with the very first can being sold in Atlanta on May 8th that year. Just one year later, the recipe was bought by Asa Candler for $2,330, a small fortune at the time. Coca Cola has since dominated the soft drinks industry through three different centuries. Next time you coddle over a can, give thanks to good ole Mr Pemberton!