The Power of Social Media

January 17th 2001. The Philippine President, Joseph Estrada, is on trial for impeachment with loyalists in the Philippine Congress having just agreed to dismiss certain evidence against him…

Within two hours after the controversial decision was announced, thousands of angry Filipinos congregated on Epifanio de los Santos Avenue, a major crossroads in Manila. The protest was organised through the rapid spread of forwarded text messages simply reading, “Go 2 ESDA. Wear blk”. In the few days that followed over one million people had arrived and by January 20th, Estrada’s fate was sealed, marking the first time that social media had helped to overthrow a national leader. Estrada himself blamed “the text-messaging generation”. He had a point. Over seven million text messages were sent that week. 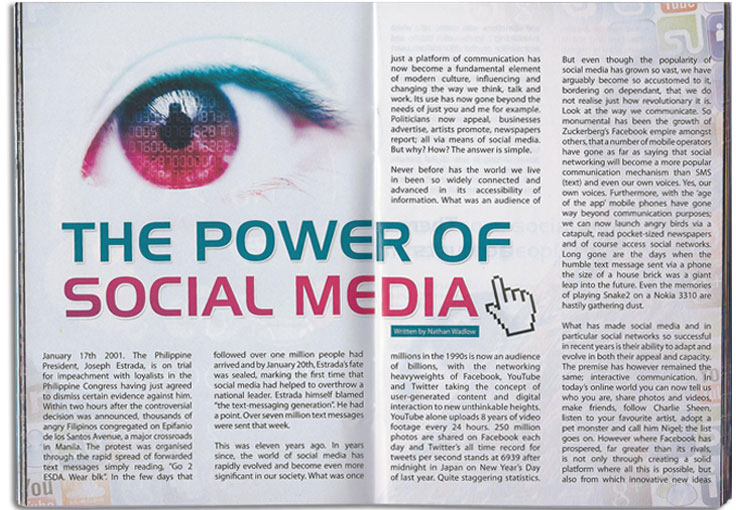 This was eleven years ago. In years since, the world of social media has rapidly evolved and become even more significant in our society. What was once just a platform of communication has now become a fundamental element of modern culture, influencing and changing the way we think, talk and work. Its use has now gone beyond the needs of just you and me for example. Politicians now appeal, businesses advertise, artists promote, newspapers report; all via means of social media. But why? How?
The answer is simple.

Never before has the world we live in been so widely connected and advanced in its accessibility of information. What was an audience of millions in the 1990s is now an audience of billions, with the networking heavyweights of Facebook, YouTube and Twitter taking the concept of user-generated content and digital interaction to new unthinkable heights. YouTube alone uploads 8 years of video footage every 24 hours. 250 million photos are shared on Facebook each day and Twitter’s all time record for tweets per second stands at 6939 after midnight in Japan on New Year’s Day of last year. Quite staggering statistics.

But even though the popularity of social media has grown so vast, we have arguably become so accustomed to it, bordering on dependant, that we do not realise just how revolutionary it is. Look at the way we communicate. So monumental has been the growth of Zuckerberg’s Facebook empire amongst others, that a number of mobile operators have gone as far as saying that social networking will become a more popular communication mechanism than SMS (text) and even our own voices. Yes, our own voices. Furthermore, with the ‘age of the app’ mobile phones have gone way beyond communication purposes; we can now launch angry birds via a catapult, read pocket-sized newspapers and of course access social networks. Long gone are the days when the humble text message sent via a phone the size of a house brick was a giant leap into the future. Even the memories of playing Snake2 on a Nokia 3310 are hastily gathering dust. 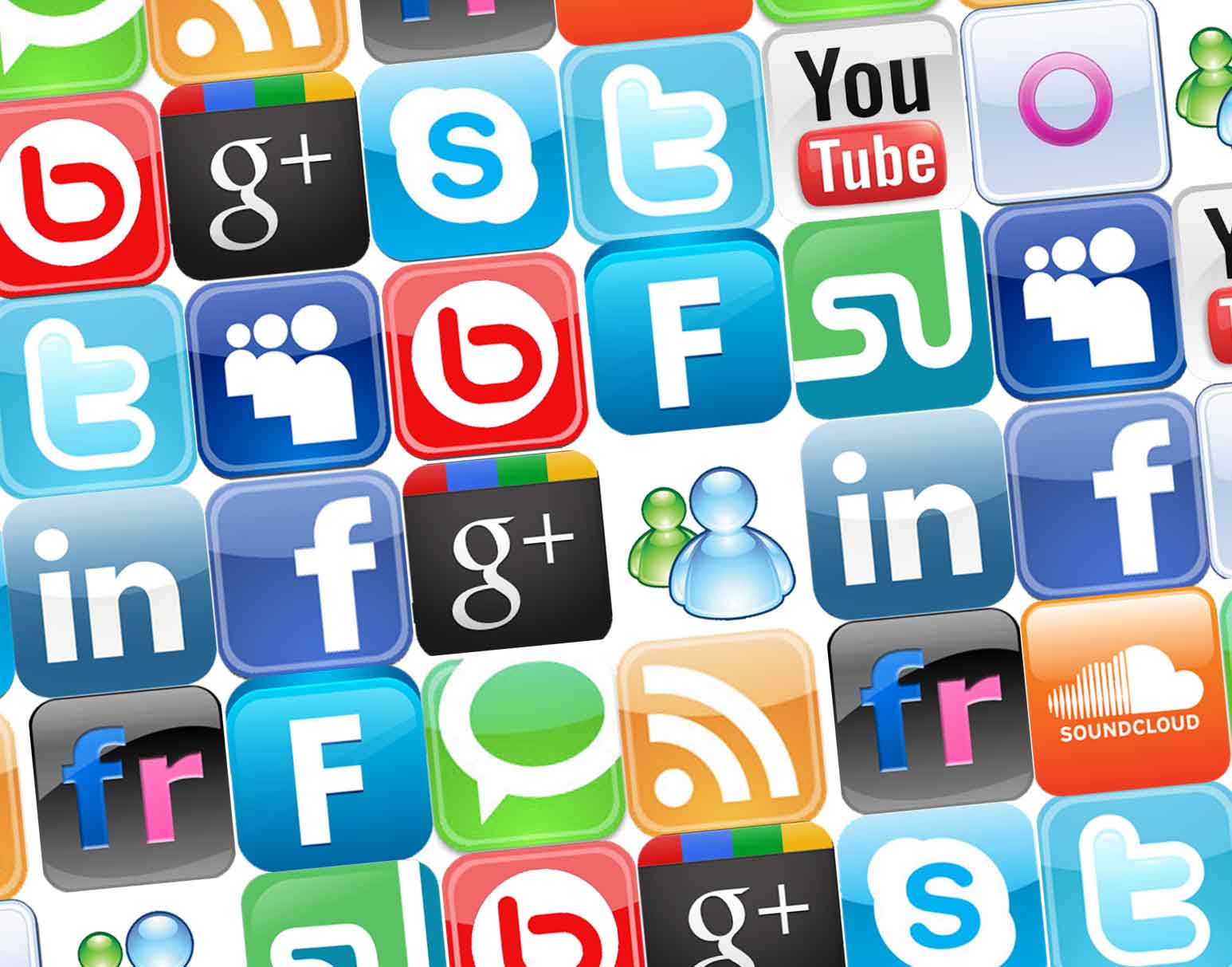 What has made social media and in particular social networks so successful in recent years is their ability to adapt and evolve in both their appeal and capacity. The premise has however remained the same; interactive communication. In today’s online world you can now tell us who you are, share photos and videos, make friends, follow Charlie Sheen, listen to your favourite artist, adopt a pet monster and call him Nigel; the list goes on. However where Facebook has prospered, far greater than its rivals, is not only through creating a solid platform where all this is possible, but also from which innovative new ideas and functions can stem; all whilst maintaining levels of trust and accessibility to the 800 million users it has now accumulated. Adverts for example are now beginning to find us through the information that we provide about ourselves online. The ‘Sponsored Stories’ down the right-hand side of our Facebook profiles essentially display personal adverts, based upon what we and our friends are ‘liking’. It is innovations like this that are revolutionising the way businesses operate, with the balance of power shifting to new digital formats. Unsurprisingly, technology giants such as Microsoft noticed Facebook’s potential early on but since turning down a $1 billion offer at the ripe old age of 22, followed by $15 billion a year later, Mark Zuckerberg has not just held on to his creation and developed it to worldwide dominance, but has created a brand new global culture. 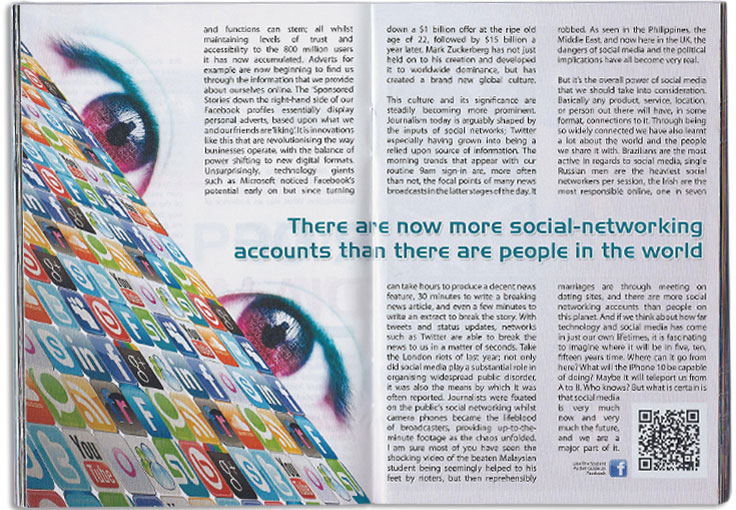 This culture and its significance are steadily becoming more prominent. Journalism today is arguably shaped by the inputs of social networks; Twitter especially having grown into being a relied upon source of information. The morning trends that appear with our routine 9am sign-in are, more often than not, the focal points of many news broadcasts in the latter stages of the day. It can take hours to produce a decent news feature, 30 minutes to write a breaking news article, and even a few minutes to write an extract to break the story. With tweets and status updates, networks such as Twitter are able to break the news to us in a matter of seconds. Take the London riots of last year; not only did social media play a substantial role in organising widespread public disorder, it was also the means by which it was often reported. Journalists were fixated on the public’s social networking whilst camera phones became the lifeblood of broadcasters, providing up-to-the-minute footage as the chaos unfolded. I am sure most of you have seen the shocking video of the beaten Malaysian student being seemingly helped to his feet by rioters, but then reprehensibly robbed. As seen in the Philippines, the Middle East, and now here in the UK, the dangers of social media and the political implications have all become very real.

But it’s the overall power of social media that we should take into consideration. Basically any product, service, location, or person out there will have, in some format, connections to it. Through being so widely connected we have also learnt a lot about the world and the people we share it with. Brazilians are the most active in regards to social media, single Russian men are the heaviest social networkers per session, the Irish are the most responsible online, one in seven marriages are through meeting on dating sites, and there are more social networking accounts than people on this planet. And if we think about how far technology and social media has come in just our own lifetimes, it is fascinating to imagine where it will be in five, ten, fifteen years time. Where can it go from here? What will the iPhone 10 be capable of doing? Maybe it will teleport us from A to B. Who knows? But what is certain is that social media is very much now and very much the future, and we are a major part of it.