The second of Green Day’s ¡Uno! ¡Dos! ¡Tré! trilogy arrives during a time of turmoil for the Californian quartet, having cancelled all of their shows and public appearances for the foreseeable future due to lead singer Billie Joe Armstrong’s ongoing treatment for substance abuse.

Consequently, not much of a fuss has been made on the airwaves or in ink leading up to its release. The lack of public awareness is a shame, because this is an album that deserves to be heard. After the relatively slow start of minute long opener See You Tonight, ¡Dos! demands your attention with F**k Time a hard, bluesy opener with its tongue firmly in its cheek that sets the mood for what’s billed as the trilogy’s “party record”. 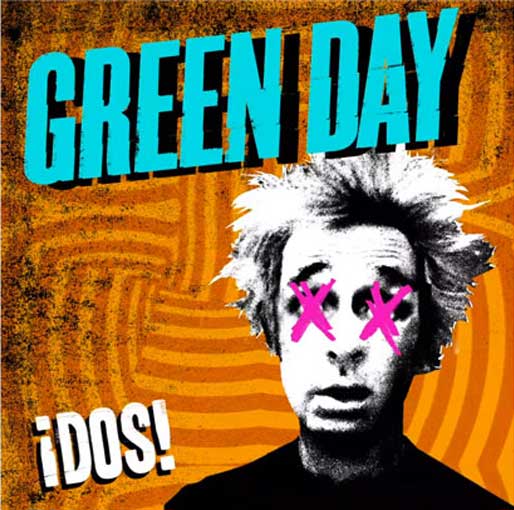 Lazy Bones and Wild One are both slightly more restrained and overall have fairly melancholic lyrical and instrumental content, the latter containing a dreamy guitar solo punctuated with soothing backing harmonies.

Makeout Party is every bit as wild as its title might suggest and contains a bass line in the middle eight courtesy of Mike Dirnt that’s dirtier than the song’s lyrical content and makes the track its own, helping it emerge as a highlight.

Another absolute gem is Stray Heart, once again featuring excellent bass work in the form of a riff that’s drowned in 60s rock ‘n’ roll, as is the rest of the song and its tale of hopeless devotion. It’s effortlessly cool and has more than a hint of Foxboro Hottubs (the group’s side project) about it.

Anyone hoping for a return to Green Day’s old school punk roots will no doubt enjoy Ashley, a hard and fast pop-punk  nugget, which could easily fit on 95’s Insomniac, the same going for Baby Eyes with its rallying chorus of Wo-oa-ah/God bless your fucking soul and dark guitar sections.

After another garage rock screamer, Lady Cobra precedes what could well be the band’s most obscure song ever-Nightlife. Featuring the previously mentioned Lady Cobra rapping (!) over a creeping bass line and accompanied by a haunting vocal, it’s the most controversial direction the band has gone in since the rock-opera phase heralded by 2004’s American Idiot. Much like that album, some will applaud the band for their boldness, whilst others utterly despise the complete turnaround.

Fortunately for them, normal service is pretty much resumed on Wow! That’s Loud! and although the guitar riff sounds like nothing the band has done before, it’s much closer to the mid 90s Green Day sound so many are familiar with in its vocal melodies.

¡Dos! ends as gently as it begins in the shape of a slow burning tribute to the late Amy Winehouse. The aptly named Amy features little else but Armstrong and a guitar, coming together to create a fitting end to a roller coaster of a record. It dances along slowly and elegantly, and demands attention similarly to F**k Time, albeit much more subtly.

Those were left feeling underwhelmed by ¡Uno! shouldn’t be put off. Whilst ¡Dos! shares a similar sound, it feels much more full bodied, whilst at the same time being a more diverse and experimental album. The quality of the two is empathised when listened back to back, which should make ¡Tré! an interesting end to an ambitious project.