Rihanna’s Unapologetic debuts at #1 on the Billboard charts – another fine accomplishment in her remarkable career. Jakub Pipka tells us what all the fuss is about…

‘Unapologetic’ is filled with 14 new tracks (15 if you decide to buy the deluxe edition) offering a mixture of musical styles. From an edgy and electro-pop ‘Phresh Out the Runway’, sensual ‘Loveeee Song’ featuring Future, to a controversial ‘Nobody’s Business’.

This album takes me back to ‘Rated R’ released in, surprisingly, November 2009. The much darker and painful sounds show a powerful and evolving young woman with an attitude. I could see tracks such as “Mad House” and “The Last Song” from ‘Rated R’ easily match the newest release of the ‘We Found Love’ singer. 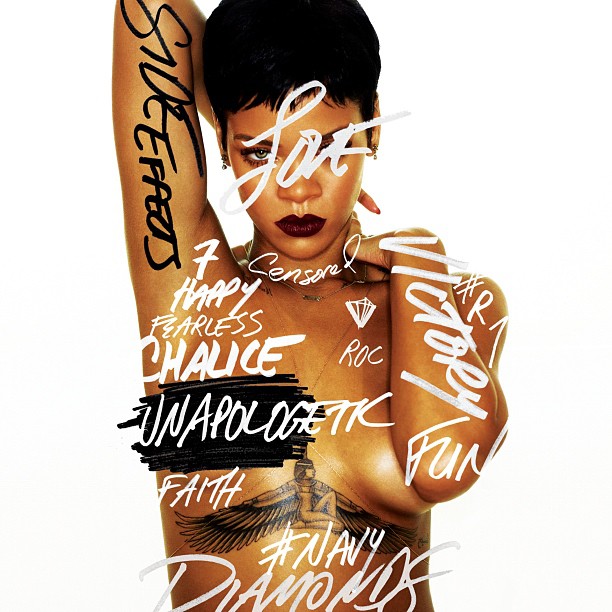 In September, Rihanna introduced pop-culture to ‘Diamonds’, a mixture of pop, soul and electronic music, promoting her 7th album. You won’t find anything similar on ‘Loud’ or ‘Talk That Talk’. This time she didn’t go for a stereotypical club tune, but offered something completely different. Sia Furler, one of the best songwriters in mainstream music, co-wrote this track and the effects can be heard. It took more than a day for it to grow on me, and although I’ve got it for over two months now, it still remains on my ‘recently played’ playlist.

Behind the production side of the album stands a group of familiar names. Once again we can listen to a collaboration with The Dream (the man behind Umbrella, Hard and Birthday Cake) and the Norwegian producing team Stargate (previously recorded with Rihanna songs such as Talk That Talk, Only Girl, S&M, Rude Boy, Unfaithful and Don’t Stop the Music). The producer and writer of the hit single ‘Who’s That Chick?’, David Guetta, made Rihanna’s shortlist with two new songs on the album.

The ‘Birthday Cake’ singer has also brought ballads to Unapologetic. ‘Numb’ and ‘Stay’, adapt well with the album’s darkness, however, seem unconscious. I was looking forward to listening to the Rihanna vs. Eminem ‘Numb’ collaboration, but I was left disappointed. The track is far from matching their previous ‘Love the Way You Lie’ collaboration. The mash-up of ‘Love without Tragedy’ and ‘Mother Mary’ shows the Rihanna I enjoy listening to, showing originality and fearlessness. Reggae surrounds the ‘No Love Allowed’ track, reminding us of the singer’s roots and style in ‘Music of the Sun’ and ‘A Girl like Me’. Subtle and catchy ‘What Now’ is something Rihanna should be proud of and I hope it will end up being the next single.

‘Unapologetic’ has some amazing songs (What Now, Diamonds, Love without Tragedy/Mother Mary), but also weaker tracks (Right Now, Jump, Numb). In comparison to ‘Loud’ or ‘Talk That Talk’, most songs are not immediately memorable, and you have to listen to them more than once to get used to the new sounds. This, to some extent, shows the singer’s maturity and continuous development. I like the diversity and the fact that Rihanna gains clarity each time she releases a new album.