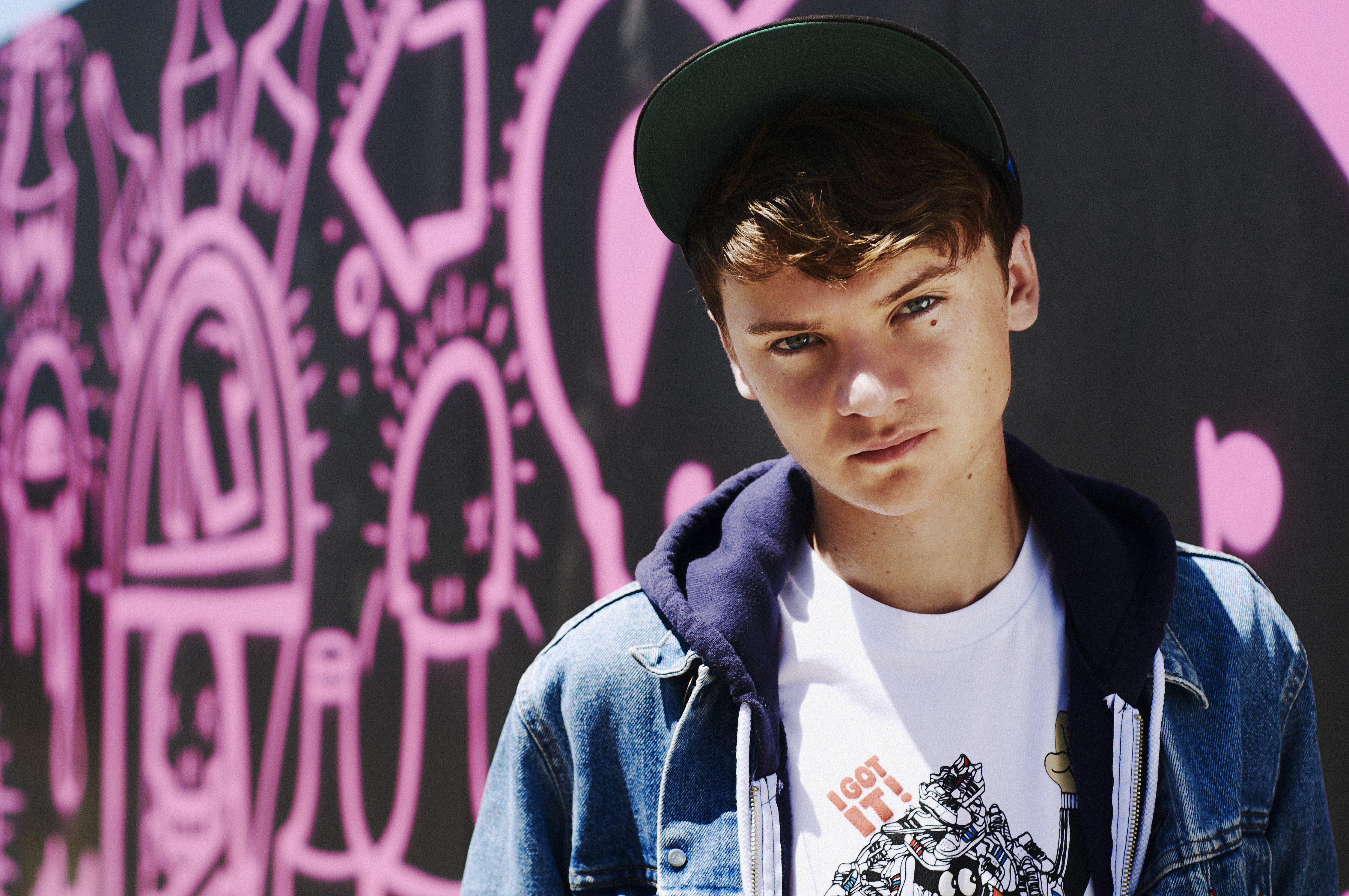 Conor Maynard took the pop world by storm in 2012. With a number one debut album and three consecutive top ten singles, it is no surprise that he scooped up MTV’s ‘Brand New for 2012’ award last summer, and has consequently seen his following of self-titled ‘Mayniacs’ grow ever larger and loyal. We caught up with the British Beiber whilst on the Norwich leg of his UK tour, and had quite a laugh in doing so!

Wicked thanks. I’ve got to start off by saying we were actually in the crowd when you turned up and got off the bus. The noise was unbelievable!
And it was all you!

Haha, yeah it was! It was the type of thing you see in movies, I’ve never seen anything like it before in my life…
Yeah, I mean my fans are called the Mayniacs so they have to live up to their name, I suppose. They like to make a lot of noise which gets a bit painful sometimes, but it’s a lot fun!

I think I might have burst an ear drum. I’ll invoice you the bill!
Haha, yeah OK! 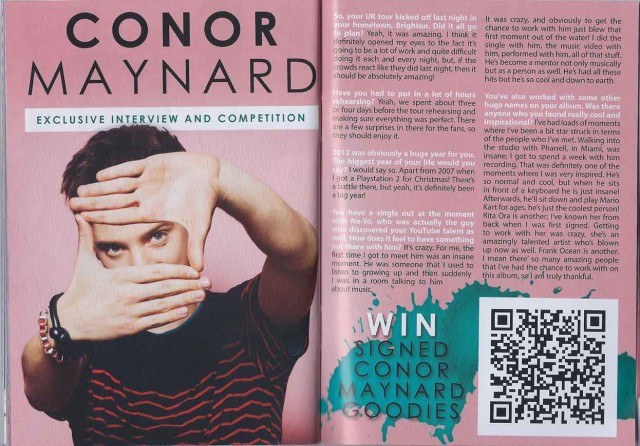 So, your UK tour kicked off last night in your hometown, Brighton. Did it all go to plan?
Yeah, it was amazing. I think it definitely opened my eyes to the fact it’s going to be a lot of work and quite difficult doing it each and every night, but, if the crowds react like they did last night, then it should be absolutely amazing!

Have you had to put in a lot of hours rehearsing?
Yeah, we spent about three or four days before the tour rehearsing and making sure everything was perfect. There’s a few surprises in there for the fans so they should enjoy it, definitely.

It’s obviously been a huge year for you. The biggest year of your life would you say?
I would say so. Apart from 2007 when I got a Playstation 2 for Christmas! There’s a battle there, but yeah, it’s definitely been a big year!

You have a new single out at the moment with Ne-Yo, who was actually the guy who discovered you on YouTube. How does it feel to have something out there with him?
It’s crazy. For me, the first time I got to meet him was an insane moment. He was someone that I used to listen to growing up and then suddenly I was in a room with him, talking to me about music. It was crazy, and obviously to get the chance to work with him just blew that first moment out of the water! I did the single with him, the music video with him, performed with him, all of that stuff. He’s become a mentor not only musically but as a person as well. He’s had all these hits but he’s so cool and down to earth. 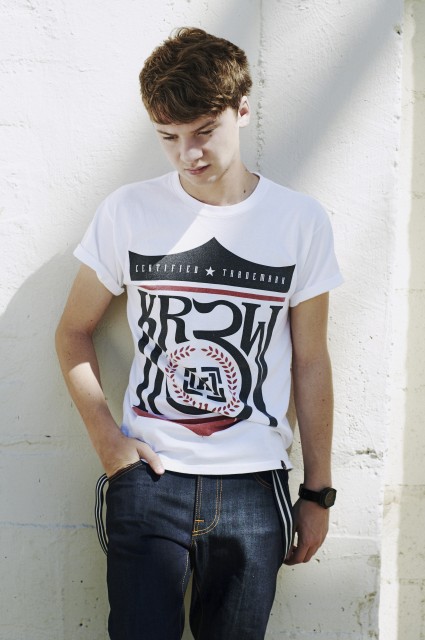 You’ve also worked with some other huge names on your album. Was there anyone who you found really cool and inspirational?
I’ve had loads of moments where I’ve been a bit star struck in terms of the people who I’ve met. Walking into the studio with Pharrell, in Miami, was insane; I got to spend a week with him recording. That was definitely one of the moments where I was very inspired. He’s so normal and cool, but when he sits in front of a keyboard he is just insane! Afterwards, he’ll sit down and play Mario Kart for ages; he’s just the coolest person! Rita Ora is another; I’ve known her from back when I was first signed. Getting to work with her was crazy, she’s an amazingly talented artist who’s blown up now as well. Frank Ocean is another. I mean there’ so many amazing people that I’ve had the chance to work with on this album, so I am truly thankful.

Moving off music slightly, you have recently appeared on a couple of major British television programmes. Never Mind The Buzzcocks being one and also Celebrity Juice, which was hilarious!

I can’t believe my parents actually watched that! I put up a status on Facebook to all my friends saying, “I’m going to be on Celebrity Juice tonight, Mum please don’t watch!”. She wasn’t actually going to watch but then she kept getting phone calls about it, so she ended up watching it with my Dad, and now they want to disown me…

A sex education lesson from Keith Lemon as well, not many people get that opportunity!
No, exactly! I learnt a lot of things that day. I feel truly enlightened in that sense of my life!

I’ve always wondered what he’s like in person. Is he that wacky off camera?
He’s exactly the same! He’s just crazy, but a really cool guy.

Did you get a chance to speak to Katie Price off camera as well?
Yeah, I did. We actually had something to speak about. She’s spent a lot of time in Brighton, I’m obviously from there, so we had a little chat about it. I think sometimes she gets a bit misread on those kind of shows because she knows what she’s going to get, so she builds up this defence. She always says she comes across as rude on TV shows but she’s just trying to defend herself. But, she was actually really nice off camera, she was really cool. A lot of my friends were saying to me “You should watch out for Katie Price” and I was like “Why, what’s going to happen?!”, but like I said she was really nice.

She said you were a bit of alright as well…
Haha! She said something that I didn’t understand at first! I said to her, “Oh, apparently if I was a bit older…” and then she said, “Yeah, you’re a sort”. I was like, I have no idea what that means! 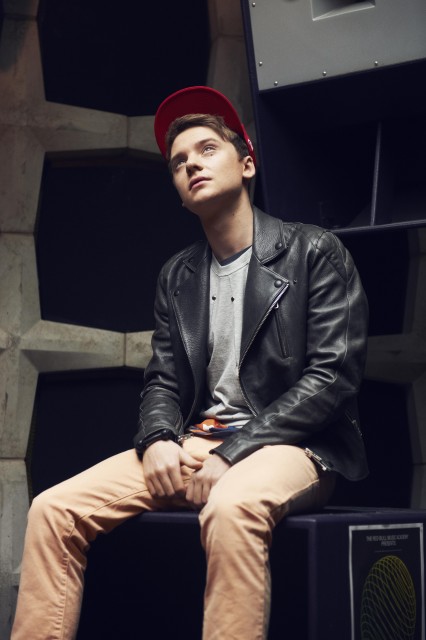 I’ve been following you on Twitter recently, not that I stalk you or anything…
That’s why you were screaming outside when I walked in! “I’m really just a fan, all these cameras are a set up”…

Haha, yep! Where was I?.. Twitter, Paranormal Activity 4!
Yeah, I just watched it at a VUE Cinema. Have you ever been into those VUE Xtreme cinema rooms?

The 3D rooms?
Yeah, I think they’re 3D but also the screen is like an Imax, they are huge! There is literally nowhere to hide. It’s one of those films where it’s that scary you’re just laughing and waiting for something to happen. Then it happens and you s@*t yourself! I was on edge the entire film.

The tweet you put up afterwards was, “If I see another little kid I’m running off in the opposite direction!”. Did you run?
Haha, yep! All the little kids that have come to my shows, I’ve told security not to let them in.

From now on, all little kids are banned from Conor Maynard shows…
That’s my whole fanbase! Haha, joking!

We’ve recently spent some time talking to students and have been asking them the same four questions. Can we ask you the same and see how you match up? Yep!

What is your guilty pleasure?
Probably chick flicks.

Twilight?
You know what, I’m not a fan of Twilight. I’m going to give the last one a chance to capture me but so far, I’ve been struggling.

Question two. A summer memory?
Probably getting drunk at the beach, hiding from the police… Don’t drink kids!

It’s not cool! Question three. Your best, worst joke?
OK. A dinosaur, a dolphin and a lizard went to the supermarket. The dolphin ate all the bananas, and the dinosaur ate the dolphin…

I’m going to be hanging on to the punch line all evening! Cheers for that, it is bad!
Haha yep!

Fourth and final question. Finish this sentence, the awkward moment when…
You’re texting someone about somebody else, but you send it to the person you’re talking about. Especially if you’re saying something really bad about them.

I like it. So, to wrap things up, what plans have you in line for 2013?
I’m probably going to spend a lot of time in America; my album comes out in January over there so I’ll be doing a lot of work. I’m going to be working on new music; I’m actually now working on some new stuff for upcoming singles and albums. So yeah, I think I’m just going to continue working on new music, doing different shows, and hopefully another tour so I can come back here, which would be really cool!

Wicked, well thanks for talking to us Conor!
All good, nice to meet you man.