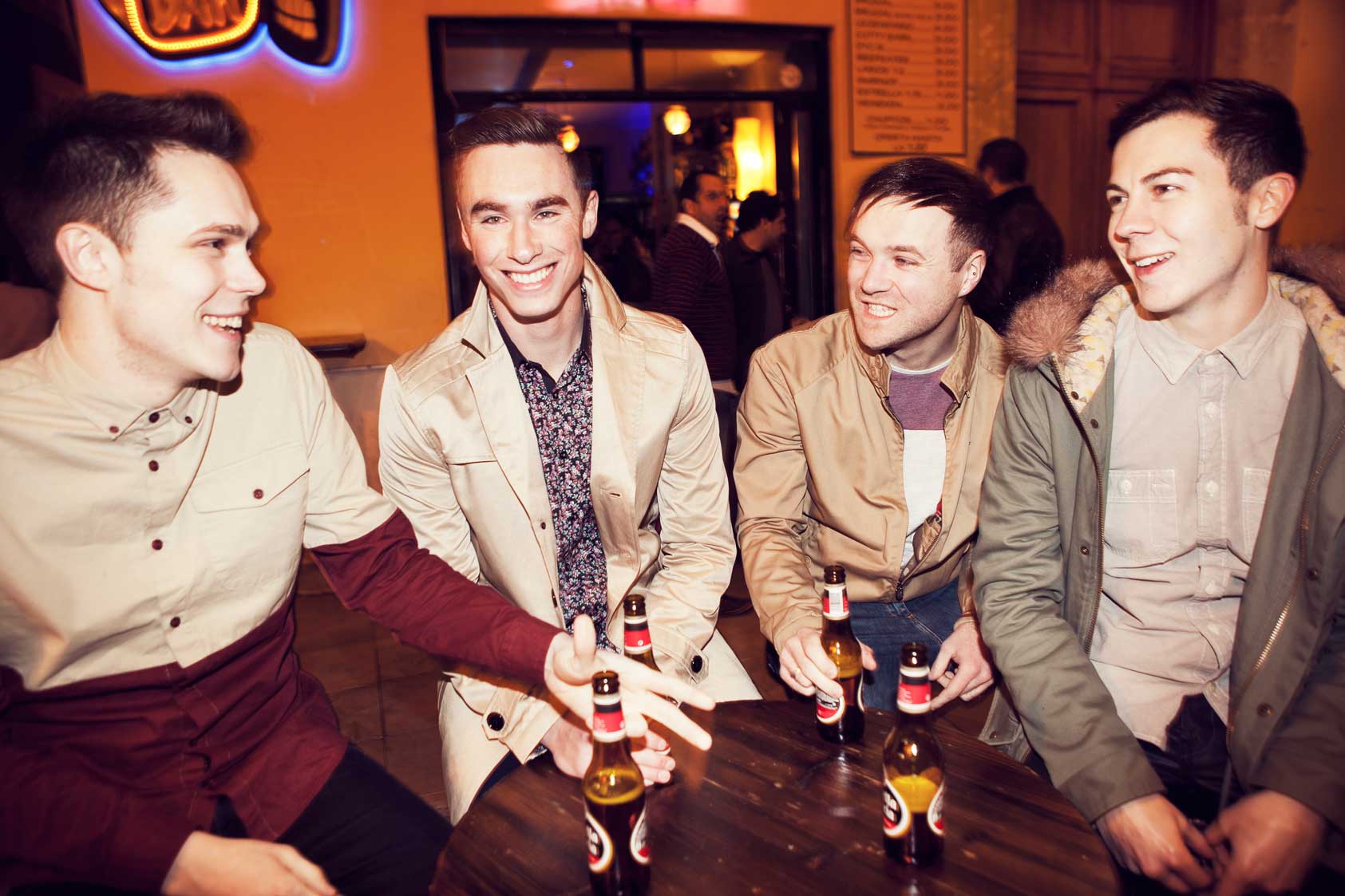 Since finishing university, Don Broco have hardly stopped. With a ton of tours and festivals under their belt, the band launched head-first into recording their debut album Priorities, and came up with one of the finest rock records of 2012. We caught up with lead vocalist Rob Damiani during the band’s UK tour for a chat about pubs, festivals and bottles of wee…

Hi Rob, how are you?
Yeah good thanks.

So, you played in Norwich last night…
Yeah, it was the first show. It was awesome man, really good show. Nice way to kick it off.

Norwich is where Simon went to uni. Did he give you a bit of a tour around the city?
Well, not really. We didn’t have loads of time, but we managed to pop out really quickly, and we were looking for somewhere to eat. What was that place we ate last night Si?

[Simon] Oh, it was the Rumsey Wells!

Yeah, the Rumsey Wells on St Benedicts Street, and it’s like an old school pub with like pies and sausages and mash – really hearty, stodgy food. It was a really nice meal to start our tour with! Si’s got a few mates who are in Norwich, so we went for a bit of food with them, but we unfortunately didn’t have a chance to properly roam the city, but we’ve been out once or twice there before, and it’s always a good night.

And you’re in Birmingham tonight?
Yeah Birmingham. It’s a big one tonight, so it should be a good show.

Are you travelling at the moment?
Yeah, we are… Basically getting on the M6, we’re getting plenty of time in Birmingham to set up. We’ve got some radio and some press there to do when we get there. We want to be properly in the zone for Birmingham, because it’s one of the biggest venues on the tour, and the actual venue got upgraded because it sold out so quickly, and then sold out again. Birmingham’s become a bit of a home from home for us really; we’ve done some really good shows there.

So, you won’t get much time to spend in Birmingham then?
Well, we’re going to Kerrang Radio, who are based in Birmingham. I think by the time we’ve done that and then got to the gig to soundcheck and everything else we might not have a load of time. Plus, we’ve got a lot of mates here in Birmingham so it’s nice to catch up with them. Our manager’s from Birmingham too, so he always brings his whole family down to see us. I can see it being pretty manic!

What’s life like on the Don Broco tour bus?
Well… at the moment, it’s pretty crap! We’ve basically got a full van this tour, where we’ve basically just brought out as as many of our mates as we can really. But we’re in the same van we’ve been in for the past two years. So every seat’s full up, we’ve got loads of bags, bags on my lap, coats piled on me. But it’s fun, we have a laugh on tour. We put some tunes on, tell some jokes, talk about fit birds we saw at the show last night, general banter, a bit of a laugh. We’ve got some characters on the van.

At the moment we’re all absolutely knackered, but once we all wake up it’ll be fine! 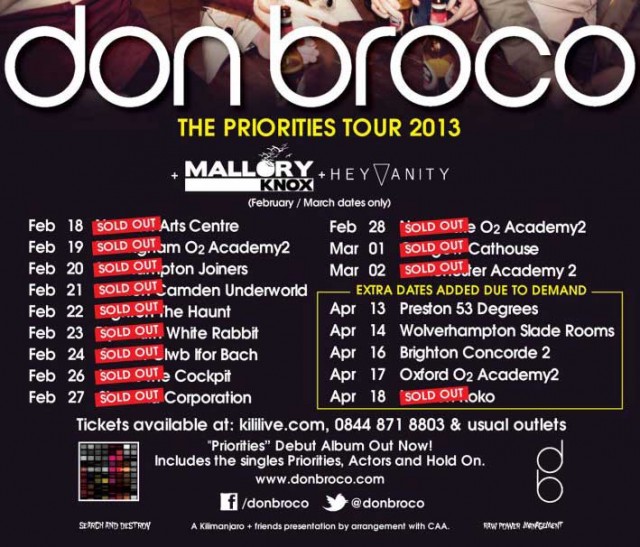 Does anyone have any annoying habits on tour?
Ummm… Curtis [merchandise] is a bit of a snorer. Apart from that everyone’s relatively pretty clean. Although on the last tour, Andy [from Burn the Fleet] had an annoying habit of stabbing plastic bottles with a fork. Simon, who hadn’t realised this, was busting for a wee. He picked up an empty bottle he found on the floor to wee in, and the wee was in there and it was fine. I don’t know why he decided to start squeezing the bottle, but it happened to be the bottle that Andy had punctured with a fork and the wee went all over him. But I’m sure Andy won’t be tricking anyone on this tour. Or will he…?

[Andy] We haven’t started yet!

What about festival season; do you have much planned for it?
Yeah, we’ve got a few smaller festivals already booked in, which we’re pretty stoked about. We’re basically doing a new festival, it’s the first year it’s ever happened, called Radstock in Liverpool, and that’s with The Blackout and We Are The Ocean. We’re also doing another festival with both of them in Southampton, called Takedown Festival. That will be wicked. The big one we’re really stoked about is Hit the Deck Festival, which is like a two-dayer in Nottingham and Bristol. We played it last year, when it was just in Nottingham, and it was amazing, and this year we’ve been asked back to headline it. It’s a big deal for us, we’re really excited. Nottingham is a place close to our hearts. Me and Matt both went to uni there, so it will be nice to get back there, and we’ve had some amazing shows there before, so it should be a lot of fun.

I was checking out your merch online, and the one that caught my eye was the Don Broco iPhone case. That’s very modern, isn’t it?
Aha! Yeah, we only got that a few days ago, and we’re well stoked! We’re always trying to think of different things to whack on the store, and we thought about iPhones, everyone needs an iPhone case, we thought we’d give it a go and they’ve come out really well!

Do you have any more ideas like that?
That’s the only phone case we have going at the moment. We’ve got a few other new things for the tour like wristbands, badges, posters, and we’ve also brought out a few new T-shirts. We’ve finally got an actual tour T-shirt. It’s the first proper tour we’ve ever done, and we thought to do things properly, we need to bring out a tour T-shirt. It’s a really nice piece of memorabilia to have, and we’re really pleased with that one.

Sounds good! How about going a bit retro and trying out some Don Broco mouse pads?
Oh, that is pretty old school! I could see that working with the artwork, potentially.

What about a Don Broco yoyo?
Wow, I like that a lot! That is a cool idea. We could do a limited run of yoyos. I could do the ‘walk the dog’ thing, and the ‘cat’s cradle’. We could get Curtis to do it on Merch as well, and do tricks the whole time. Yeah, I like the sound of that man, I might have to take you up on that.

Your album, Priorities, came out back in August last year. What’s the response been like since then?
Yeah, it’s been amazing. When it first came out we were over the moon because it charted, and we didn’t have any idea it would. We actually did the album release show on the Monday, woke up on the Tuesday and they told us it had gone into the midweek UK 40 Album Chart in the top 10, so we were absolutely stoked with that. Since then as well, you can see just more and more people get on board who had the album played by their mates, or seen it online, checked out a song and then got it. So yeah, it’s been really wicked and nice to see it grow. It was the first show last night, so early days, but there were a lot of people who hadn’t seen us before who just got the album off their own back and just fell in love with it. So yeah, just really nice.

Awesome! So your latest single is Whole Truth, what can you tell me about that?
Well, it’s probably one of the favourites from the album talking to fans at shows, and live it just goes down amazing. We’ve had a few singles out, but we really wanted to do this one. It’s a song about being a bit of a naughty boy, cheating on your girlfriend. It’s something that happened to one of my mates that he told me about, and basically going through the processes whether it’s better to tell them and come clean or not. But I mean, despite the dark, I guess, subject matter, it’s a real fun tune, big bouncy riffs that get everyone jumping at shows. We just did a video for it as well, which was a lot of fun to make. We had a few girls down, had a little party going, got to dress up a little bit. It’s a classic Broco video where we had a bit of a laugh. I can’t wait for that one!