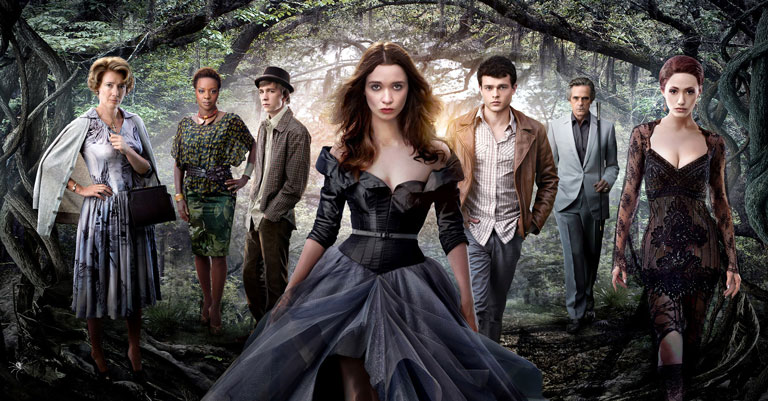 The ‘witch theme’ has become really popular in the early months of 2013 and after the success of Twilight, the supernatural world it seems is the main source of inspiration for teen films. Hansel and Gretel: Witch Hunters and Beautiful Creatures were released earlier this year, keeping the screen rooms full of fans of the magic world and fairytales…

However, both films are as different from each other as it is possible. Based on a Grimm story, Hansel (Jeremy Renner) and Gretel (Gemma Arterton)  are on a witch killing spree that began during their childhood. Now professionally, they go after ‘nature’s mistakes’ and save the world, or mostly small villages, from evil. You may remember Jeremy Renner and his performance in The Hurt Locker (a must-see), which won an Oscar for best motion picture in 2010. At the same time, the beautiful Gemma Arterton gained popularity as a Bond girl in Quantum of Solace and ever since has chosen her projects wisely. Hansel and Gretel: Witch Hunters is an entertaining film with lots of special effects, lacking sense of humour at some points, but compensating with the amount of blood spilled around the set. It may remind you a bit of The Brothers Grimm (2005), with the late Heath Ledger, Matt Damon (who we will see in Elysium this August) and the gorgeous Monica Bellucci.

In February, the month of love, the Beautiful Creatures premier attracted millions of fans all over the world. Surprisingly, the director of the film is Richard LaGravenese, who is also behind projects like PS I Love You and Paris, Je Taime, both of which are brilliant romantic films. Although the production of the film betters Twilight due to the special effects and eye- pleasing scenes, the story lost sense at times and came close to ridicule. Alden Ehrenreich and Alice Englert have done their best to depict the young teenage love that involves huge promises for uncertain future. If you manage to stay in your seat for the whole film, you at least won’t be disappointed with the end of the film, which against all expectations, is a bit surprising. Beautiful Creatures is a well-filmed production, which, however, lacks creativity when it comes to the plot.

Hansel and Gretel: Witch Hunters and the romantic teen drama are a part of the fantasy wave that will flow through 2013. In March, audiences will be able to see Jack The Giant Slayer and Oz The Great and Powerful. The latter is expected to be a grandiose adventure project that we associate with names like James Franco, Michelle Williams and Mila Kunis. Until then, you can still check the grown-up version of Grimm’s tale and Beautiful Creatures and decide for yourself whether witches will follow the vampire hype.