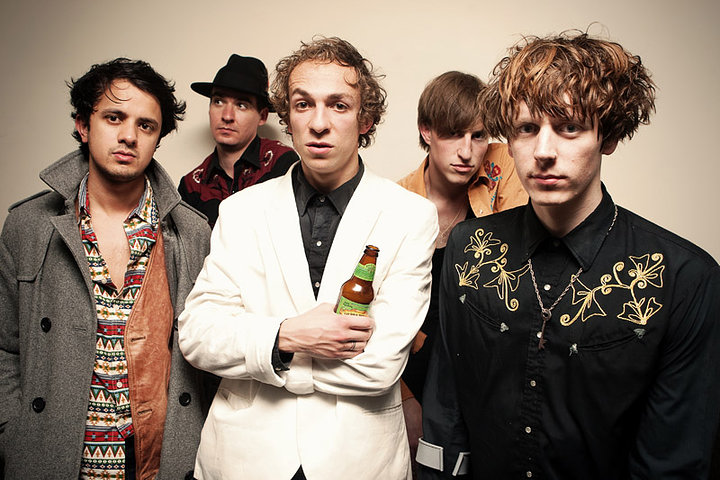 Since bursting onto the scene back in 2004 with their early demo recordings, Mystery Jets have become one of the country’s most loved indie bands, releasing four well received albums and performing a countless number of shows in that time. During their recent UK tour, we spoke to guitarist William about foreign cuisine, their American inspired album, and an audience member’s bad habits…

It’s been a very expansive tour for you; you’ve been around the UK, America, Canada, Asia, Australia, etc. How’s it been? Has it all been quite tiring?
It’s been great! It hasn’t all been in one go; we did America in April for about three weeks, and then we did about three weeks around Asia and Australia. There’s been like a month off between each tour, and now we’re doing England and Europe, so it’s manageable. It’s been great fun. We’d never played in Asia before, and that was an amazing, amazing experience.

Do you get much time off to enjoy other countries?
It depends. Sometimes we fly through them and we don’t see anything apart from the back of a bus, a venue and an audience. But other times we’ve had a few days off. We had a day off in Taiwan, and had a look around the night market there. They’ve got really strange eating habits out there; they like eating snakes, turtles, and reptiles. So that was quite an eye opener!

Did you have any weird experiences on tour?
Well, Pete ate some toad soup in Taiwan, and for the rest of the tour he spent large amounts of time on the toilet. That was kind of a running joke for a lot of the tour! Excuse the pun.

On this tour, you’ve got nine different support bands. What’s it like travelling around with so many different bands? Were they your choices?
Yeah, they were all our choices. They’re a collection of each of our favourite new bands who are around at the moment. It’s really nice playing with a lot of different bands because you get to meet different people and hear different things each night, and it keeps it very exciting for us. I think it’s cool for the audience as well. We always try and keep our tours as interesting as possible.

You recorded your recent album, Radlands, over in Austin, Texas. Why did you decide to record it over there?
A number of reasons. We’ve always wanted to make an album in America with an American feel to it. After our third record, Serotonin, it felt like the time was right. And also, we’d done all our recording in London before, and London for us, about eighteen months ago, had become a little bit boring musically. We weren’t really that excited by many of the bands that were coming out of London back then. I don’t even think there were many new bands eighteen months ago. It’s changed now. I think we just felt we’d done enough in London and it was time to go somewhere else. 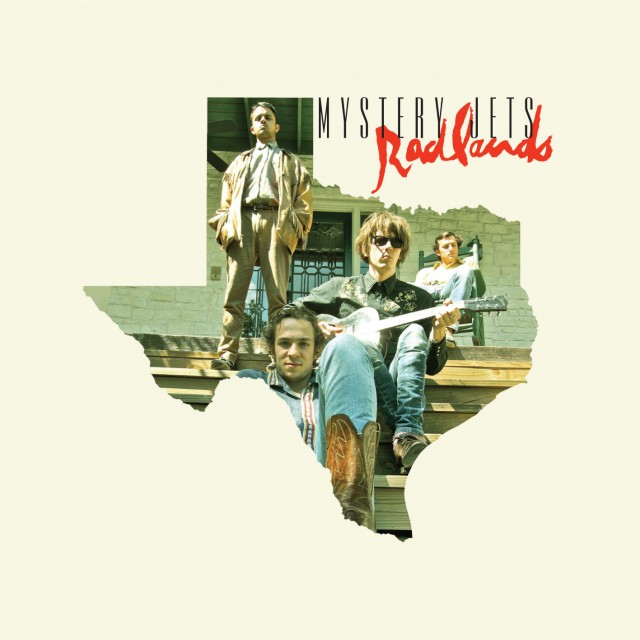 You’ve continued the American theme throughout the album, particularly with the album cover and other imagery. Have you always been inspired by America?
Not always. We got into it because we were running out of inspiration and influence so we looked elsewhere, and America looked like the place to go. I think America is exciting in a lot of different ways as well, because it’s a relatively new country, and it feels like you’re on some kind of frontier when you’re out there, and that’s a good place to make a record, because it’s invigorating.

Recently, NME ran an Ultimate Bands feature, and Harry from Peace picked you as his ideal guitarist for a dream band.
Oh right, ok, cool!

Did you not know about that?
I might have heard something about it, I hadn’t actually read it.

Quite a compliment!
Yeah, that is very nice! We toured with them in March and we got on with them really well. They’re really great people, great guys. I wouldn’t mind being in a supergroup, that would be really fun!

Who would be in your supergroup?
Hmmm… I’d have Mitch Mitchell on drums, I’d have Stevie Wonder on keyboards and backing vocals. Miles Davis would be the musical director. Nile Rodgers on guitar. I’d be on guitar as well, I’ve got to put myself in there! McCartney on Bass maybe… I don’t know if that would work. Yeah, why not!

So, just before Radlands was released, Kai left the band.
Yeah, that was around January last year.

What’s it been like without him since then?
It’s worked out really well for us and for him. When he decided he wanted to go, it was pretty scary, because Mystery Jets is the only band any of us have ever been in. We’ve always stuck together and played together. We were worried about how we were going to replace him, but it’s worked out really cool; we’ve got Pete on bass and Matt on pedal steel. I think also it kind of came at a good time because Radlands doesn’t really sound like any of our older records, and that’s partly because of the pedal steel that’s on it, and partly because of the American feel. There were a lot of changes happening and I think, because it sounds so different as a record, it helped us lessen the blow of losing Kai and stuff. But it’s worked out well. We do miss him and he’s a great friend and always will be. But you know, paths go different ways.

Your most recent single was called Greatest Hits, but when do you think the Mystery Jets Greatest Hits will be released?
I don’t know, I don’t know… Greatest Hits albums scare me a little bit, because it can kind of be the nail in the coffin for your band, and they often get released after a band has broken up. It just feels like an end when you release a Greatest Hits; it implies that you’re not going to write any more good hits, because they’re all on this album. Unless of course you do a Greatest Hits Volume Two! I think we’ve still got a lot more song writing and a lot more growth and development to be getting on with before we start looking back and patting each other on the back for our old songs.

What’s your favourite Labrinth track?
I have lots! I really like Earthquake, I really like The Last Time. Yeah, those are my two key tracks.

Finish the sentence “The awkward moment when…”
The awkward moment when we played a gig in Zurich ages ago, and there weren’t many people in the audience, and someone in the crowd let rip, and the whole venue could smell it! We were up on stage playing Flakes I think it was, and we were all just dying with laughter. It was during verse three or something where it all gets a bit quiet and teary-eyed, and it was just the funniest thing that’s ever happened! No one knows to this day who was responsible for relaxing a little bit too much during one of our concerts.

What do you think the world will be like in 100 years?
I think… we probably won’t need our bodies anymore, I imagine. Maybe our lives will be online… We’ll be able to interact with people at the speed of light, and our bodies will just be these vessels that are contained and preserved in oxygen tanks, or whatever!