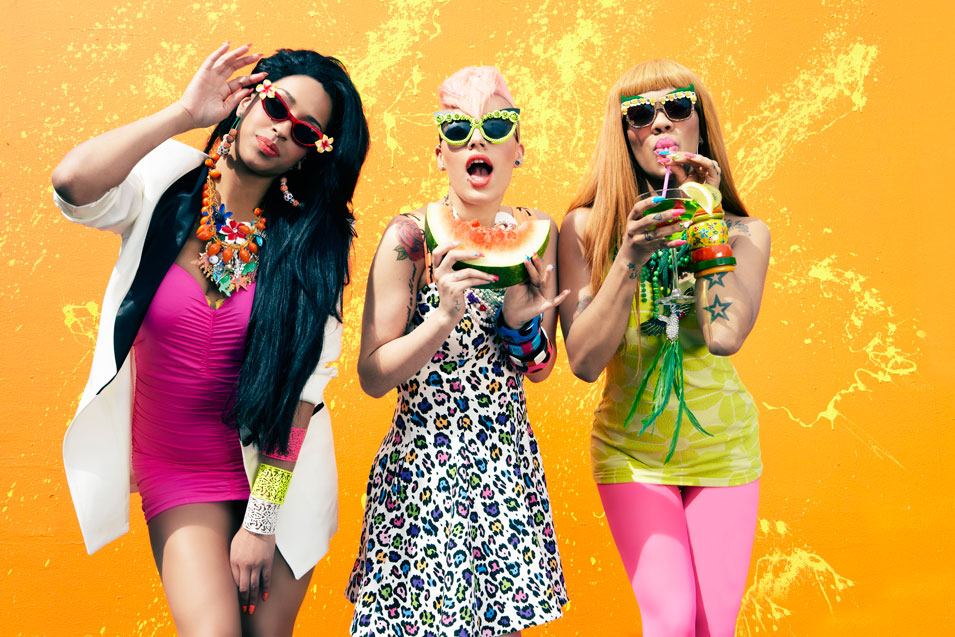 Stooshe’s outspoken sense of style and unruly wordplay has attracted a legion of fans and firmly established them as one of music’s hottest new artists. The rising girl band secured two Top 5 hits in the shape of ‘Love Me’ and the Gold-certified ‘Black Heart’ back in 2012 which were followed up by nominations for Best Newcomer at the MOBOs as well as Best British Single at The Brits. We caught up with one third of the trio, Courtney Rumbold, who spoke to us about her varying hairstyles, bowling technique and the all important release of their debut album…

Hey Courtney, are you alright?
I’m good thank you, how are you?

I’m very well thanks! I have to ask… What hair style are you sporting at the moment?
OK. Right now, I’ve got a silvery, grey, not a quiff but an up and back old-school Elvis comb over!

You’ve got rid of the blue and pink dye from earlier on this year then?
Yeah, it’s always good to change and switch it up! I’ve gone back to short hair now as well.

Do you get bored of hair styles quite quickly?
Do you know what, I really like my hair short; I’ve had it short for a really long time but I actually had to grow it long because all the damage of colouring your hair and stuff can result in it breaking up. My hair ended up being in really bad condition!

We’ve got to talk about your new single ‘Slip’, which is incredibly catchy by the way! How are you guys feeling about it?
Thank you! We’ve been away for a while and after Waterfalls we weren’t 100% happy with putting that out because we wanted to do our own stuff. We had our break, had our time in the studio to finish off other things and to make our next single something that we are all really, really proud of. So, I’m glad that it’s out there and had a really good reaction so far. The feedback has been great! 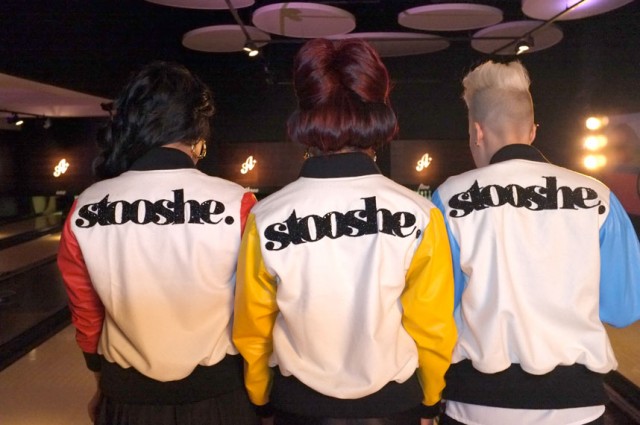 Stooshe on set for the 'Slip' music video.

I don’t know if you’ve seen the top comment at the moment on the YouTube video…
What is it?!

“If Slip doesn’t get to number one, then I’m going to slip off the edge of a cliff.”
Oh… That’s a difficult one to take! I could certainly laugh at that but I hope they’re not being serious!

I think it’s tongue in cheek…
Well, let’s hope it is because some people can take things a little bit further than others!

Did you feel Brian Barber [Outkast – ‘Hey Ya’] was the perfect match for you when making the ‘Slip’ music video?
Oh my God, he was incredible! He has worked with some really amazing people like Outkast and Destiny’s Child, so we had to be on top form! But I do think he was perfect. He wanted to bring out something new in us; normally we’re running around, laughing, joking about, so he tried to make us sexy for the camera, which I was laughing at! He would get up and show us what he wanted us to do, and made just as much of an idiot of himself as we were feeling, to help us understand. He is an amazing guy to work with.

Are you guys any good at bowling out of interest?
Well personally, I bowl backwards! I release the ball with my hand facing down if you know what I mean? I still get strikes though! Alex is the most competitive so she would be the one making sure she would win. 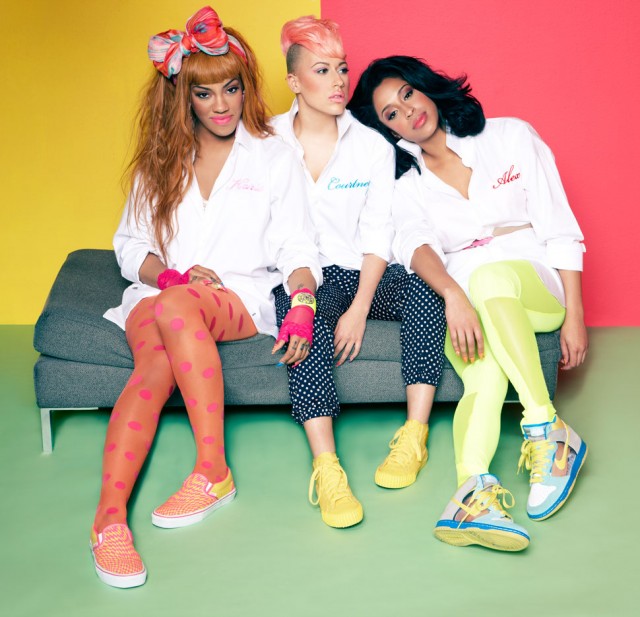 Moving onto your album, you’ve had to push the release date back a few times…
It’s definitely coming out in May! We just weren’t happy with it. When we left it from recording vocals in the studio thinking it was all fine, to then listening to the final copy after it had been mixed and mastered, we were like, “Oh my God, I do not like this!” The structures and the mixes weren’t how they should have been. We didn’t want to waste two years of our lives, and all that time, effort, heart and soul, for it not to go out 100% how we wanted it to. Collectively, we all agreed that it was best for us to push it back. I think it’s even better that it’s coming out now.

What were you like as students?…
Alex went to university and was actually in the band at the same time, so she was trying to juggle everything in her last year. [Shouts to Alex] What were you like as a student? [Waits] She says she was a lazy student! She did what she had to do and enjoyed uni life. Karis went to Brit School. I went to sixth form and just got along with it. I was never a terrible pupil but I was a little bit cheeky! My teachers seemed to like me though. I would wear jeans when we weren’t supposed to and would always get away with it!

What was the naughtiest thing you ever did?
It’s not necessarily naughty in terms of bad, but once, we had a police officer that used to be at the school – (this sounds really bad already!) – but, he came in to do a talk or something and I played a joke on him. I was in art and made it look like I had been beaten up, so he walked me to one of the head teachers and backed me up saying that I had. The head teacher was like, “oh my gosh!”, but then I had to say, “only joking…” and I blamed it on my friend as well!

One final question for you sent in from Jacqueline on our Facebook page. What are your biggest musical influences?
As there are three of us, there is quite a lot. Mine personally, I love the old school. All of us love The Supremes, The Temptations, Motown. I love The Beatles. As time changes you like different things. Artists like Mariah Carey, Whitney Houston and obviously the girl bands like Spice Girls, TLC, Destiny’s Child. It’s just a big collective thing. I even listen to things like ACDC! None of us are planted in one genre.