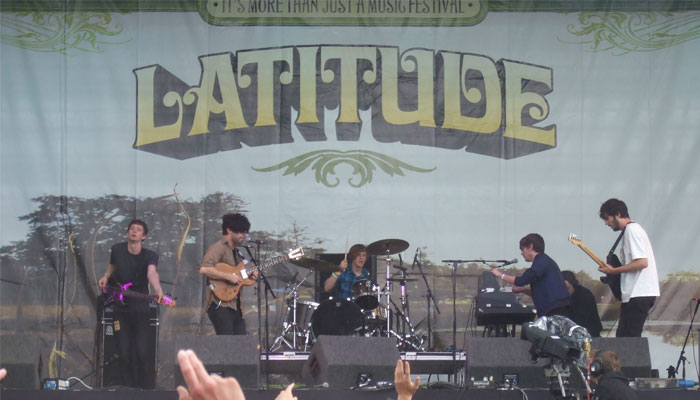 Set in the beautiful East-Anglian countryside at Henham Park, Suffolk, Latitude Festival has gone from strength to strength since its debut season in 2006. Now entering its eighth year, this unique occasion promises 11 dedicated arts arenas, stages and spaces with performances from a mix of artists across comedy, film, dance, theatre, literature, poetry and cabaret. Winning the 2012 ‘Best Family Festival Award’, it’s no surprise that this festival has consolidated it’s place as our country’s favourite multi-arts celebration. Here, we take you through what this year’s event has on offer and all the information you need to get yourself there…

Bloc Party
After a quiet few years culminating in the release their highly anticipated fourth album last August, we’re definitely excited to see Bloc Party back on the festival scene. Latitude is the band’s only festival slot on mainland UK this year, and with the added bonus of headlining the Friday night, this is definitely not one to be missed.

We’re expecting… a couple of brand new tracks, which they’ve recently been playing on tour in the US, as well as all the fan favourites from across their discography.

Kraftwerk
Another rare festival appearance, German-electronic legends Krafwerk will bring their incredible, critically acclaimed 3D concert to Suffolk with a headline slot on Saturday night. With ten albums under their belts, stretching back to 1970’s self-titled debut, it’s safe to say there will definitely be more than a few classics played.

We’re expecting… plenty of bleeps, bangs, pows, and some amazing 3D visuals that are sure to stick with you for quite some time.

Alt-J
After the knockout success of their debut record ‘An Awesome Wave’ which saw the Leeds quartet scoop up the prestigious Mercury Prize award, Alt-J have firmly cemented their reputation as one the UK’s most exciting indie bands. Latitiude is only one of two major UK festivals the group are playing at so count yourself lucky if you see them.

We’re expecting… the vast majority of ‘An Awesome Wave’ to which they owe their success.

Beach House
Dream pop duo Beach House make the trip across the pond this summer from their native Baltimore, Maryland. Consisting of French-born Victoria Legrand and Baltimore local Alex Scally, their self-titled debut album was released in 2006 to critical acclaim and has been followed by Devotion in 2008, Teen Dream in 2010, and Bloom in 2012.

We’re expecting… a performance of what they do best: sweet melodies, pleasuring the ears of those who delicately listen.

Dylan Moran
While still managing to keep a low profile recently, Dylan Moran has spent the last few years performing  shows across the world (in 2012, he became the first ever Irish stand-up comedian to perform in Russia!), and released his latest live DVD ‘Yeah, Yeah’ in 2011.

We’re expecting… Plenty of rambling tales and Irish anecdotes, as well as the occasional nonsensical interlude.

Sean Lock
One of our favourite comics on the scene right now, Sean Lock’s live show is always a highlight. With his Latitude set landing right in the middle of his ‘Purple Van Man’ tour (we’re looking forward to finding out what this means…), it’s safe to bet that Sean will be on good form as always. 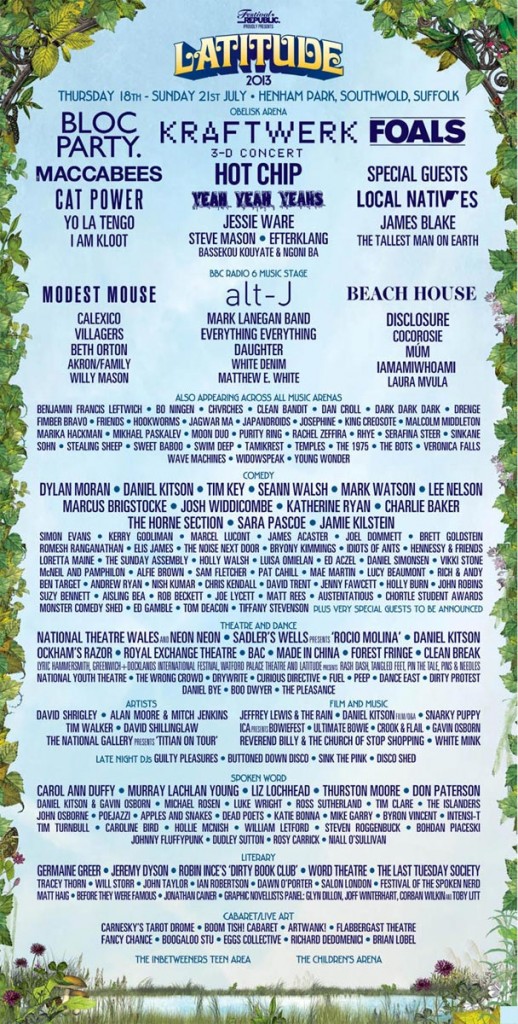 BEST OF THE REST

In the Literary Arena will be Robin Ince’s infamous Book Club returning with a sexy twist for 2013 featuring Kevin Eldon and Jo Neary. Alternative comedy badboy Keith Allen brings the recently revived legendary sixties salon The Anti-Establishment Club to Latitude whilst prolific all-round actor, comedian and writer, David Schneider, gives a testament to his understanding of social media, and so fittingly will explore the pertinent question: Is the Internet Making Us More Stupider?

In the Theatre Arena, Unlimited Theatre will take audiences on a mind-melting, jargon-free, whistle-stop tour of leading edge Quantum Physics in critically-acclaimed The Ethics of Progress. Pick of the Pleasance: Maison Foo will preview their comically dark tale Pendulums Bargain Emporium, told with intimacy and charm using their inventive visual blend of storytelling, puppetry and live music. Northern Stage will present The Man Who Thought the Moon Would Fall Out of the Sky, a fairy-tale filled with laughter, live music and a magical story that may or may not be true.

Tickets are now on sale, subject to booking fees. An instalment plan is available for fans who want to spread the cost of their Latitude weekend ticket between now and July, for full details head to
www.latitudefestival.co.uk