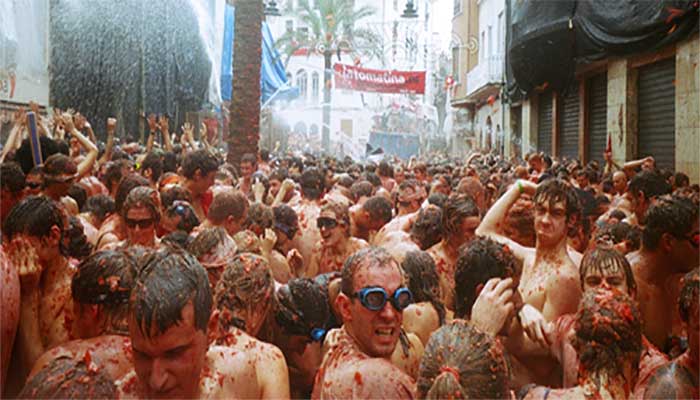 There’s another thing the Spanish do well, and that’s a fiesta. At certain times of year, locals from Valencia to Tenerife take to the streets for tomato-chucking, human towers and the sort of friendly chaos that would never fly in the UK. With the end of exams fast approaching, we take a look at some of the most famous – and eccentric – festivals to seek out on your Spanish holidays…

Tomatina
Throwing things seems to be a national past-time in Spain, judging by some of the better-known festivals. The most famous example is Tomatina, the pride and joy of Buñol, where thousands gather every August for a huge tomato fight. The festival’s origins are lost in the mist of history, and stories say it began as a political protest or a street scrap with a handy vegetable stall nearby, but one thing is certain: it has attracted tourists to this corner of Spain for nearly sixty years.

Haro Wine Festival
If you pride yourself on more sophisticated tastes (and enjoy a good tipple), check out the Haro Wine Festival for the epic ‘Battle of Wine’ on June 29th. It kicks off with a simple procession to the chapel, and it’s only after mass that the wine skins or ‘botas’ are unleashed. The goal: soak each other in the region’s finest Rioja. This unusual food fight dates back to a 12th century property dispute, and there are no discernible rules other than to expect stains.

San Fermin
San Fermin is a festival synonymous with Pamplona, where it takes place every July. While the crazed (or crazy, depending on your point of view) running of the bulls steals the spotlight, that event is only one part of a seven-day celebration of local folklore. Some of the less life-threatening highlights include fireworks, parades and an event known as The Roar where everyone makes as much noise as possible using drums, pots and whatever they can lay their hands on.

Catalonia’s Castells
Of Catalonia’s many local traditions, one of the quirkiest (and most fun) is the human tower competition that takes place every autumn. Serious contenders head for Tarragona, where the towers – or ‘castells’ – reach up to ten people high. The scene is awash with shouts and team colours as competitors scramble up and down without letting anyone drop. Thought to have developed from dance routines in the 18th century, these towering achievements have even been awarded UNESCO cultural status.

Tenerife Carnival
If you can’t make it to Rio next year, fear not: holiday-makers to Tenerife are in for a treat. The town of Santa Cruz de la Tenerife knows how to have a good time during carnival season; along with over-the-top feasting, dancing and song, the feathered and masked costumes alone are a sight worth seeing. Hang around until Ash Wednesday to follow the funeral procession of a giant papier-mâché sardine, whose “cremation” with fire and pyrotechnics marks the festival’s spectacular halfway point.