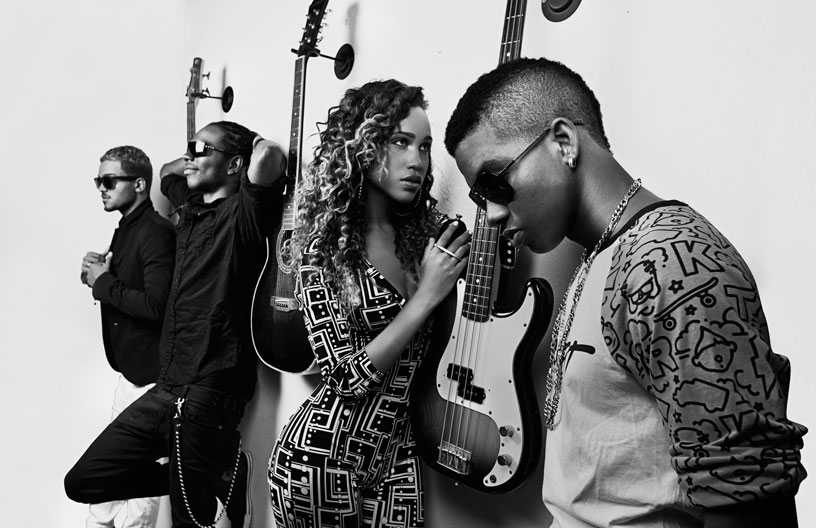 Cover Drive’s infectious, sun-licked melodies have seen the band acquire a legion of fans. The Bajan natives have already had a UK Number One single and were included on President Obama’s inaugural playlist. We caught up with lead singer Amanda Reifer, to talk about Nandos, touring and throwing band members under the tour bus!

Hi Amanda, how are you?
I’m good…I’m great actually!

You sound quite husky. You haven’t caught an English cold have you?
No, not yet! I’ve just been singing a lot, with rehearsals and stuff – so my speaking voice is suffering a little bit.

The UK tour starts November 3rd in London. What can we expect from the shows?
Oh my gosh! You can expect to have a fun, feel-good time. We’re gonna make you feel like Barbados is in London. You’re gonna think summer never ended.

The band’s dancing on-stage looks like a serious workout. Don’t you worry about pulling a muscle or doing your back in?
You know what, that crosses my mind sometimes. I can get a little crazy on-stage. One time, I decided to do a high-kick on stage because I was so into the song. I ended up kicking the microphone into my tooth (Laughs). You kinda just get into the song. You don’t think about it when you’re on-stage…I don’t think about that on stage. I worry about that stuff afterwards
.
You don’t worry until all your teeth are missing?
(Laughs) Exactly!

Why so?
He’s gonna kill me for saying this…um I’m actually throwing him under the bus. The truth is I’m the messiest! I’m pretty bad. I get distracted and leave things about the place and the boys get annoyed with me. I’m just trying to throw Jamar under the bus…it’s not working!

You’re a girl! You’ve got makeup, shoes… essentials to bring with you; you’re allowed to be little messy.
I just have so much stuff, exactly! It’s not like I’m dirty, I’m just messy. I just have my clothes about the place and my makeup on the bed…that kind of thing.

Well we’ve noticed a similarity between you and Ed Sheeran – you both love Nandos. We’ve heard you might have a Nandos black card, can you confirm?
Yes, we do – I can confirm it! That’s one of our proudest moments so far. I don’t think you understand the love affair we have with Nandos.

So, you’ve come to the UK to tour and eat all our chicken…
Yeah, touring is just an excuse really. We’re actually coming for the Nandos (Laughs).

Good excuse! You can take us if you want, we don’t mind free chicken!
Yeah, we probably could take you. You can come hang out and eat chicken. But you might not get any chicken because we’ll probably eat it all. You can have some fries if you want (Laughs).

The band has supported Rihanna… what do you make of the controversy surrounding her video, ‘Pour It Up’? Do you think it’s fair?
I think that Rihanna knows her brand and market and does what feels right as an artist. It’s something that works for her; it’s not necessarily something I see myself doing.

As a young female in the music industry, do you feel pressured to look or behave sexy?
You know what, I don’t feel pressured to do that. It’s definitely part of the industry and I can understand why people feel pressured. I just feel it’s more important to be yourself. Sexiness comes from within and being confident with yourself. I don’t feel like I have to be something else. I just try to be myself as much as possible. 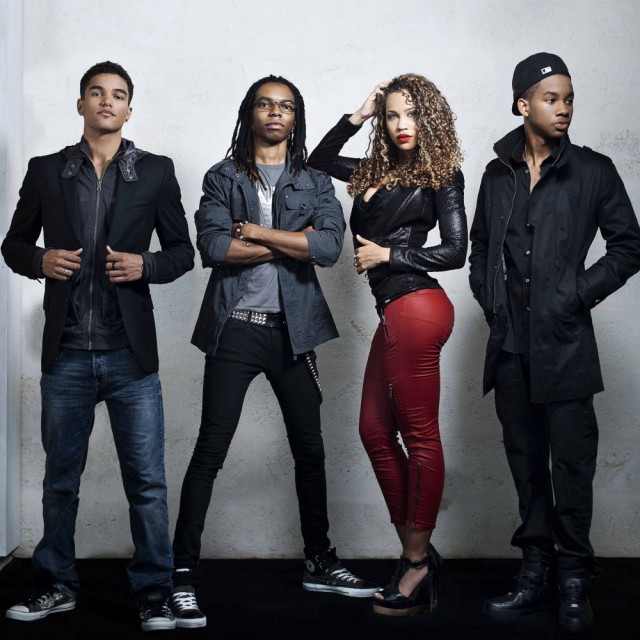 The band’s Bajan routes are evident in your music, what else inspires you musically?
Barbados is definitely a huge influence on our music, as you can tell when you listen to it. Also, our experiences; things we’ve gone through, things our friends have gone through.

The first album ‘Bajan Style’ came from four kids in a basement in Barbados. It came from an island of feel-good and having fun and that’s what we put into music. We always put what we know into our music… We’ve grown and experienced new things since then and so in the new EP we’ve incorporated some of the new experiences we’ve had and the newer feelings we’ve felt.

You mentioned the new EP ‘Limin’ in Limbo.’ Should fans expect a change in musical direction or are you sticking to Cover Drive’s winning formula?
You’ll definitely feel an evolution in the new EP. It still has that feel-good vibe but you’ll hear a more mature side. In Barbados, ‘limin’ means hanging out. Basically, it’s when you get together with your friends; you hang out, share stories and have a good time. We try to do that as much as possible with our fans, especially with the music. We want them to know what’s going on with us and want them involved with our journey.

The musical journey for this EP… obviously it still has that feel-good element, because that’s who we are. We won’t abandon that for sure – but we want our fans to be part of our journey so that involves the changes we go through. We’ve incorporated a lot more instrumentation! It’s all about growing with our fans. This is music for the fans really…

Do you still get nervous when you release new music?
Um…yeah, we do! It’s something you work on in the studio or at home – you love it and it’s like your baby. When you present it to the world and the fans, you hope they love it as much as you do! But if you think about it too hard, you’d get too nervous to put it out at all – so you can’t overthink it.  They’ll be people who like it and people who don’t but that doesn’t matter because you just make it for the fans and yourself – and that’s the most important thing.

When can fans expect the second album?
Oh my gosh! This is the question that everyone really wants to ask. I wish I could give you an exact time but we’re still working on it. This EP is part of that journey towards the second album. We know our fans really wanted new music so we put this out for them, so they can have something and feel like they are part of it. The EP will be out next month, so people can look forward to that.

So the EP’s a starter, we just need to wait for the main course…
Yeah! What we’re going through right now isn’t necessarily where we’ll end up but it’s part of the journey and we want our fans to hear that. We don’t believe in keeping it to ourselves.