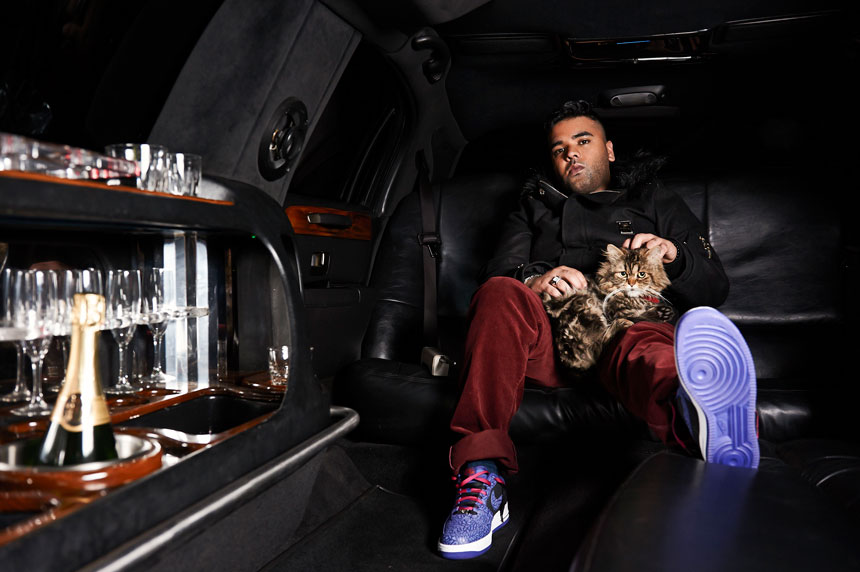 Naughty Boy has done it all! No.1 single? Check. Produced the biggest selling album of 2012/2013? Check. Appeared on Deal or No Deal? Check. The UK hit maker gave SPG the lowdown on his tour, new single and being a bad man!

Naughty Boy, hello! October’s been treating you well – you won two awards at the MOBOs. How did you feel?
To be honest…I felt a bit drunk by the second one! Apart from that, I felt amazing. I’ve watched the MOBOs my whole life – to be acknowledged by them is amazing.

Did you have an inkling you might win one?
No, not at all! There were some strong acts nominated, like Rudimental and Disclosure. So, honestly I didn’t expect it at all – which kinda made it better.

Recently, you’ve been nominated in the Breakthrough category of the YouTube Music Awards. We hate to be the bearers of bad news but you’re up against some pretty stiff competition – Kendrick Lamar, Macklemore & Ryan Lewis, Passenger and Rudimental…
Oh yeah, yeah I am! I’ve just had a look at it now and I swear I have the second most views on the award’s video page.

Who’s number one? Who poses the biggest threat?
I think Macklemore…I didn’t see anything above that.

If you don’t win, at least you’ve got your MOBOS and the best cheeks in music.
Thank you!

In fact, they may be the best cheeks the human race has ever seen. We can’t be 100% sure though…
(Laughs) That’s more than enough for me!

Previously, you mentioned that you were working on the new Britney Spears record…any further news on the track?
The record I worked on was with William Orbit. I don’t know what’s happened to it – I didn’t go to LA because my visa wasn’t done. I’m not sure if it’s made it on there but I was more excited to be working with William Orbit!

More than Britney?
Yeah, I was. I didn’t get to meet her – which is a shame.

The debut album ‘Hotel Cabana’ has done extremely well. The majority of artists featured on the album are British. As a producer, do you feel it’s important to showcase British talent?
Yeah, that was so important for my album. I wanted to make sure it felt like a British album. I’m a British producer but sometimes it would have been easier to get international artists involved. However, I just thought I want to represent all that’s exciting in the UK right now. I would say it’s the most exciting it’s ever been – from singers to producers to songs. I want to be part of that wave!

Wiz Khalifa was the only international act. It’s nice to have one but even then I put him on with Ella Eyre, who is a new and exciting British singer.

What qualities do you look for in a guest vocalist?
Do you know what? Everyone on the album is an amazing artist; not just as a singer but also as a writer. Everyone on the album, I’ve co-written the songs with. It’s not as simple as having talent in one area – I want to explore other things with them as an artist. That’s when you get the best results, like when I worked with Sam [Smith, who features on ‘La La La’].

Have any of the artists you’ve worked with surprised you in the studio?
Ella Eyre did actually. Also, Ed Sheeran – how quickly he got the concept and idea of what I wanted to do was amazing.

Will we ever get to hear your dulcet tones on a track?
Ahhh, I don’t know about that! I can sing for the purpose of making songs – that’s as far as it goes. 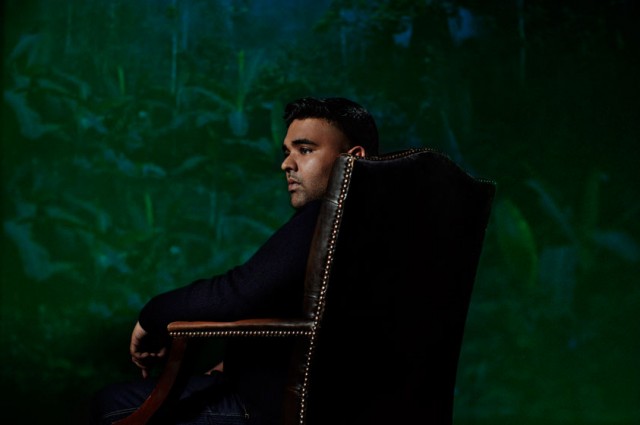 The new single ‘Think About It’ is released November 17th. The track features Wiz Khalifa and Ella Eyre. Tell us about the song…
Basically, it’s a continuation of the hotel’s story [the concept for Naughty Boy’s album]. The song is about a guy at the hotel, who doesn’t care about anyone anymore. He’s with this girl that he’s left behind and she’s telling him to think about everything, before he gets himself messed up. That’s the premise of what this hotel does to people.

Wiz Khalifa is the perfect guest for the hotel because he’s flamboyant, he’s a rapper, he’s rich and full of himself. I needed it to feel like a story, so it was amazing how he came on board and understood what I wanted.

What can we expect from the video then?
Hmm…I’ve just seen the video today. It’s coming out next week! It’s very different – I wanted each video to give you a different view of ‘Hotel Cabana.’ This one’s a bit more urban, East London and rap orientated. The video makes you think ‘Hotel Cabana’ is somewhere else now, which is what I wanna keep on doing.

You’re touring the UK in November. Describe the Naughty Boy gig experience to us in 3 words?
Okay, um…mind-blowing (Laughs), poetic and surprise-filled. That’s more than three words but that’s what I needed to say. Sorry!

I think two of those words can be spelt with hyphens…so I like that you used grammar to your advantage…
(Laughs) Excellent.

Will any of the artists you’ve worked with appear on the tour?
Yeah, there will be various surprises. I’ve got a few things I’m coming up with…I’m bringing out some guests so hopefully you guys will be impressed.

Halloween is nearly here so we want to know if you really are naughty or if it’s just a façade. Bearing that in mind, we need you to answer the following:

Have you ever eaten something in the supermarket without paying for it?
I might have had the odd penny sweet but I think that you’re allowed to try them. Imagine you buy one and it’s got liquorice in it! I try purely for the care of non-liquorice eaters out there…

When was the last time you told a lie?
I only tell lies to protect the universe! So, I tell them all the time but they’re only white lies. I might tell a girl she looks fine when she clearly doesn’t – things like that.

Well to conclude, we think you’re a certified bad-man…
Thank you, I wanted that, I need that certification. I was hoping you weren’t going to say ‘good boy.’ Thank you so much!