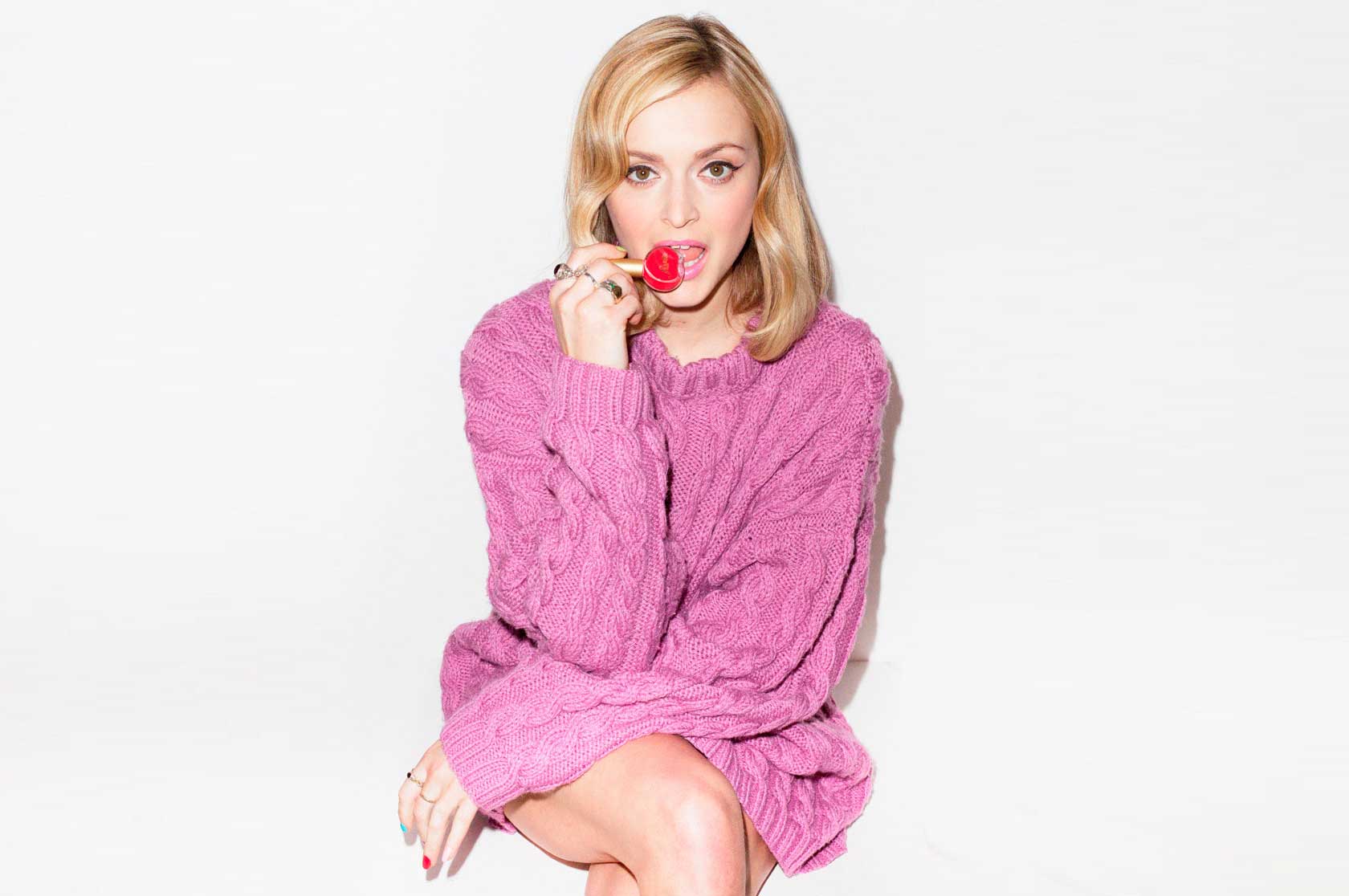 We caught up with national treasure, Fearne Cotton, who shed light on her new life with baby Rex, interviewing royalty, her highlights from the BBC Radio 1 Live Lounge and whether or not she would date Keith Lemon. You can probably guess the answer to the latter… 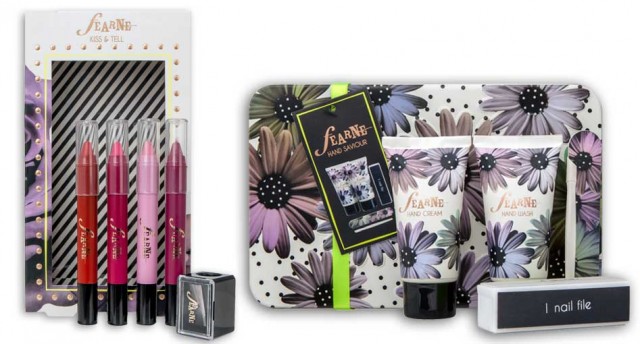 Hey Fearne, I’ve just been looking at your new collection for Boots. Can you tell us a little bit about it?
Yeah, it’s great to be doing another season! It’s basically a mix of make-up and toiletries with a beautiful design element to it using lots of black and white flowers with colour pigmentation and little gold stars. The packaging is really important to me because I love things to look pretty through and through. There are some great new bits to the make-up range, like lip crayons instead of lip sticks and eye crayons which are so much easier to use than eye liner. There’s also a really great nail art set which I’m really excited about; there’s diamonds, nail art pens and it’s just really fun to use.

Sounds good! How is baby Rex getting on?
Ah, he’s so lovely. He’s massive now; he’s nine months, crawling everywhere, grabbing and eating everything under the sun so yeah, I feel very lucky to be his mum that’s for sure.

When my brother was a baby he threw a bowl of Weetabix at my mum’s face…
Wow… Pretty hardcore. Has Rex done anything similar? I’ve got all this to come haven’t I?! He doesn’t throw things, but when I’m feeding him his lunch it will then be at that opportune moment where he sneezes and all of the food in the mouth goes flying onto me. I end up changing my outfit about a million times a day because of food abuse or puking.

Have you let any of your celebrity pals babysit? No… I am very cagey about who looks after him. The only person who is allowed to look after him is my cousin Katy, she’s his nanny. I trust her opinion more than my own sometimes! My mum babysits occasionally though.

You wouldn’t let Keith Lemon babysit, for example?
Are you mental? I’d rather leave him on his own than have Keith look after him! There’s just absolutely no way.

Moving onto the topic of Celebrity Juice, what would you say have been your top three moments?
This doesn’t necessarily mean they’ve been my favourites, but big moments! One of them would be when I’ve played a game where I was blindfolded and had to move closer and closer to a certain object. When I took my blindfold off it happened to be this old, naked man with his willy out! Another would be with Ant and Dec, where we were in a glass box having to feel a mystery object which turned out to be a naked female chef who was rather curvaceous. There’s a lot of nakedness on our show. Another would have to be the Xmas special just gone, which had a very, very messy ending to the show. Probably the messiest ending to a show we’ve ever had.

I’ve been wondering for a while now where on earth you got the naked man from?!
Well, there happens to be quite a lot of people from different agencies who don’t mind putting themselves out there. It’s mad the amount of people who will do crazy stuff when they’re facing a TV camera. I think we’ve proved that as a whole with celebrities coming on the show and doing things they would never, ever normally do. People let their guard down and forget about their usual morals. It is quite a strange environment that brings out the filth in people! 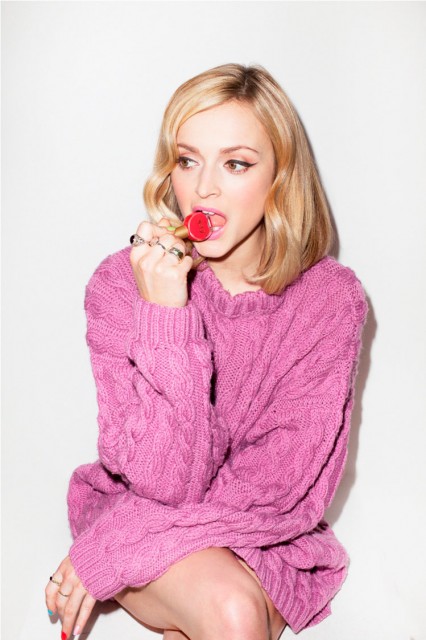 You’ve obviously had a fantastic career. Have there been any particular highlights so far? Interviewing Prince William and Harry was and still is the highlight of my career. It was about six years ago now but a real honour to be asked to do it. I felt the interview went really, really well and I’ve been lucky enough to see them since then and have a nice relationship with them in that way. They’re just wonderful guys and an absolute joy to interview. That for me is definitely one of the best things that I’ve ever got to do.

The Live Lounge has been a massive success for BBC Radio 1. What have been your highlights of the year just gone?
We had such a good year. In September we had our ‘Even More Music Month’ where we had a Live Lounge everyday and that for me was pure bliss. I came into work, skipping in, wondering what was going to happen and we had some amazing sessions during that. The Arctic Monkeys always do the most sterling job in the Live Lounge and they are absolutely sublime live. Their cover of Drake’s, ‘We’re Going Home’ is my favourite cover, ever, so that was a great moment. Kings Of Leon, who had never done a cover before until the power of the Live Lounge convinced them, did Robyn’s, ‘Dancing On My Own’, which was really quite moving.

Have you got any hot tips for 2014?
I’ve become obsessed with quite a few people recently who are dead new. I’m really besotted with an Irish singer-songwriter called Hozier. He has the most wonderful, rich voice that I’ve heard in a long, long time. There are a lot of male singer songwriters who have come out of the woodworks recently. Nick Mulvey and Vance Joy I’m also really into.

A year for the dudes?
Yeah, it’s a year for the dudes! The past few have seen real strong female artists like Emile Sande, Adele, Ellie and Florence and the Machine. It’s now time for the guys to step up and tug on the heart strings and make some amazing music. I think that’s definitely going to be 2014.

We’re a national student magazine. What advice would you give to our readers looking to build a career in the media industry, whether it’s producing, presenting or DJing?
The thing I would bear in mind is that there is absolutely no one set route to go about it. I don’t think I should be the one to say this is what you should do because everyone’s journey is so unbelievably different. Some of my great friends who are broadcasters have done it since they were kids like me whereas some got into it by accident through working as a floor manager or in a production house of a TV company. As well as being open minded you have to do everything you can to practice your skill because it is a skill and it’s one you need to hone. I don’t go into work thinking, “Right, that’s my job, let’s go”, I genuinely go in every day and think, “How can I do this better? What will I learn today?” Whether you’re practicing at home or on student radio, TV or local stuff, that’s the only way you’re going to get better at it. Words of wisdom. I hope so. I hope I can pass on a nugget or two!

Will you be attending any McBusted shows this year?
You know what, it would be wrong if I didn’t! I absolutely love those guys. I don’t know Busted as well these days but the McFly boys are really great friends of mine. I feel like we’ve been in each other’s lives in lots of seminal moments throughout our careers. I’ll always remember when they came to my 30th birthday party at my Mum’s house which was quite a drunken affair! They were loving life, having a great time and dancing with my mum and all her mates! I love them to bits and am really happy for them.

I saw on Twitter a few weeks ago that you slipped up in the middle of a restaurant. What happened?
Ah yeah! I took my team out from Radio 1 for a bit of lunch because my Assistant Producer is leaving to BBC Glasgow. So we went out and I had literally half a glass of champagne, maybe three quarters, and these days being a tired mum that will make me drunk! As I was walking out I spotted Rob Brydon in the corner and as I tried to discreetly point out he was there I did a very bizarre side skid… It was one of those moments where everyone goes silent and it really wasn’t very nice. Very bad, very awkward, and a very me moment!

Would you say you’re quite clumsy?
Oh, absolutely the worst! You’d have to talk to my boyfriend about this but I am one of the clumsiest, unintentionally loud people ever. If the baby is asleep I’d definitely drop the heaviest pot in the world which will wake him up. I don’t know what’s wrong with me.

I have one final question from the guys in the office… If you and you’re partner Jesse weren’t to be, would you consider dating Keith Lemon?
In a very simple, short answer, no. A big, fat no. He is the worst boyfriend material, EVER! Absolutely the opposite of the guy that I like.