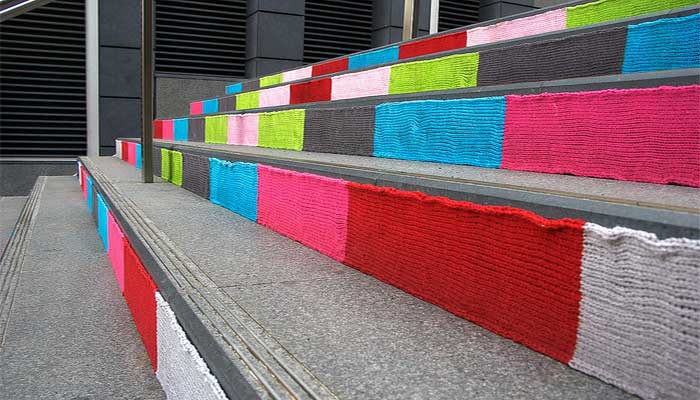 If you think stamp collecting is a little weird, wait till you see this collection of odd hobbies…

Urban knitting or “yarnstorming” is a guerrilla art form focussed on adorning objects, such as phone boxes and statues, with wool graffiti. According to underground knitting collective, Knit the Street, “[yarnstorming] is a street art that harks back to the woolly stereotype of grandmas, itchy jumpers, ill-fitting socks and nice cups of tea by the fire, takes it by the blue rinse and drags it kicking and screaming into the street to blanket a bollard in beasts, swathe a signpost with stitched silliness, or cover a corner in wild woolly creatures.”

Although still technically illegal, it is difficult to view the soft and cuddly creations of “yarnstormers” as criminal acts. However, members of guerrilla knitting movements, such as Knit the Street, still hide their identities and document their woolly terrorism under various pseudonyms.

Ever felt like your favourite cuddly bear needed to see more of the world, now it can! All you have to do is register online at toyvoyagers.com, create your toy a travel profile, get a toy voyager ID and send it to a random person’s house somewhere else in the world. It is also possible for you to host someone else’s toy, show it the sights of your local town or city, take lots of pictures and send them to the toy’s owner so they can see what a great time their toy had whilst on its travels.

The term “Cosplay” comes from the combination of the words “costume” and “play”. Originally coined in the mid 90’s, it is used to describe the hobby in which people wear costumes of various characters from Japanese animation and comics. However, “Cosplay” is far much more than simply dressing up, for those who have a serious passion for the fad; it is a way of life. “Cosplayers” deeply research the characters that they wish to play, they copy their signature poses, learn their phrases and even go as far as to be in a “relationship” with other characters to accurately mimic a cartoon or comic strip.

Although it is understandable for a dog owner to give their canine friend a haircut every now and then, it is a little difficult to see the logic behind the new extreme dog grooming trend which is becoming increasingly fashionable in China. This unusual hobby has seen Chinese people giving their pets much more than just a shampoo and trim, with dogs throughout the country being dyed and styled to look like various people, animals and cartoon characters. So popular is the bizarre past-time that money spent on pets throughout the nation has seen a 500 per cent increase since 1999!

Yes, you read correctly, there really are people out there who collect airsick bags. The hobby is actually reasonably easy to get involved in. You simply buy yourself a plane ticket, claim your free airsick bag and then upload pictures of your new collection to the online virtual museum.