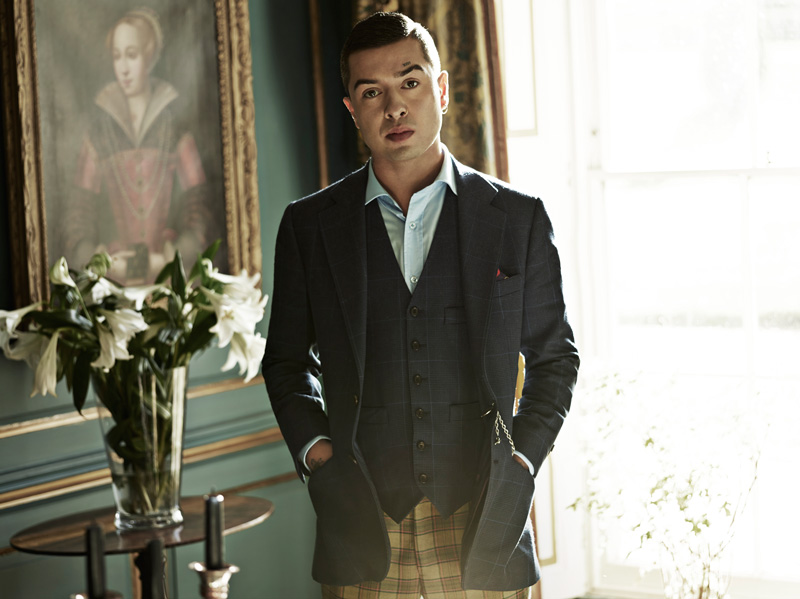 This particular music maestro doesn’t want to tread in the monotonous footsteps of other artists; he would rather walk his own path. After being in band ‘The King Blues’ for nearly a decade, he has decided to break away and focus on his own individual style of music. We chat to iTCH about his influences, his new album and what it’s like to tour with Dan Le Sac & Scroobius Pip.

Not too bad thanks. What have you been up to today?

Today I drove down from Glasgow to Newcastle. So, it’s just been a driving day.

Your new album is entitled the ‘Deep End’; can you tell me the reason behind the name of the album?

I think there are a couple of reasons really. Initially, I think it’s because I’m kind of throwing myself into the deep end. I’ve been in a band for many years before and it got to a point where we were getting a fair bit of success, but I decided to call it quits and do something else. For me, it is throwing myself in the deep end and saying, “Look this thing is good for me; this is what I want to do”.

I don’t really have a safety net. I decided to cut all my ties, you know, all my safeties. And, I decided to dive right on in. The “deep end” also refers to the fact that I think the lyrics on the record are a lot deeper compared to anything I’ve ever done in the past.

You were with The King Blues for years; how does it feel going solo after being in a band for so long?

Live we were a six piece band, but really we weren’t a six piece band. It was really various people playing live with us. This is kind of the same. I write the records in the studio, I have a band when I play live. So, it’s not really that different. Logistically I just feel I have the freedom now to do what I want. I was kind of bored of making the same kind of music after ten years of doing it. I needed a change. I’m a different person after ten years than I was initially going into it. I felt like I wanted to do something different, and I’m enjoying myself, certainly a lot more now than I was towards the end of that band’s life.

You don’t really fall into a particular genre; can you explain the influence behind your diverse musical style?

How was touring America? I heard you had an accident before going out there…

I broke my leg at a gig in Camden just before going out to the states.  I did three months in the U.S in a wheelchair.

Amazing. The main thing for me was that nobody knew who The King Blues were out there. So, I could just focus entirely on my own thing.

A lot of them had never heard someone from the U.K rap before. And, hip-hop is such a huge part of their culture, it’s so engrained in them, they really get it. So, they were really open-minded to what I was doing.

It was so much fun. I got to play cities like New York, Detroit and Chicago. You know, real hip-hop towns. Getting loved there was a real honour.

It’s been amazing. I’ve wanted to tour with them for a long time. We’ve been friends for years and we’ve collaborated many times on different things. We’ve played together here and there but our schedule has never allowed us to tour together before. So, it’s something that has been on the cards for a long time. The tour has been sold out every night. It’s a different crowd than what I’m used to. They’re not running around hitting each other. It’s more of an older crowd who are a bit more laid back. But it’s really cool, I’m absolutely loving it.

You’ve had some pretty big names remix your tracks. How does that feel for you?

To me it’s amazing to get people want to work with me who really know their stuff. To have people like Bare Noize remix my tracks is a really amazing feeling. I’m just really enjoying making new music. I don’t ever want to follow any scene, any fashion or any trend. I want to define the future, not follow it.

You recently sold a one-off track online. Wherein you wrote and recorded a track for a fan, based around a subject of their choice. How did the idea come about?

I just thought it would be quite a fun thing to do. I had a week off, which is such a rarity, and I was like, “I don’t know what do when I’m not hustling and working”. Everyone said I should take some time to chill and that wasn’t really me. So, I kind of decided it would be a cool thing which I could do in my studio at home.

You could be a business man with all that industrious thinking. Is music always the thing you wanted to do?

Literally it’s always been the thing I’ve wanted to do. You know when some people are young they want to grow up to be a fireman or footballer; I’ve always wanted to be in a band and make music. I’ve never had another job in my life. This is the only job I know, it’s the only trade I know. It’s everything for me. There is no plan-b, there is no fallback. I’ve been in the industry for a long time now. I believe if you really desire something and picture it in your mind, eventually you will find a way to make it happen.

Lastly, what can we expect to see in the future from iTCH?

My albums coming out at the end of March and I’m really excited about that. I’ve been working on it for a long time. I’ve been in a studio in LA for six months. Most bands get a couple of weeks to make their album. I’ve had the luxury of being in there for six months.

We’ve been sitting on it, kicking it about and getting it just perfect, and now it’s finally ready. After the release I will just be doing a lot more touring. I’ll be touring the U.K, and then going to the U.S. Both a West Coast and an East Coast tour. Then I’ll be coming back to do a few more dates in the U.K!

It’s been a pleasure to speak to you. Cheers.

Thank you very much bruv. All the best!