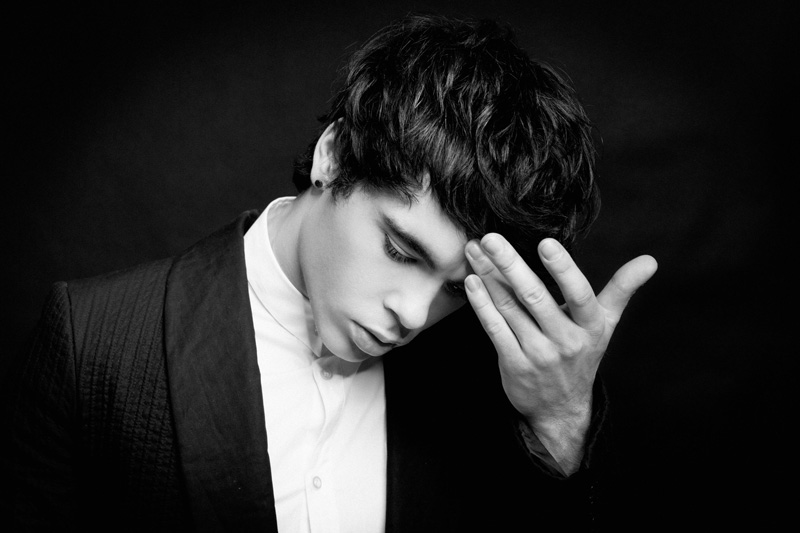 Leon Else is set to be the name on everybody’s lips for 2014! Hailing from Margate, the singer’s broody and atmospheric sound has attracted critical acclaim from MTV and BBC Radio 1. The fashion world is also singing Leon’s praises; with GQ Magazine UK naming him the most stylish man at Milan Fashion Week.

SPG caught up with Leon for a Q&A about his debut album, fashion faux pas and future fashion line!

Protocol is out now! Can you explain what it’s about for the uninitiated?

Protocol is ultimately about friends with benefits; an agreement that two people have only a sexual relationship and nothing more. The girl becomes too involved and gets more attached and she wants to tell him – she falls for him and he knows it but doesn’t want to hear it. He is more like ‘if you can’t stick to the agreement then leave.’ There is also the underlying issue that maybe the guy deep down does want more but finds it hard to open up about his feelings. He is incapable of loving and letting someone in – he’s scared! They both actually feel the same, but that’s not the protocol…

Did you write the song about anyone in particular?

Yes, the song is written about personal experience.

The vocals on the record are extremely soulful – which artists inspire you vocally?

There’s quite a lot of hype surrounding you at the moment. Have you been surprised by the public’s response?

Yeah, I am. I guess you don’t expect anything, that way it’s always a surprise! I just don’t want to get my head into the hype; I just want to stay focused and write songs but I’m definitely more than grateful. I hope it continues, so thanks to everyone who has shown support!

You’ve also caught the eye of the fashion industry. Do you think fashion is an integral part of being an artist?

I have been very lucky with the fashion industry. I love fashion and have always had a real interest in it. I don’t know if fashion is an integral part of being an artist but it is for me. I want to be in that world too. I love most things that are creative! I love to express myself without saying a word and fashion allows you to do that.

Artists like Kanye West are branching out into creating their own fashion lines – is this something you’d consider?

Kanye West is an example of how you can! I absolutely want to do this. I have always wanted to have my own line and collaborate with a fashion house. It’s funny, I already have the name of my line and I’ve already written the music to accompany the brand, shows and campaigns. Also, I have a few ideas on who I would love to collaborate with. This is something that is definitely in my mind – so 100% yes!

We’re pretty sure even you have had some fashion faux pas. What’s the worst thing you’ve ever worn?

You know what? I wrote out an answer for you and then I deleted it. I don’t actually believe in fashion faux pas because at the time when you wore it you liked it or there was a reason why you did. Looking back you may go ‘OMG what was I thinking!?’, but that is because you are no longer in that time space. So, I will own everything I have worn – if somebody else wants to call it a faux pas then that’s their opinion but only their opinion. I’m sure lots of people could pick out things and go ‘yuk.’ However, I’ll look back and go ‘oh, I remember that time, I thought I was so cool in that at the time.’

Have you decided which single you will release next? If so, when can we expect it?

We are literally down to three songs to pick from and will be decided by the end of next week. They are all great, it’s more about what vibe I want to go with next. I’m so excited though because it will not be what anyone expects from me at the moment. I like keeping people on their toes and when they put me in a box, I just want to break out of it! I’m thinking [the second single will be released] end of April. I can’t wait to do another video and I can’t wait to give more music to my supporters; who have been so amazing and loyal!

You’ve been working on the album for a while – what can we expect from it?

Until your album is actually out, as a songwriter you will always be working on it. It’s a nightmare really! I would say expect nothing because I don’t want to disappoint people, or do something that they don’t want because of what I’ve said.

However, I will say to expect something honest, truthful and something personal, that will entertain and hopefully appeal to a wide range of people. [The album] will have a journey that people can relate too.

Protocol is available now from iTunes and Amazon.