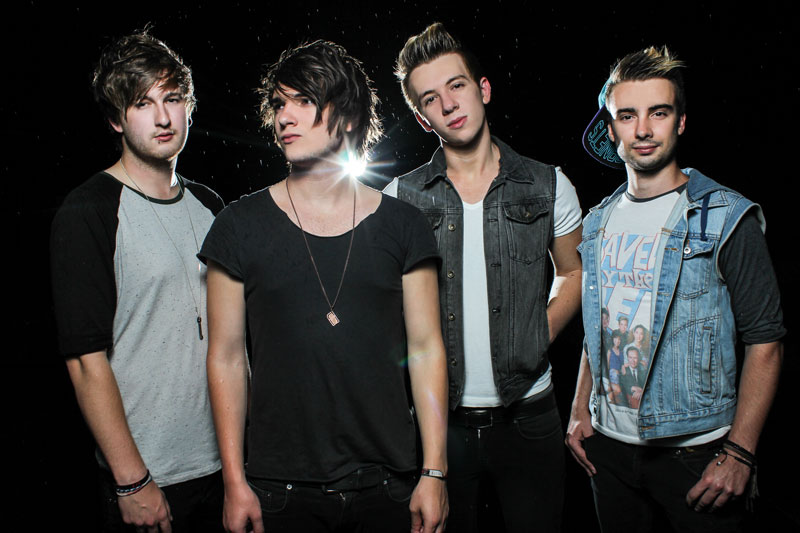 2014 looks like it will be pretty busy for North London’s Room 94. The band are about to embark on their biggest headline tour yet! Following that, they will release their eagerly anticipated debut album ‘No Strings Attached’ March 10th. Girls prepare to swoon – we spoke to guitarist Sean Lemon who dished the dirt on the new album, the tour and why he prefers Lawson over Union J!

‘No Strings Attached’ [the band’s debut studio album] is released March 10th, have you played the album to your family or friends yet?

Yeah, yeah we have!

What was the verdict, what did your Mum say?

Oh Mom loved it! She’s biased though, she’s always gonna love whatever we do.

The actual reaction from all our friends and stuff was just like, “whoa”! It wasn’t the usual [reaction] when you play songs to them and they go, “oh that’s good”. It was like a genuine, “wow, you guys have really stepped it up”.

What is your favourite track on the album?

We bet you can do that as well!

Ah yeah, I probably could to be honest. At the minute, I really enjoy a song called ‘Kiss Me Like You Mean It’.

When we were in the studio, we wanted it to have an R&B kind of feel to it. It’s got a cool drum beat going on and it’s just a really catchy song that’s fun to play live. When I’m playing guitar I love to just jam out and I can on that song.

So, does it give you chance to show off?

Yeah, (laughs) any chance to show off!

As a band, did you have any conflict in regards to what you wanted on the record?

No, not really. Me, Kieran and Dean live at home, so when Kieran came up with loads of ideas for songs, we would hear them throughout the day. We’d all come together and Kieran would say, “I’ve got this idea”, and the cool thing is we were all on the same wavelength. Kieran would say an idea and everyone would go, “that’s quite cool, why don’t we try doing this”. There was never really any conflict which is nice because some bands have that ‘we wanna do a rock song’ and someone might disagree. However, we all listen to the same music and spend so much time together so it just works.

So there was nobody acting like Thom Yorke, wanting to make an obscure ambient jazz record or anything?

(Laughs) No, not yet. Maybe on the second album!

Why do you feel Red Triangle [production/songwriting duo who have worked with The Saturdays, One Direction and Conor Maynard] were the perfect people to help you create the record?

We’ve known those guys for a few years now; they’ve worked on all our previous records. They’re really kicking off at the minute in their own right – they’ve done the Little Mix album, they’re doing Conor Maynard, so they’re getting into the poppy side of things.

We went down there [to the studio] and had the songs but their aim was to bring new elements that we hadn’t thought of before – like the poppier side of things. Because they’re songwriters as well, it really helped shape some of the songs. Rather than our four minds going “this is what the songs are gonna sound like”. It’s nice to have two professional guys say, “why don’t you try doing this it might bring the chorus to life”.

You’re embarking on your biggest headline tour in February/March. What surprises do you have in-store for long-term fans?

Um…I’ve been working on that today! We’re obviously playing the new album which is gonna be new for us as a band. We’ll get to play new songs rather than the same songs we’ve been playing for the past few years. [Fans] are gonna get to hear a completely new set which is always good! The stage show itself is looking pretty intense, I don’t wanna give anything away but there’s gonna be cool lights and stuff to look at.

You’ve supported the likes of Union J and Lawson. Be honest, who were the best tour buddies?

Sometimes you have to answer these things…

Yeah, I know. They were two completely different tours. For me, I really get on with Andy in Lawson and Ryan. I suppose on the Lawson tour we had a few more nights out.

That’s because they don’t have any children that we know of [unlike Union J’s JJ Hamblett, whose girlfriend recently gave birth].

(Laughs) Yeah, that we know of!

Looking at the band’s Twitter, you are really interactive with your fans. However, what’s the oddest thing a fan has done on tour?

We don’t really get anything too weird. We always get given lemons because obviously our surname is Lemon. We just started a fan mail and we collected it the other day and the postman was like, “I think there’s fruit in here”. That’s a bit weird, but quite funny. We usually just get sweet presents, like they draw pictures of us, some of the pictures are quite funny because they look nothing like us, but we don’t get anything too strange!

Lastly, we just want to ask why are you so bloody popular in Poland?

I don’t know! We just had a really strong connection with the fans over there. I think it’s because a lot of bands don’t have the opportunity to go over there. One day, we just randomly went, “screw it let’s go over”. I think because we made the effort, and started playing shows it just caught on and it just built and built from there! Yeah we just love going there!

Tickets are on sale now priced £8 / £25 VIP regionally and £10 / £30 VIP in London (all tickets subject to per-ticket charge plus order processing fee) from Livenation or Ticketmaster.

Full tour dates can be found below.