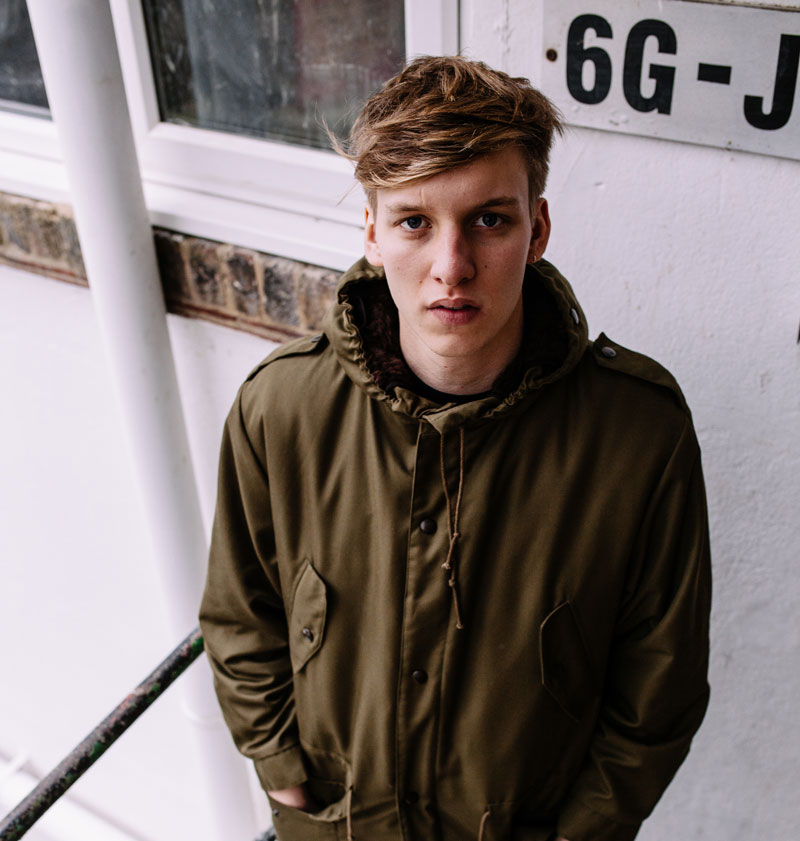 George Ezra is a young artist who has virtually appeared from nowhere. His blues infused songs have already seen him gain a large fan base. Some of whom will be extremely dissapointed considering his current national tour is completely sold out! We chat to George about his love of travelling to gigs on trains, the music scene in Bristol and the concept behind the recent video for his single ‘Cassy O’…

It’s a really strange one. I appreciate it massively, and I was so happy that I came 5th. You know what I mean? I think it puts my name in people’s heads without there been ridiculous pressure on me. It was lovely meeting everyone that put me forward, but it got to the point where a few journalists were treating it as a competition. I didn’t like that side of it. But yeah, it’s really good!

I agree it shouldn’t be turned in to a competition. It puts unnecessary stress on the artists involved…

Yeah exactly, it’s more about just saying; amongst other people we’re supporting these acts, and we’re giving some relatively smaller acts the chance to be more heard. That’s the basis of it and that’s brilliant.

You have an underlying blues sound to your records. Are there any particular blues artists that have influenced your musical style?

Yeah massively, I grew up listening to a lot of blues, people like Lead Belly, Son House, Howlin’ Wolf and Robert Johnson. There was a lot of different music I was listening to whilst I was growing up, I guess that stuff just stuck with me.

Even though you have a real blues element in your songs, they seem quite upbeat vocally…

I suppose that’s just because I’m quite a happy person. I guess it’s just who I am. Also, I quite love what Lou Reed used to do – morbid songs with happy melodies.

You managed to get a set on Glastonbury’s Introducing stage quite early in your career, how was that?

Yeah, it was amazing. I played on the Sunday which was nice. I guess everyone was feeling a bit… well, hung-over. So, everyone was quite relaxed for my set. Yeah, brilliant gig!

The crowd who came to watch me were really supportive; there was a nice atmosphere in the tent.

You’re currently on quite a busy headline tour, how’s it going so far?

Yeah, really good. I’ve just got to the venue in Liverpool, it’s lovely, it’s a really nice venue tonight. It’s been going really well, and it’s interesting because a lot of people are coming of the strength of 3 or 4 songs that they’ve heard. But, I’m doing a 40 minute set, and everyone seems to be on my side at the moment, so it’s nice.

I used to do all my touring on trains by myself. Now I’ve got a little team behind me, I’ve got my sister on tour with me, she looks after all the merchandise and that sort of thing. I’ve got a tour manager, and I’ve got my soundman – who is Action Man! It’s brilliant to have him around because it means the sound is consistent. It sounds how you want it to sound…

Did you enjoy getting around on trains before?

Lots of train pasties I imagine…

I think I’m going to have to give a shout out to First Great Western on the album sleeve, because I literally lived on their trains!

Your tour is also completely sold out, what has the support been like in the different towns?

Well it’s just me and a guitar. So, I think people have been brilliant with jumping on board early. They’re quite relaxed gigs as well, as in the atmosphere. I like to meet people after the gigs as well. Yeah, it’s been going really well.

What kind of venue do you think most suits your music?

I’ve done quite a few gigs in churches. Surprisingly it sounds quite nice in them. It’s lovely as well, they get all the candles out, and the audience is all sat down. I love that.

I’ve always liked the idea of doing a gig in an aquarium. But I don’t know whether there would be any laws about loud sounds around the fish. I thought it might be quite nice to do it as an album launch though.

You’ve just released the video for your single ‘Cassy O’; what is the concept behind the video?

The whole point was to get as many Os, circle shapes, in one video.

There are quite a few attractive girls in the video…

[Laughs] Yeah, that was brilliant. It was a nice touch to meet them as well…

You went to university in Bristol for a while, how was that?

I went to BIMM for a year. I grew up in a place called Hertford and then moved to Bristol for university, but I just did one year then dropped out.

Was that because of what you were doing with your music?

Yeah, things started to move on, and it was a case of – I was either going to jeopardise my studies or my performance.

When you were a student what did you spend most of your student loan on?

Are there any particular artists from Bristol you think we should be watching this year? Kind of like your own sound poll 2014…

My old flatmate, he goes under the name New Palace Talkies. His music has a really nice band sound and is really fun. There’s also a band called the Evil Twin who are great. Two of the lads in the band are from Leeds, and some of them are from Cornwall, but they met in Bristol. They’re definitely worth checking out.

One last random question; if you could have any superhero power, what would it be?

I think I would probably be invisible. I don’t know what I would do with it though. Probably just experiment with what I could get away with…

Thanks George, it’s been a pleasure.

Thank you, have a good day!