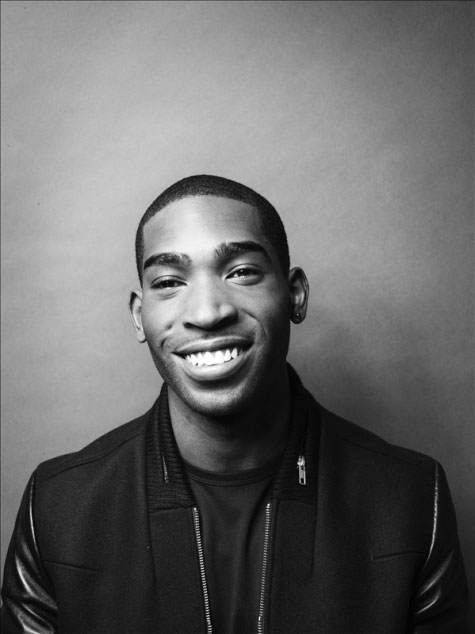 Tinie Tempah has come a long way since his early days on Channel AKA. The London MC’s second album ‘Demonstration’ reached #3 in the charts and has already spawned three hit singles! However, Tinie isn’t content with just spearheading British Rap – he has his own clothing line, record label and even an app! Inspired – SPG decided to meet Tinie to shoot the breeze.

‘Demonstration’ has been out since November. How have fans reacted to the record?

Good, it’s been really good so far. I’m really happy – with this one it was definitely more of a musical and mature record. As a Rapper, I wanted to come from the UK and make something that I felt showed off more of my talent as an actual Artist. I feel that people have reacted to that pretty well – we’re on the third single now, which is great. It feels like good things have come from this so I’m really happy.

‘Lover Not A Fighter’ is the third single to be released from the album. The track features your long-term collaborator Labrinth. Why do you think your work together so well?

I don’t know! When you look at loads of Artists there will always be somebody who they have really good chemistry with – you could arguably say when Beyoncé and Jay-Z get together, even though their married. I’m not necessarily married to Labrinth but something good always comes from us working together. Me and Lab met each other around the time of ‘Pass Out’ [Tinie’s first #1 Single], that was actually the first thing we did together and we had a clear objective which was to go against everything else in the charts at that time.

(Laughs) Yeah! If you want to call it that…it definitely just feels like that objective remained the same throughout all of our encounters, so I guess that’s why it works so well because we have a clear understanding of what we want out of each other.

The album features a lot of collaborations – is it important for you to work with other artists?

Not necessarily, I feel like there’s certain times and projects where that could be an important thing. This is the second album so I wanted to show people what I could do and how I could put things together. As much as I’m an artist, I consider myself quite a creative too. I just wanted to show people that I could put together ‘real music’ music and not just music for the club or for young people – that I can make music across the board.

‘Moshpit’ features Dizzee Rascal, who you’ve cited as one of your musical heroes. Did working with him live up to your expectations?

Of course! It was amazing working with Dizzee; he’s somebody I’ve been listening to since I was about 12/13 years old. To finally be in the situation to work with him was great. I think we were able to make something pretty incredible, if you ask me. It was a big thing and it’s definitely something to tick off my bucket list.

Were you surprised ‘The Fifth’ [Dizzee’s most recent album] was not as commercially successfull as his previous album?

Um…to be quite honest with you, it’s a really different time in music – everybody’s listening to music in so many different ways, whether that is streaming or downloading or whatever. Everything’s really changed and I think people go through music more quickly.

I wouldn’t say that I was surprised, as a lot of people have released records that aren’t doing as well as their previous records. But it is a different time and it doesn’t take away from the message of the music or the show. I’m sure Dizzee’s going to have an amazing summer and do some amazing shows.

You’re touring throughout the UK in March/April. What do you have up your sleeve for the tour?

We’re trying to do something we haven’t ever done before – especially with the set. Anyone who knows me or has seen me live will know that I always make the energy 110%. It’s always crazy and all the way to the top!

We’re basically going to put the best of the old music combined with the best of the new music. Also, we’re going to use all the crazy records I did in-between like ‘Drinking From The Bottle,’ ‘RIP’ and ‘Earthquake.’ We’re going to mash them all together and make it a fun-filled, pure energetic show.

I’ve got my new band and a new set design which fits with the Demonstration album so it’s gonna be crazy. I’ve been itching for this, so everybody needs to get out there and see it for themselves.

Out of the new tracks, which are you most excited for fans to hear live?

It’s also going to be great to play some of the more emotional songs too, which are some of the most emotional yet. ‘Tears Run Dry’ is a very honest record and I’m going to put that together in quite a classical way. I can’t wait for people to see me in a concept they haven’t really seen me in yet. I like to think that everyone knows when songs like ‘Pass Out’ and ‘Trampoline’ are played, there’s going to a lot of jumping and bouncing around. But I want to create other moments in the set – songs like ‘Tears Run Dry’ and ‘Heroes’ [which features Laura Mvula] are more classical and slow so I can’t wait for people to see how I perform those.

‘Disturbing London’ [Tinie’s lifestyle brand] boasts a clothing line. What can we expect from your designs this year?

We’ve just brought a collection out! If you go on www.distrubinglondon.com, you’ll see all of the collection on there. We’ve just collaborated with Lavenham, who are a British jacket company that make quilted jackets. We made two amazing jackets with them, which are pretty cool. Also, we’ve made snapbacks with Mitchell & Ness. The collection has a lot of essential wear, so things like tracksuits and we have this really amazing long white t-shirt which is simple and classic but it has the perfect fit.

The company’s going well – we’re doing it independently and it’s very organic. We collaborate with a lot of people, similar to the way I approach music and that keep its fun and exciting. I’ve been wearing some of it and we’re just keeping it going, that’s why we’re always at the fashion shows.

You’re not the only rapper with a clothing collection. What did you make of Kanye West’s recent collection with A.P.C.? Do you feel he jacked the designs of other fashion houses?

No – Kanye is a very innovative person. I feel like no idea is original – all clothing comes from somewhere, it’s either a t-shirt or a jacket or a pair of jeans. It’s about your spin on it and what you add to it. I think whoever Kanye collaborates with he’s able to do that successfully.  So, I’m a Kanye fan and I can’t say anything bad about him.

‘Disturbing London’ also features a team of artists, songwriters and producers. Who is the ‘one to watch’ from the collective?

Sasha Keable is on her way already! She’s supporting Katy B on tour which is amazing, so you can catch her there. Also, she’s just been on the road with Disclosure and she featured on their track ‘Voices.’ Sasha very much fits into what’s going on now, so I think people will like her.