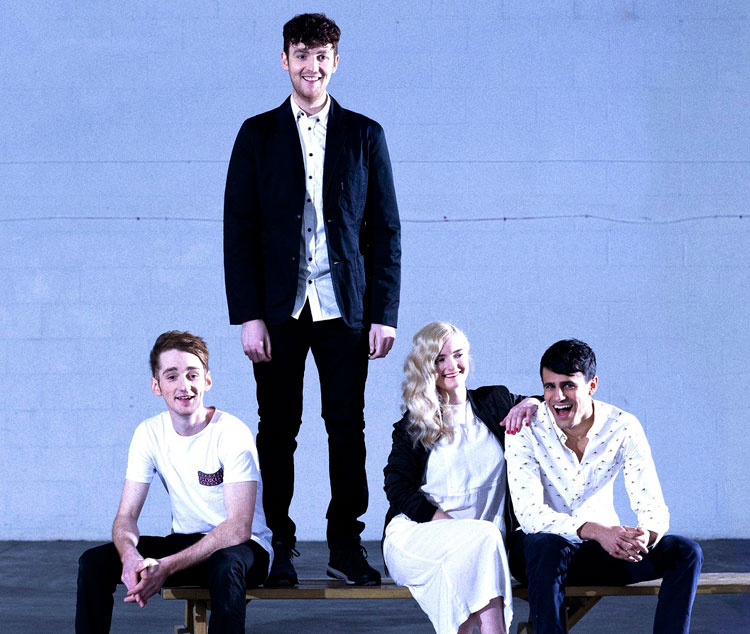 The UK dance scene has experienced a recent revival, with artists like Disclosure and Rudimental dominating the charts. However, Clean Bandit are the name on everybody’s lips for 2014. The band’s combination of bashful basslines and emotive strings has already won a legion of fans, with single ‘Rather Be’ selling 800,000 copies in the UK alone! We caught up with violinist Neil to discuss their upcoming tour, debut album and being completely unaware of Joey Essex.

Debut album [‘New Eyes’] is out June 2nd. Are you feeling nervous about its release? I think we’re more excited than nervous. It’s been such a long time in the making that it’ll be a relief to finally put it out there, and see what people make of it. We’ve been lucky with the reaction to our music so far. Hopefully, the album will go down as well as our previous singles!

The band’s Jack Patterson [bass/sax/deck] has produced the record. Has he been cracking the whip? Yeah, he’s a TOTAL slave driver! No, in the last few months of finishing it there were a lot of people around us cracking the whip, but that is probably the only way you are ever forced to declare something finished. Otherwise, you just keep tinkering with bits and pieces and it’s never-ending. I think we’re very happy with it now.

The singles you’ve released so far have been quite diverse. So, will anything surprise us on the album? I really hope there will be some surprises in there! We work with different vocalists on every song, so each track takes on a completely different feel. For example, we worked on a song with the reggae singer Stylo G and the Jamaican influences in the instrumental are pretty obvious.

‘Extraordinary’ [the band’s new single] features up-and-coming talent Shana Bass. Have you received any pressure to use more famous collaborators? Not so far…but we are applying as much pressure as possible, to secure more famous collaborators (laughs). We would love to do something with Woodkid or Drake one day. Oh, and anything with Sean Paul would be a total dream.

You direct your own music videos. As a band, is it important to have control over your visuals? It’s really important for us to keep that control. We try and see each project as a whole – the video and music having equal importance. I think Jack would find it impossible to relinquish control over either!

They’re almost like a window to other parts of the world. Is that influenced by the music? For sure, but I guess the relationship can go both ways. Sometimes a video idea will influence the music as well, which is what happened with our song UK Shanty [which stars model Lily Cole]. We wanted to make this sea-inspired video, with a kind of ethereal mermaid character, and so the song followed from that concept.

The album will be released after the tour – are you worried about playing songs before people have become familiar with them? Obviously, it would be cool to do the tour once everyone has had a chance to listen to the album. However, there’s also a lot of the music out there already. Hopefully, people will know plenty of the material, but tracks they haven’t heard before will still have a distinctive Clean Bandit personality about them. Either way, playing live is always an amazing experience for us, which never gets boring!

You’re known for your use of guest vocalists. How will that work live? Will you be bringing some people on the road? We actually have two brilliant singers [Florence Rawlings and Elisabeth Troy] who front our live show. They cover the whole of our repertoire between them. We might also bring out the occasional guest vocalist from the album, but those appearances will be top secret…

This summer, the band will be playing loads of festivals. Which one are you most looking forward to? Glastonbury – there’s so much to see, and it’s the only festival that truly doesn’t stop all night long, so I can’t wait to be there again.

What has been the highlight of the last year; achieving your first UK #1, completing your last headline tour or featuring on Joey Essex’s compilation CD? Is Joey Essex actually a person? I didn’t know about that, so I guess that rules that one out! I think getting the #1 because it’s something, as a kid, you imagine only happens to other people.