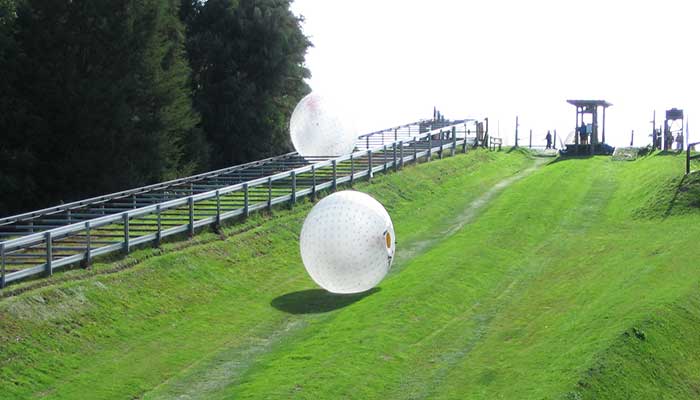 One of the best things about being a student is all the free time you have. Apart from the essays, lectures, seminars, revising for exams, taking exams and drinking to forget about aforesaid exams. But even taking that into account, you should still have a couple of hours free each week. With that in mind, and the constant battle against MOOBS, The SPG has tracked down 5 sports that you have just GOT to try….

Wait, WHAT? Over the last few years, Mexican wrestling, or Lucha Libre (literally translated as “free-fight”) has taken the UK indie scene by storm!

If you thought wrestling was just a bunch of fat blokes in tight underpants, be prepared to think again! Mexican wrestling is a dramatic combination of high flying aerial moves and bone-crushing submission holds. Mix in some crazy outfits and some of the best cardio-vascular and flexibility training there is, you’ll be power-bombing the fat away in no time!

Bumps and bruises can be common in training. After all, you will be learning some pretty tricky moves – so it’s worth while doing your research and finding a wrestling school that has a good reputation, patient coaches, and most of all, decent safety mats!

Wait, WHAT? To sum it up bluntly, Brazilian funk dancing for self defence. Capoeira uses music, rhythm and dance moves to focus on kicking people in the head (seriously, why isn’t this in the Olympics)!

Capoeira doesn’t need any fancy equipment or complicated uniforms, another plus for the budget conscious student. There are some things you might want to pick up later, but when starting off, basic gym kit is fine.

Apart from fitness and self defence, Capoeira also looks REALLY COOL and the dance type moves are great on a night out. I’d love to see a tennis player try to impress a girl at a club by pulling out his racket.

Some of the moves can be difficult at first so make sure you warm up properly with some deep stretching.

Get involved: Most universities will have a Capoeira society kicking around somewhere (pun intended). If your uni doesn’t have one, then I don’t know, Google it or something?

Wait, WHAT? Remember when you were little, and you first saw a hamster running around in a big plastic ball and thought to yourself “You know what, that looks like fun!” Well today is your lucky day.

In a nutshell (or giant plastic ball as the case may be), Zorbing involves being placed in a massive plastic ball and rolling down a hill. In order to…ummm…Well, not sure to be honest.

Frankly, The SPG is not sure what the point of this is. But to be fair, if it involves rolling down a hill, pretending to be a hamster then honestly, does it really need one? What kind of society do we live in where something as magical as this requires any justification, other than the fact that it’s awesome?

Unlike a hamster ball, a Zorbing ball is made of bouncy flexible plastic, so that you don’t break your neck rolling down aforementioned massive hill and you should arrive perfectly safely (if a little dizzy and with messed up hair) at the bottom.

Get involved: A big plastic ball and a grassy hill aren’t things you can just keep in a student house next to the takeaway menus and the dodgy Henry Hoover your landlord left you. http://www.zorbing.co.uk/

You know what this is. Don’t pretend that you don’t. Quidditch is a sport made up by JK Rowling for her cash cow/boy wizard Harry Potter which involves beaters, chasers (a magical goalie I think as well) all of whom ride around pointlessly until Harry can find the magical flying ping-pong ball and save the day!

Seriously, the Snitch is worth 150 points! A normal goal is only worth 10. A team would be far better off just standing in front of their own goals and hoping their Seeker finds Snitch first.

Real-life quidditch (as well as being somewhat of an oxymoron) is a lot less magical, but a lot more well balanced as a sport. To quote the IQA (International Quidditch Association): “Quidditch is a co-ed contact sport with a unique mix of elements from rugby, dodgeball, and tag. A quidditch team is made up of seven athletes who play with brooms between their legs at all times.”

Most students probably don’t own a broom, let alone know where it is. However, we have to admit, it does sound like a lot of fun!

Get Involved: The IQA has some great resources on finding a team nearby. Or raid your mum’s cleaning cupboard and start your own! http://iqaquidditch.com/get-involved/find-a-team

It doesn’t matter if you have 5 A*grades at A-level, an unconditional offer at Oxford or have a UCAS statement more beautiful than One Direction. You are not a student until you have played Ultimate Frisbee. End of.

With a massive range of brands, types and sizes, they all boil down to more or less the same thing. It’s a disk. You throw it. Someone else catches it and throws it back. You can make it more complicated if you like, but that’s about it.

Ultimate frisbee is quite simply the definitive student sport. You don’t need any fancy gear other than a frisbee and hands. But to be fair, dogs can play this as well, so you don’t’ even need that.

Get Involved:  Get friends. Get a frisbee. Go outside. Throw. Catch. Repeat until bored. Your university WILL have a frisbee society. If it doesn’t, double check you are not studying in a monastery or something. And even then, the abbot will probably be well up for a game.