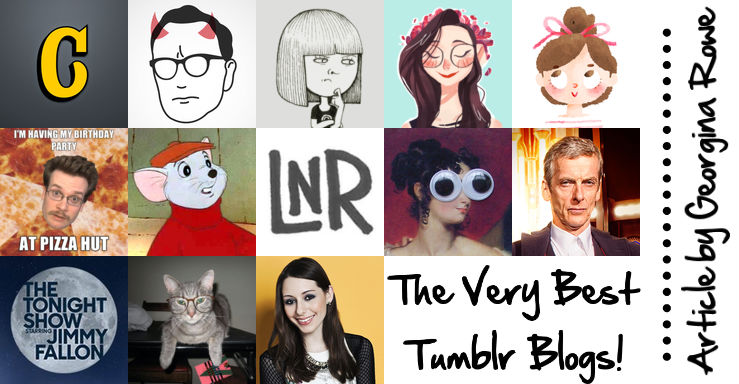 Recently, here at The Student Pocket Guide, we’ve started a Tumblr account (shameless plug) and were astounded by the amount of talent which can be found there. I mean, yes there are talented people everywhere you look, but on Tumblr fangirls and artists seamlessly coexist (sometimes overlapping), and some truly talented individuals post their work for the internet to see. There are also hilarious comedy accounts that will literally make you Laugh Out Loud, and official Tumblr blogs which interact on an amazing level with the fans around them.

Any-hoo, here’s a list of the very best accounts (that we’ve found, please don’t shoot us Internet) which we think are worthy of a lot of attention. So take a look! (Also, they’re conveniently categorized for your enjoyment – you’re welcome)

Cracked.com is a comedy superpower which roams the internet with its great website, YouTube channel and Tumblr account. It consists of a massive team of comedians who spew out written, video and audio content in the form of articles, sketches and a podcast. They cover a really wide variety of topics, ranging from pop culture to news discussions, so it’s worth a look.

Clients from Hell is a blog which transcribes the experiences of freelancers and other employees who are treated badly or otherwise encounter hilarious situations with clients. There are so many great examples, and you can even send posts yourself if something similar has happened to you.

These three artists are great – We discovered them through various means and love every bit of their work. Marija creates great drawings which are almost photo-realistic they are that good. Marion designs fantastic fan art for a multitude of TV shows and fandoms. Irena is an artist who draws for magazines and galleries, posting all of her work (including a project about the fan-funded Veronica Mars movie) on Tumblr. Check them all out!

All the novels that both of these authors have written are great, but that’s not really the reason that they’re included them on this list. Many authors are on Tumblr, but they are quite passive and don’t really become integrated in the community. However both John Green and Rainbow Rowell interact with everybody, tracking down fan art of their books and letting everyone know about it, or in John Green’s case finding posts which people hope he’ll never find and letting them know that he did.

Last Night’s Reading is a Tumblr blog managed by Kate Gavino which showcases some fantastic drawings of authors, accompanied by a quote that they’ve said at a New York book event. Very niche, but very awesome for those book fans out there.

Googly Eye Books is a blog in which the contributors attach googly eyes to figures on the front of book covers, photograph them and accompany them with a slightly warped quote from the book in question which aligns with the blogs theme. You kind of have to see it to know what we mean!

The next blog is one which I referred to in my introduction. One thing about Doctor Who Official is that it seems to be one of the most interactive “official” accounts out there. They pose challenges such as ’30 Days of Summer’ Doctor Who questions, including questions like “Who is your favourite Doctor Who-related Tumblr that isn’t us?” (which you can answer tomorrow if you join us on Tumblr). Lots of Who fun for all!

If you don’t already know, The Tonight Show is a talk show which has been running in the US for 60 years (really, it began in 1954!). It changes hands from time to time and at the moment it is being hosted by Jimmy Fallon, a comedian who got his start from Saturday Night Live. Fallon Tonight GIFs is a Tumblr account run by some of his staff who create the funniest GIFs which summarise the show perfectly.

I suppose some would consider Librarian Wardrobe more of a book blog (including Tumblr itself, it would seem). However its included here because not only do they show you the outfits sported by librarians all across the world but they are making a point – that they don’t have to fit into the given stereotypes.

The Style Line is the go to Tumblr for any fashionista looking for outfit inspiration in unusual places. It’s a fashion blog which shares stories and styles alike from all over the world aiming to inspire and showcase the very best of fashion.

So that’s it! The very best Tumblr accounts, according to SPG, which hopefully will inspire you to join this great social media site. Again, if you do choose to join (or if you’re already there, in which case wooo! Go you!), then make sure to follow our blog at TheStudentPocketGuide.Tumblr.com. And whilst you’re there, leave us an ask (we do so love feedback!).