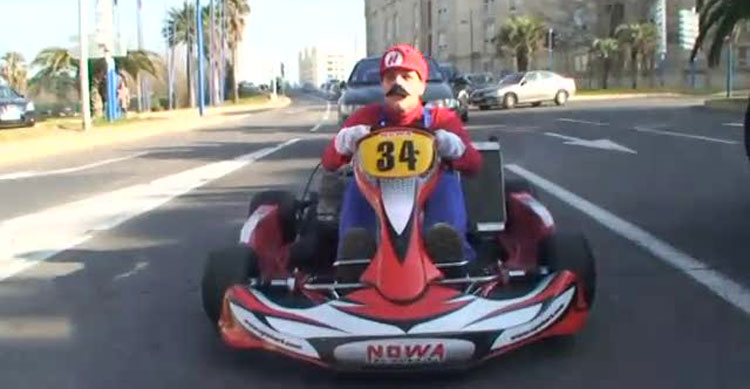 Considering YouTube was created in 2007, has over 1 billion unique users with 100 hours of video uploaded every minute, it’s easy to see how we procrastinate by browsing videos online. Our guess is you’ve seen one of these videos (more than once) “Charlie bit my finger”, “Ultimate Dog Tease”, “Dramatic Chipmunk”?

The Student Pocket Guide are fans of everything funny, creative and internet related, and it’s even better when they are all combined with a little bit of nostalgia. Mario Kart & Pac Man are games that (most of us) grew up with as children, and even if you are a bit young for that you really should still know what we’re talking about. These sorts of retro games are coming back into fashion, and you can buy an updated Mario Kart game on every platform these days!

One YouTuber has recreated these classic games and filmed them alongside his friends, with hilarious end results. Remi Gaillard began his YouTube fame after losing his job at a shoe shop and turning to his mischievous nature to filming pranks on the public in his spare time. This was defiantly a wise move as he has since been globally recognised for it. His YouTube channel rocketed to fame and now as a collective has received over a BILLION views and is ranked the 104th most popular YouTube channel. Using his great costume making skills and unique ideas he’s transformed Mario Kart & Pac Man into real life games. The resemblance is uncanny.

Captured on hidden camera for his YouTube channel, Remi has caused havoc on the streets of France with many of his pranks. Some people don’t see the funny side of throwing bananas out of a Go Kart and chasing ghosts through supermarkets. Remi has received some backlash, being hit by an angry golfer and being arrested can’t have been one of his highlights. The clips are edited with images and sound used in the game which just adds even more humour to the idea. Don’t let us give it away- check it out for yourself here:

As well as Remi’s pranks YouTube is awash with funny costume parodies, what is it about people dressing up that makes such great watching? Another favourite is the Matrix Ping Pong video – They used a black backdrop with people dressed in black Morphsuits to create Matrix style ‘special effects’, which adds a less serious and more humorous feel than doing it with a computer! In an age where technology can take over a bit too much it’s sometimes nice to go back to basics.

The Student Pocket Guide has also harnessed their very own cheesy creativity using inspiration from these Youtubers. Using human Kung Fu experts as actors, the infamous characters Ryu from Street Fighter and Darth Vader from Star Wars have been brought to life and fight it out to the death. Accompanied by cheesy sound effects, inventive and highly technical special effects (black Morphsuits – see if you can spot them) watch the video to see who will be victorious – will Vader’s power beat Ryu’s Kung Fu skills?

*Please have no fear no fictional characters were harmed in the making.