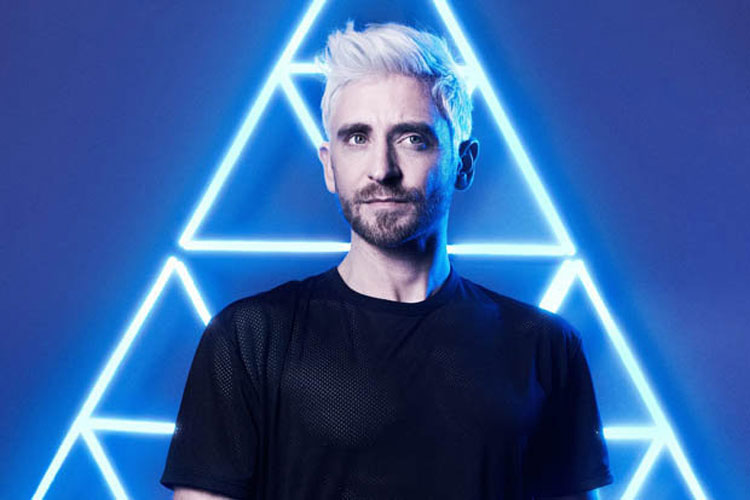 Dan Stein aka DJ Fresh has already had three huge hits in 2014 and there is no sign of him slowing down just yet. With a single featuring Ellie Goulding due out in September we caught up with him to talk about being a proud parent, gardening and perfection.

Flashlight ft Ellie Goulding is out October 5th, you are familiar with collaborating with other artists. Who has been your favourite person to collaborate with?

Ellie actually and although this was a while ago, Neil Tennant from The Pet Shop Boys.

What was it about Flashlight that made you want to rework it?
Well, basically the version we did for Ellie’s album, everyone was really into but it was more of an ‘album’ version and wouldn’t really work in a club. At that point I was in the middle of doing my own album and I am an absolute perfectionist and I thought the track just wasn’t the full potential of what I thought it could be. So we had the opportunity to re-record some of the vocals with her and had some time going over it until I was totally happy with it as a single.

So you really made it your own on that one?
Yeah, I think it added another dimension to the track that made it even better than it was before.

Yeah definitely, we’ve seen that there has been some really great feedback on that which is always a good thing! It is your third single out this year, are you ever going to slow down?

Simple answer on that one!
I guess I’m much more into the idea of doing singles rather than albums. It’s frustrating really that I can’t get out more individual tracks. I’m doing this album out later in the year which is more like a compilation album, it has a bunch of new stuff on it but ultimately it’s a full on dance floor CD you can put on before you go out.

Talking of going out, you have been at Mallorca & Ibiza Rocks plus many more festivals over the summer, what track really gets the crowd going the most?
Err, I’d say most probably ‘Bounce’, ‘Dibby Sound’, I’ve got a new track with Steve Aoki and Tinie Tempah that smashes it when you play it out. ‘Hot Right Now’ obviously, always goes down well. I’m lucky that I have quite a few tracks that are bassy dance floor tracks, it’s really great when you’re DJing to have that.

So the crowd is just constantly going?
Yeah, it really is great. We generally only play hour sets because it’s super fast and furious, people kinda get worn out after a bit but that’s what I’m into.

You did mention there about Steve Aoki, we have spied on your Instagram and seen you two hanging out. So is there a collaboration in the works?
Yeah, there’s a track with Tinie Tempah and Steve (Aoki) that we’re working on which will probably come out in the next six months or so, it is not actually finished yet.

So you are definitely not going to be chilling out when it gets to winter time?
Doesn’t look like it no!

We’ve got to ask, as one of the founders of Bad Company, will the band be getting back together any time soon?
I’m not really sure, it’s something I really want to do and we’ve been tossing the idea around and it’s really a question of how to keep the vibe of that whole thing and translate it to now. So we’re still talking about it and it is something we would like to see happen.

You are currently working on your fourth album, have you got a lot left to do?
Yeah, loads!

Does an album ever feel finished?
I think you know you have to draw a line under it at some point and I have a way of drawing a line under things because I could quite easily go round in circles, changing things. Sometimes it’s about not over producing as well, so yeah, I have this line which is the line between being over produced and not produced enough and I try to stick to that.

That’s where the perfectionist comes out again?
Yes, I could never be a gardener!

You’d be out there with your nail scissors!
I’d be going round and round in circles.

As one of the founders of Breakbeat Kaos what do you prefer, working with other acts or doing your own thing?
I’d say both, I miss working with the other acts and It’s really cool seeing Sigma doing so well at the moment. It is funny because a year ago I was mentioning their name and people not knowing who they were to now people thinking, wow they’re amazing which is what I thought five years ago! It’s really great for people to realise their potential like that. It’s a great feeling to see that happen.

Do you feel like a proud parent?
Pretty much yeah!

You seem to be a man of many trades, you have a residency on Capital FM, is it time to be a radio DJ?
I don’t think it’s something I want to do in the long term but I love working with them. They’re trying to embrace dance and urban music more. I’ve always been interested in drawing people’s attention to new stuff and that’s what the shows about and it’s great to be involved in that.

Being a radio DJ you don’t have that audience like at a show or festival is that maybe why you wouldn’t do it full time?
Yeah, I guess so; it’s just a very different world. I’ve never been one of those DJ’s to have a massive record collection and I haven’t got a massive catalogue of knowledge about music historically. I tend to be interested in what’s happening right now and what’s going to happen next. I’m very fussy about stuff, I could listen to 100 tracks and there might be two or three that I’m really feeling. As a radio DJ you need to represent a massive range of music and knowledge, whereas I’m a producer so I’m more focused on a narrow range of music. It’s good doing what I’m doing at Capital because it is a short show and I only do it once a month so it works for me.

What exciting things have you got in the pipeline that you can tell us about?
I’m working on a new DJ show which will be premiered at Pukklepop festival that is really exciting; it’s a whole new stage show with visuals and crazy technical stuff, we’re bringing that to festivals in the UK next year. I’m also working on new stuff with Diplo, Steve Aoki and Danny Howard which will be on the new album at the end of the year.

Thanks for your time Dan and have a great rest of the summer!