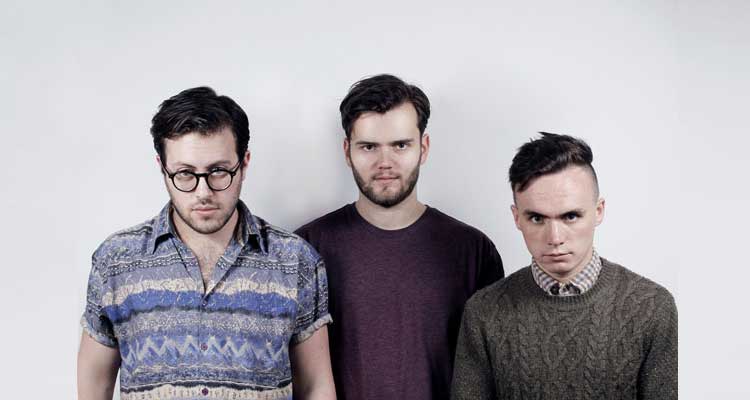 Prides may not be headlining arenas just yet, but the trio’s jubilant and almost hymnal-sounding synth pop are destined to be sung by large congregations. We caught up with lead singer Stewart Brock to discuss their eagerly anticipated album, first headline tour and the Scottish referendum!

‘Out of the Blue’ [the band’s new single] is out December 8th! Why did you feel it was the perfect track to release?

‘Out of the Blue’ was actually one of the first tracks we wrote together as Prides. It was the first track we put up as a demo at the beginning of last year, so we’re happy it’s finally getting a proper release. It was one of the first tracks that really made us think we’d found what we were looking for – in terms of sound and the type of music we wanted to be writing. So, it’s a bit of a personal anthem for us and always a fun one to play live!

We’ve seen a lot of people tweeting about the band’s upcoming album. How close are you to completing it?
We’re very close. Actually, we’re pretty much done! Fingers crossed we’ll get a few more singles out, and then the album during the first part of next year.

Is the anticipation from fans something you worry about?
You don’t want to keep people waiting too long. However, we want to make sure that we deliver the best tracks that we can, which can sometimes take a lot longer than you would usually like (laughs). If we deliver the best album we can, hopefully people will let us off.

Do you think the material you’ve released thus far is reflective of what to expect from the album? Or, will any of the tracks surprise fans?
There will be a bit of both! The singles are definitely a good indicator of the kind of stuff that we generally write. However, I think there’s also going to be some stuff people won’t expect from us – some slower tracks and more atmosphericy stuff. Hopefully, that will go down well.

Obviously, we had to do some research prior to this interview and we found the music world can be a tricky place for trios…Blink 182, The Police, and even the bloody Sugababes have succumb to inner fighting and animosity. Does your relationship ever feel strained with your hectic schedule?
(Laughs) Umm…we’re pretty lucky! Lewis [Gardner] and I have known each other for ten years now, so we’re well-versed in each other’s nuances.

Oh, is that what we’re calling them?
(Laughs) Yeah! I think generally we’re pretty easy-going guys, so there are no real fallouts…not yet anyway! We get on really well, so touring is great fun.

All sounds quite amicable in the Prides camp. However, let us put this tricky situation to you – you’re at a theme park and the ride only has two seats. Who would have to sit on their own or even worse hold the bags?
Argh…

You’ve got to pick one Stew, it can be you if you want!
(Laughs) We’re quite lucky there…Lewis would be the bag man because he’s not one for massive amounts of adrenaline. He’d be alright with the bags, and Callum [Wiseman] and I would take the seats.

Your press material describes you as ‘the pop that it’s ok to like.’ However, we’d like to know the most embarrassing records you’ve bought?
There’s far too many to list. The first single I ever bought was Hanson’s ‘MMMBop’, which I think is a pretty good one.

Who’s sweaty the crowd or the band?
Everybody by the end of it, but certainly us!

Naturally, as one of Glasgow’s finest exports, we must finish by asking are you happy with Scotland’s choice to stay within Britain?
It was obviously a close call and a really heated debate in Scotland. A lot of people have been left disappointed, but I think the biggest thing now is to band together and try to move forward.

Pride’s new single ‘Out of the Blue’ is out December 8th. The band’s headline tour starts October 17th at The Kazimier, Liverpool. Tickets can be found at www.pridesband.com.