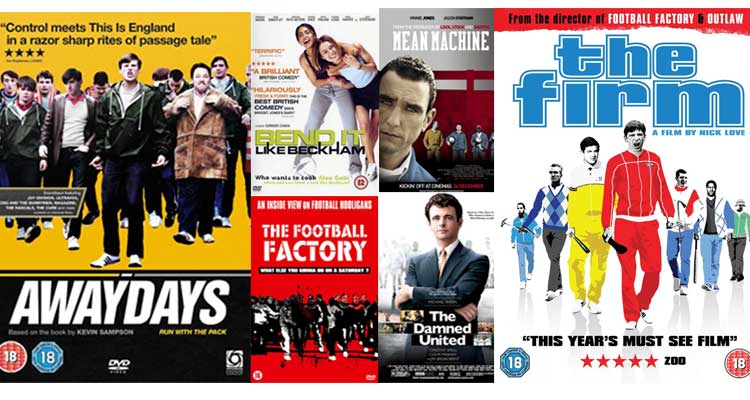 With the transfer deadline closing today, and the hype that has surrounded the World Cup this year, we have compiled a list of football films for you to watch to really get in the mood. Football films are rarely as good as matches so maybe calling it a ‘top ten’ is stretching it a bit!

The Class of ’92 (2013): This is more of a documentary than a film but looks at the rise of six young Manchester United stars and their careers. Starring David Beckham, Nicky Butt, Ryan Giggs, Gary Neville, Phil Neville, and Paul Scholes. The film looks at the highs and lows of football during 1992- 1999 and the social and cultural changes in Britain at that time.

Mike Bassett: England Manager (2001): A comedy following Mike Bassett from his rise as Norwich City manager to England manager. It is in the style of a fly on the wall fictional documentary and looks at football manager stereotypes and how the press report on the England football team. Also one to watch for the cameo appearances of Pele and Ronalo.

Mean Machine (2001): Starring former footballer Vinnie Jones, Mean Machine is an adaptation of ‘The Longest Yard’. Vinnie plays Danny Meehan a football star that is jailed for match fixing. Once inside he leads a group of inmates to a match with the prison guards. Worth a watch purely because half the cast of Lock, Stock and Two Smoking Barrels are reunited.

Bend It Like Beckham (2002): This film is a very lighthearted comedy about a female football player (Jess) who loves the sport but is forbidden to play by her family. So, she sneaks off to play, falls in love and makes some new friends.

The Dammed United (2009): The Dammed United is the story of Brian Clough and his 44 day stint as manager of Leeds United. It also follows his later years at Derby County, the rivalry with a previous Leeds United boss and explores Clough’s relationship with his assistant, Peter Taylor.

Goal! (2005): Santiago Munez, a footballer in a regional club gets scouted and transferred to Newcastle United. When offered a transfer to Madrid it tests his ties to his family and loyalty to friends. The film was made with the full co-operation with FIFA so real teams and players are used throughout.

The Football Factory (2004): Well, less about Football the game, this film is more about the violence and hooligans that associate themselves with footy. Starring Danny Dyer, it never did receive great reviews being hailed a mixture between Trainspotting and Fight Club but with Burberry Hats. Oh Dear.

The Firm (2009): Once again, a film about football violence. This time the plot revolves around the West Ham United firm and 17 year old Dom who is infatuated with the footy violence scene, but hates the violence itself. How does that work? It is a remake of the 1988 TV drama of the same name and is worth watching for the 80’s soundtrack and dodgy tracksuits.

Green Street (2005): ANOTHER football film about hooliganism. The story sees Matt Buckner (Elijah Wood) come over from the states and befriend Pete (Charlie Hunnam). Pete is a cockney who runs a local football hooligan firm and the film is really about toughening Matt up. It is purely worth a watch because the actor Charlie Hunnam is originally from Austrailia and his cockney accent just keeps you amused for the whole film!

(All images sourced from Google images)