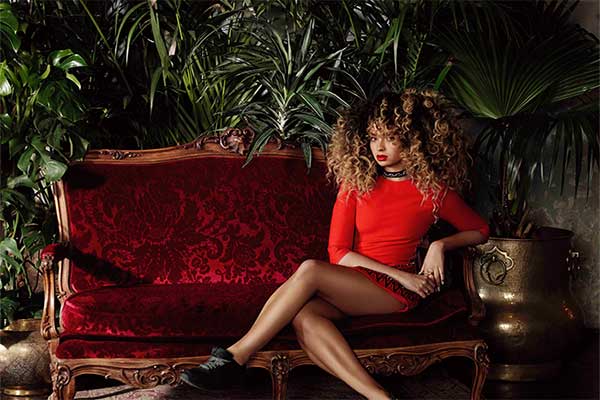 London soul songstress and BRIT award winner, Ella Eyre’s rapid rise continues. Since proving herself to be one of the UK’s most enthralling a captivating debut female singers, Ella has been wowing the crowds throughout the UK having sold out one headline tour and about to embark on her second. We caught up with Ella to talk about her rise to fame, future collaborations and America!

Hi Ella, how are you?

Really well thank you, how are you?

I’m great thanks. What are you up to?
I’m currently in the middle of a field, on the Bestival site. I’m doing a party tonight called Pilton Party, which is run by Michael Eavis who runs Glastonbury. It’s a thank you to all the locals for putting up with Glastonbury this year.

Who else is playing?
Just me, Foals and Fast Decline.

It’s been a crazy summer for you, what’s been your highlight?
It’s been an incredible summer, we’ve done so many festivals, it’s been awesome! I think our favourite festival out of them all, was probably Pukkelpop in Belgium. Mainly because I’ve never played a proper big show out in Belgium and the crowd turnout was absolutely amazing. The atmosphere was so cool, and also being in a country like Belgium was so much fun.

How does playing to a crowd at a festival, compare to playing to people in a small intimate venue?
They’re very different; everyone is there for different reasons. Because there are so many acts on one bill, everybody’s got their favourites and so a lot of the time you’re playing to people that don’t know your stuff or who you are. If anything, it makes it slightly more interesting because you’ve got to convert them, convince them that you’re worth listening to. Even if people don’t like my music I like them to have fun and enjoy it.

Which of your own tracks do you prefer playing live?
Hmm, one of my favourite tracks is actually my new single ‘Comeback’, mainly because people like to get involved. It’s a fun song for angry people, about an angry situation and I think a lot of people can relate to it. It goes down really well.

Can you tell us the story behind it…?
Ha yeah, the story to ‘Comeback’ is about being taken advantage of by somebody that you care about, and then eventually you’re angry about the whole situation but it’s almost like saying “F*ck it, it doesn’t matter because they’ll come back anyway”. I wrote the song when I was 16, it happened quite a while ago and it’s about an ex boyfriend. I think the statement is so true regardless of who it’s about. I knew plenty of people when I was that age who had been cheated on and mistreated.  I wrote that song as a motivational song to motivate people to realise that they’re better than the situation they are in.

It’s very admirable because you’ve turned a negative situation into an energetic, up-tempo sound.  Lets talk about the video… For me, it’s like watching a short movie that makes you want to dance, I love it! Jon Jon Augustivo directed it – How much input did you have in the video?
I had quite a lot of input really because Jon Jon originally sent a different script, and I really liked him as a Director, but I wasn’t convinced about the script. We had a conversation over the phone and we spoke about various references and ideas. I knew that with this one, I wanted to have an actual story line. I wanted  people to actually relate to what I was saying. My first video ‘If I Go’ was slightly more artistically driven rather than commentated, if you know what I mean? With ‘Comeback’, I knew that I wanted it to be an angry situation, and that I wanted there to be a revenge plot, but also in a sort of innocent way. Everybody has these angry moments, and the whole idea of ‘Comeback’ is that it’s imagining what I would do if I had the chance. So I don’t actually end up smashing up his house and blowing up his car, it’s all going on in my head and I think a lot of people have those moments where they wish there was something they could do to make them feel the pain that they were feeling. I’m just representing what every girl would feel.

I’m guessing that the video cost quite a lot to produce, because there are quite a lot of props that get smashed, torn and burnt!
Hahaha, it was a lot of fun! The funny thing for me was when we got to the house and they said “you can smash everything but the chandelier”. I was like “Everything…?” And they said “yeah” I was like “Can I cut up the sofa?” They were like “yeah”, I said “can I smash the TV?” they were like “yeah”, I was like “OH MY GOD”! It was amazing!

I don’t want to change the subject too much, but can you ever see yourself getting into acting? Because for me, that really did seem like a short movie!
Hahaha, well when I went to the Brit School, I studied Musical Theatre so I trained in acting, but I never thought I was actually that good at it. I’m passionate about the film and I’m passionate about the situation, so therefore it’s actually quite an easy situation to act out because I’ve been through it.

Whilst we’re on the subject of films, what’s your favourite?
‘Catch Me If You Can’ by Leonardo Dicaprio. And I love ‘Wolf of Wall Street’ as well!

So, you’ve got your second UK headlining tour kicking off next month, how does that feel, you must be really pumped up?
Oh I’m so pumped up, it’s quite surreal to think that I’m on my second tour and I haven’t really released my album yet! I did the first tour when I released my first single, and for that to sell out was quite surreal, incredibly flattering and so much fun.

Does the fame side of things add any pressure and if so, how are you dealing with it?
I don’t know whether it’s adding any pressure or not, I think because it’s happening quite gradually for me, I’m being able to get used to it. I think it’s important to surround yourself with grounded and encouraging people. If you surround yourself with the right people, it’s quite difficult to lose yourself really. My mum’s particularly on my case about most things, she still tells me off for swearing every now and again bless her.  It’s quite weird because I don’t consider myself famous at all and I find it quite strange, but also incredibly flattering when someone recognises me.

I definitely think you’re famous! You’ve got a fair few views on your videos… Millions and millions! Hahaha How quickly has this all happened for you?
Not that quickly. By the time my album is released it would’ve been in the making for three years. It’s taken its time and I’ve learnt a lot about myself as an artist. I started when I was 15 or 16, and I’m 20 now, so it’s taken a while. I think I’ve had moments of impatience in wanting to release and wanting to get the ball rolling, but I think I’ve had to learn as I go along, that it’s not about how long it takes, it’s about the quality of what you’re doing. I think back to all the times that I’ve been impatient, and wanted to chop things, then and there and I just think how unprepared I was at the time. And I certainly feel that I am getting closer to that point now.

Is America on the cards for you?
Absolutely! I’m actually going on tour with Bastille in November – I’m supporting them on their North American tour which should be absolutely amazing. I love those guys, they’ve supported me from a really early stage and it’s such a pleasure to be able to join them on their American tour.

Wow, I didn’t know that. I was trying to work out what the scenario was with America, because the video to ‘Comeback’ was shot there…
Yeah, I’ve been out there and I’ve met my American label and we’re all really excited. I can’t wait to get the ball rolling over there to be honest, hopefully it will go down well, I LOVE AMERICA and I love travelling. I went to Australia with Rudimental for the Future Music Festival and I can’t wait to go over there as myself with my band.

What about collaborations… Are there any in the pipeline?
I’ve been doing a bit of work with DJ Fresh in the studio. I also did a bit of writing for Sigma, I wrote the latest Paloma Faith track that they have out at the moment called ‘Changing’. It’s been awesome to collaborate on projects that aren’t necessarily my own. I’ve done a bit of work with Rudimental for their next album as well so… you’ll see.

Who inspires you musically?
One of my main inspirations was Basement Jaxx from when I was a kid. It was the first album I ever bought and like nothing I had ever heard before. I was a big fan of S Club 7 and all that, but when I finally listened to Basement Jaxx, I was like “sick”, they’re just so creative and innovative. People like that inspired me because they’re not afraid to push the boundaries.

Can you tell us a secret about yourself?
I have a phobia of balloons. It’s the rubber ones, they’re f*cking scary!

What is your ultimate goal in life and as an artist?
Never let it end I guess. In any respect, even when I stop being an artist, I wanna keep writing, I love it, it helps me and I enjoy it. I wanna be in a position to be able to do what I do for a very, very, very long time.

Well I wish you the very best of luck, thank you for your time.
Thank you, bye.