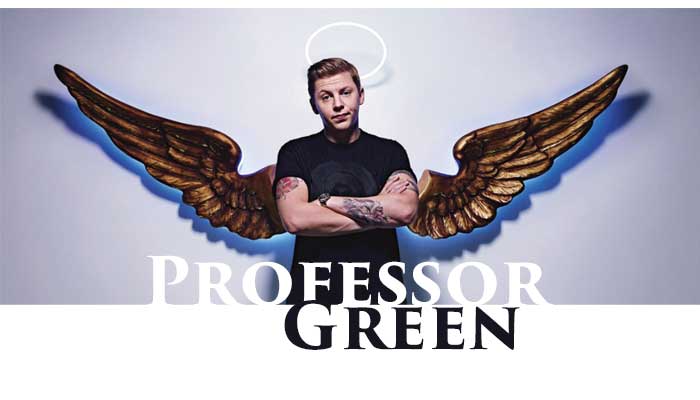 Stephen Manderson, better known as Professor Green, has left a hectic 18 months behind him and is back with a new album which follows on from 2011’s “At Your Inconvenience”.  It is the next step in a career that has seen him amass over two million record sales in the UK alone. We caught up with Professor Green to talk what it’s like growing up in public, anti-social media and Nandos!

Hi Stephen! How are you?

Great, so what are you up to?
Ahh, loads of interviews, back on the promo trail now I’ve got some music to talk about so lots of talking.

Well let’s get talking  then!
Your new single Lullaby is officially out in September, we have listened to it and the video has been out for a while. What has the reaction been like?
It has been incredible you know, it really has and it seems to connect with people. People really appreciate the meaning of it.

Lullaby is a song about depression but it’s not a depressing song, it’s about the result of depression and the most important lines of the song are “things always change as long as you give them a chance”. The sad thing is when people don’t give things a chance to change, look at Robin Williams, my Dad they make a choice to end things before they have a chance to change, which is sad.

The track features Tori Kelly and you’re no stranger to collaborations, who would be your dream artist to collaborate with or have you worked with them?
I really don’t know, I’ve enjoyed working with so many people Emeli (Sandé) is incredible we’ve done five songs together so far, that’s definitely a working relationship that works very well. I’ve enjoyed working with so many people; it’s more about meeting cool people and the collaborations and music happening organically.

The last time we spoke to you was back in 2011, which is quite a while a go now! You said then that you would like to work with Adele is that something in the pipeline?
Erm, na not at the moment. I mean we talk, she knows my first name. She’s really good friends with Kid Harpoon who I did a lot on this album with but nothing is set in stone as of yet.

The title of your new album is “Growing Up In Public”. You’ve certainly done a lot of that, one part of it was that you took a step back from Twitter is this a sign of Pro Green getting old?
No definitely not! It’s just part of Pro Green getting a bit wiser, which I guess does happen with age it’s not something you are born with. Some people do seem to be born wiser than others however. It’s just a case of I’m still going to be the same Pro Green on Twitter I’m just going to be more choosy with what I post. So when I do post something that I want people to read it won’t be amongst a whole heap of mundane Tweets about when I last used the toilet or fed my dog.

Social Media is so big now, it is a great way to interact with everyone but does it feel like you have two million people following you around in your pocket all day?
It’s not even that it’s just that I don’t think it’s good for anyone to have access to that many people, it’s a lot of responsibility to be honest.  The thing is, in normal day to day life for the most part you have some control over who you bump into depending on your environment. On Twitter, you don’t have that control, people who you would never usually concern yourself with can spend all day talking about how much they hate you and saying horrible stuff that you don’t really need to bother with. Also what I found with social media was that a lot of people were doing what I did, just posting a lot of pointless stuff because they were bored. It’s just information that you don’t need in your head. There are really valid reasons for social media and I think used properly its brilliant. It can almost become anti-social media at a point; people spend so long on their phones they forget to live in the real world. I hope we don’t end up with a generation of socially inept children, the art of conversation is important.

So, can you tell us a bit more about your new album?
Well, yeah, but I think one of the best things about music is just sitting down and listening to an album and working out what it means to you. I hate when people tell you what every song is about, it is important to let people decide for themselves. That is one of the best things about music. It is definitely an upbeat album; Lullaby is the only ballad on there.

You have come a long way since your days growing up in Hackney, has anything changed when it comes to what has inspired your music now?
Na, it really is the same stuff. Its just life that inspires me and that is what’s good about all the good and bad stuff that has happened over the last 18 months. It has given me a whole heap of stuff to put on the album.

You are touring in November onwards; do you have any rituals before you go on stage?
Yes, I always have a shot with the band and then I take a bottle of Jack Daniels on stage and usually finish it before the end of the show, which is quite a worry!

Haha, does that mean you get nervous or excited?
Erm, you know what I used to get nervous and I’m pretty sure it’s still the same feeling, you just interpret it differently. Now the nerves feel more like excitement.

What about when you play new material on tour, do you get nervous or excited for that?
Kind of indifferent, I’m just intrigued. You want to see what the reaction is. Also it takes a while to learn how to perform songs to the crowds.

Who do you consider to be you most important musical influences?
I listen to so much music you know, from Nirvana to Biggie to Bonobo to Fink. So many different artists and they all play a part in the music I make. There is a lot of musical influence in what I do; the variation of my influences definitely separates me from other artists.

You have been in the music industry a decent amount of time and the industry is always changing. If you were starting out now how do you think it would be different for you?
The platforms are still there to get yourself known so I’m not sure it would be different. Obviously the Internet is an even bigger part of things now than it was and the Radio game is a lot harder. It’s hard enough for us that have been in the industry a while to get a single on the Radio. Then I guess you are only a new artist once and that excitement helps you out a lot.

What has been the highlight of your career so far?
There have been loads! Getting a number one with Emelie Sandé for read “Read All About It” was incredible. The albums and singles being a success are always a highlight. Also performing on Jools Holland and The X Factor. Supporting The Stone Roses, which was the hardest gig I’ve ever had but I won the crowd over. There were 75,000 people basically jeering more than they were cheering when I came out on stage and managing to win them over was a proud moment. It’s easy to perform to your own crowd, people have paid money to see you which generally means they are going to have a good time. When you are supporting a band like The Stone Roses with fans that already have an opinion of you, which is definitely something to overcome and to be proud of when you do.

We’ve got a little light-hearted question for you now. You are very lucky to have a Black Nandos card, what is your favourite thing to order?
It depends on if I’m being sensible with what I eat or not, if I am, I will get a quarter chicken and ratatouille always extra hot. If I’m not being sensible then I’ll get half chicken, peri peri chips, coleslaw and corn.

Ooh, that does sound good!
I know I kind of want that now!

Well, you can’t be being healthy on that day then!
Ahh, I don’t know. Probably not actually, I turn 31 the day before we go on tour so I’m going to be celebrating every night of the tour and I’ll need the chips to soak up some of the alcohol.

Do you have any future plans we should know about?
I’m just going to be getting into the next album as quickly as possible after this one. It was nice taking a break between the second album “At Your Inconvenience” and now. I definitely won’t be leaving such a big gap between this album and the next one so really want to get on with it.

Ahh brilliant we can look forward to that!
Thanks for chatting with us Stephen, good luck!
No problems!