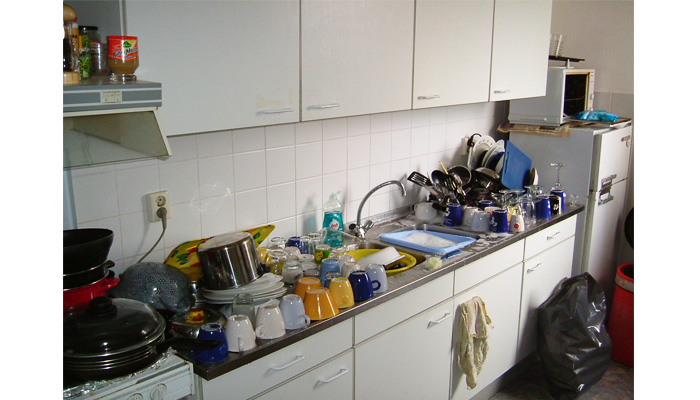 A Guide To Student Digs

A Guide To Student Digs by Jack Shannon

Ok, you’ve done it. You survived the first year of university education. You have battled fresher’s flu, fire alarms at 3am and that creepy guy in a black trench coat who collects animal skulls. But it’s done. You’re finally ready to move out of student halls and into your very own, brand-new student house!  There will be BBQS! House parties! You might even get to see your hot new housemate naked! But life in student digs isn’t all BBQS and naked housemates. There may be trouble ahead, but fortunately like a kleptomaniac chiropractor, the SPG has your back!

Make sure you take photos of your new house BEFORE you move all your stuff in. Chances are you are going to be moving into a fairly well-loved house which has been “enjoyed” by a range of students before you. Trying to persuade your landlord that the ceiling has always been that colour won’t be a fun or easy task. Taking photos of any existing damage, marks or wear and tear on the place will mean that getting your deposit back is a LOT easier.

Make a game out of it by running round the place like paparazzi “Wonky lamp! Wonky lamp! Are you still having a sexy affair with the suspicious stain on the carpet!” click click click…

Most student houses come complete with a mixture of hodge-podge tat from various generations of students that have left their junk there. So your landlord might not mind if you accidently drop a Saved By The Bell mug from the mid 90’s. However, if she finds that the television has gone walkabouts or you lost the lawnmower in the shed on a drunken bet, they won’t be so pleased.

A full inventory also makes it quite a bit harder for a landlord to claim you lost a priceless ming vase.

From your university, you should be able to obtain an exemption certificate that basically says “Everyone in this house is a student. We don’t pay council tax. Deal.”

Once you have this magical piece of paper, MAKE SURE YOU LET THE COUNCIL KNOW! City Councils tend to be fairly bureaucratic places, so make life easier on both of you by letting them know who is living in the property.

BILLS ARE BORING.
BUT HAVING YOUR ELECTRICITY CUT OFF IS EVEN WORSE.

Before you move in, ask your landlord who the current providers are for your electricity, water, gas ect. Call them up or write to them to let them know when you moved into the property ASAP. That way, you won’t get the massive bill a previous occupant ran up from leaving the heating on for “Jungle Week” last summer. Also, please throw away the stained Tarzan outfit he left.

TV LICENCES.
IF YOU WATCH LIVE TV, YOU HAVE TO PAY IT.

First off all, let’s clear up a few myths:

2)      It doesn’t matter if your are watching it online, you still have to pay.

3)      TV licences only count for LIVE TV. So iPlayer, 4OD, Youtube etc are all fine without a licence.

5)      TV Licence enforcement people are like vampires. They can’t come into your house unless you invite them. They are not the police, and unless they have a warrant you are fully within your rights to close the door.

Student houses are often a little bit lax in paying their TV licence. Consequently, they tend to be the frequent target of mail-outs, leaflets and people knocking on the door.

If you are sent a snotty letter along the lines of “WE KNOW YOU HAVE A TtELLY! GIVE US YOUR MONEY OR ELSE!” Call them up and politely explain that you do not watch live TV and that you do not take kindly to threatening letters.

If you do want to watch live TV, you can buy a licence online HERE.

DO THE WASHING UP ONCE IN A WHILE.

Seriously, do the flipping washing up! Things go a lot easier if you do a little bit every day, instead of trying to wash up 9 million green and furry bowls which have sprouted legs and formed their own techno-punk fusion band.

You will try to have a chore rota. It will fail miserably. You’ll agree that everyone will just tidy up as they go along. They won’t. By the end of the year you will be eating off of paper plates and serving baked beans from a fedora. I’m afraid that like those dodgy kebab menus it just kind of comes with the territory of being a student.